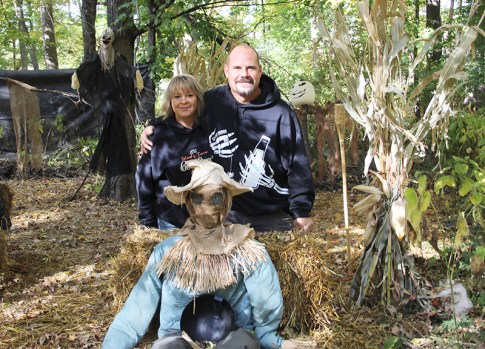 Kiersten and Josh Cornelius stand behind one of their scarecrows, Kiersten Cornelius estimates setting up for the project began a few months ago. Alex Guerrero/Albert Lea Tribune 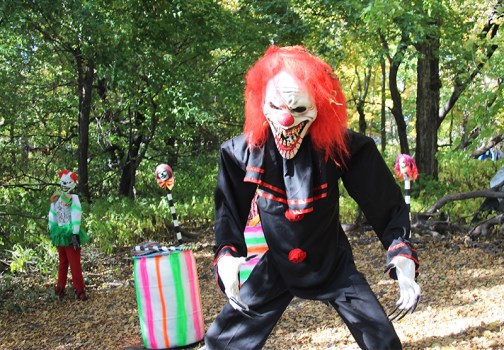 Scary clowns are in one part of the Island of Terror that opened last weekend in Maple Island. Alex Guerrero/Albert Lea Tribune 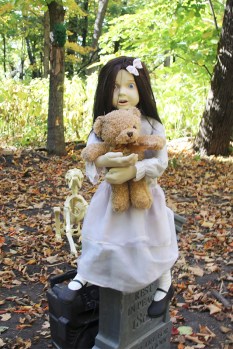 Cost is $15 a person, $7 for children under 15, and available for purchase at the door for cash only. Alex Guerrero/Albert Lea Tribune 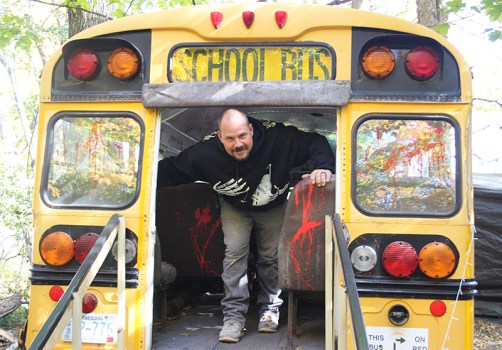 The tour will end by walking through an abandoned school bus. Alex Guerrero/Albert Lea Tribune

MAPLE ISLAND — Kiersten and Josh Cornelius are big fans of Halloween. And to show their appreciation, they’ve created an Island of Terror.

“We both enjoy Halloween — the scares it does and the creations you can make and the things you can do,” Josh Cornelius said.

His wife said she enjoys dressing up and getting scared.

“It’s just always been fun to me,” she said.

According to Josh Cornelius, the idea was something the two had talked about for a few years, and they actually did a hayride two years ago at Harmony Park.

But with all the events happening there, and the couple’s desire to do more than they could at that location, they moved their project to Maple Island.

The island features a scarecrow scene, a clown scene, a graveyard, spiders, a cemetery and saint scene and even an abandoned school bus.

Kiersten Cornelius said a lot of what was on display were things they made or purchased, including a fog machine.

The couple did not have an attraction last year because they hadn’t decided where to host it.

To get the amusement up and running this year, their work started a few months ago.

“We have plenty of actors that dress up in several different costumes that jump out at people,” Kiersten Cornelius said. “The animatronics.”

There will be people hiding behind trees and buildings or portraying different scenes.

He said every weekend would be different due to the availability of actors. Depending on costume availability, the two will figure out how to set up the scenes.

This was a labor of love for them.

“I like making things, coming up with the ideas that we’ve came up with,” Kiersten Cornelius said. “And obviously the reaction of people enjoying it and being scared. It’s just a lot of fun.”

The project has been a neighborhood affair.

“Our neighbor across the way has let us use that lot for the parking area,” her husband said.

And people were also volunteering to dress up and scare visitors, which was something they both enjoyed.

One of the hardest parts of setting up the area were getting cobwebs in place, and Kiersten noted the number of times she hit her thumb. The duo also had issues with the trail itself, particularly as deer kept running through.

And while they’ve only done it one weekend so far, the two received compliments on their back room, bus, animatronics, lighting and fog.

“We had really good comments on Facebook,” Kiersten Cornelius said. “We had a comment box put out, and … people really enjoyed it. We got all good comments back.”

Her husband estimated last weekend 182 visitors showed up, a turnout he described as “pretty decent” considering it was their first weekend and there were three homecomings in the area.

Besides being scared, people can socialize and purchase food from Smokin Bros BBQ and drinks from Geneva Bar & Grill.

“We’re good friends with all of them, and they just agreed to take a leap with us and help us out just for the accommodations,” Josh Cornelius said.

The couple plan to run it every weekend of the month and will provide hand-warmers, though they encourage everyone to dress appropriately, especially any actors who will be outside for a significant portion of the night.

Their goal is to expand their scenes every year.

And it’s not all about tricks for the duo, as they have a bucket of candy for visitors where they buy tickets.

“I’d like to say thank you to all the people that helped us out,” she said. “It’s amazing.”