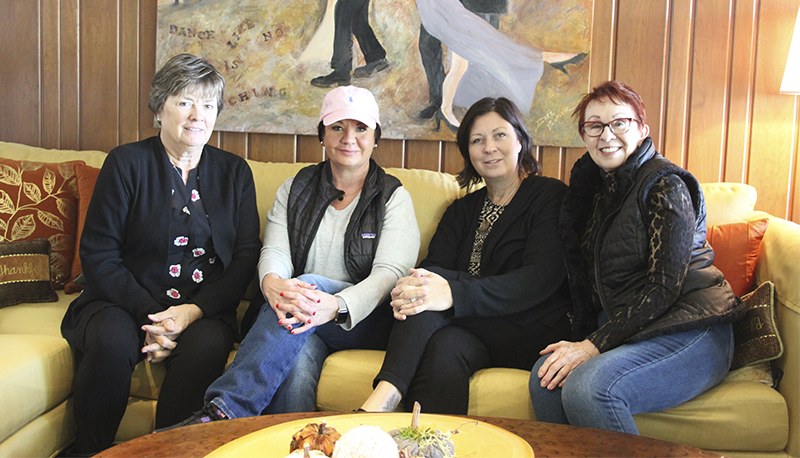 The Ball in the Mall is back — in a different way.

“It’s going to be a fabulous, fabulous night,” said Jean Eaton, adviser for the Nov. 5 event she described as a semi-formal “red-carpet event.”

“I think — especially after COVID — I think people are anxious to get out, get dressed up,” she said.

Eaton and her fellow co-chairs, including Holly Miller (decorations), Danielle and John Schipper (special events) and Marcia Sczublewski — are doing the ball as a fundraiser. Proceeds will go toward the expansion of medical services at the John & Susan Morrison Medical Plaza. She described the expansion as a collaborative effort between the Albert Lea Healthcare Coalition and MercyOne.

“Any build-out we have, or expansion, we will need to raise funds because that’s our building,” Eaton said.

They decided to hold a ball back in March, and they’re still arranging the event.

The theme is Autumn Elegance.

She said there will also be lots of candles and lower lighting.

Eaton wanted to throw a ball as Riverland Community College used to have one at the mall.

“It was always a huge success,” Eaton said. “It was always so much fun, and there hasn’t been anything happening like that for a long time for the whole community to attend.”

So her team thought this would be a great way to raise funds and awareness for the coalition.

Special events for the night include a silent auction, food, music and an opportunity for photos.

“We will have a professional photographer on-site to take pictures all night long,” Danielle Schipper said. “Then guests can either order that night or order the next day or probably within that first week.”

And then there are the auctions, both silent and live.

“People are still wanting to donate to the silent auction,” Eaton said.

Food from a variety of vendors, including Wedgewood Cove, Jersey Mike’s, Mocha & Mini’s, Fellers Ranch and Surley Brewing Co., will be on hand.

“Nobody will say there isn’t food,” she said.

The free bar will include wine, beer, soft drinks and water. The cash bar will have a bourbon sampling.

“That’s such a hot beverage right now for a lot of people,” Eaton said.

“I think a lot of people know Johnny,” Eaton said. “He’s a big draw in Minnesota. He plays just about everything.”

Sczublewski is on the silent auction committee and said as of Monday there were 89 items up for auction. There will also be live auction items, including a Montana getaway at a ski lodge; an Orange Lake, Orlando, condo; a one-year single membership to Wedgewood Cove; a B&B Cafe cinnamon roll office party and a round of golf for three with Ross Habben.

“The community support has been overwhelming as far as generously donating to the silent auction,” Sczublewski said.

“We’re basing this really off a big fundraiser that some of us go to in Minneapolis where they raise almost $1 million dollars and how they operate,” Eaton said, referring to the Junior Diabetes Research Foundation Hope Gala.

Sczublewski thanked everyone who already donated to the auctions.

Doors for the event at Northbridge Mall and the John & Susan Morrison Medical Plaza open at 6:30 p.m.

“What else can you want?” Eaton said.

According to her, it was Riverland’s decision to discontinue the former iteration of the event.

She added that over 300 tickets were already distributed, but she was hoping to draw at least 400.

Valet parking will be available, and according to Schipper there will be a coat-check.

Tickets are $100 a person, and a reserved table of eight is $2,000. Tickets can be purchased at Leutholds or the Albert Lea-Freeborn County Chamber of Commerce. They can also be purchased online at eventbrite.com (search “Autumn Elegance: A Ball in the Mall”) or at the door.

“We’d prefer you not (buy tickets at the door) so we make sure we have a chair for everybody,” Eaton said.

Anyone is invited, and there is no age limit (though minors will be carded).

“It’s a great night for a great cause at a good cost,” she said.