Be our guest with ‘Beauty and the Beast Jr.’ at USC 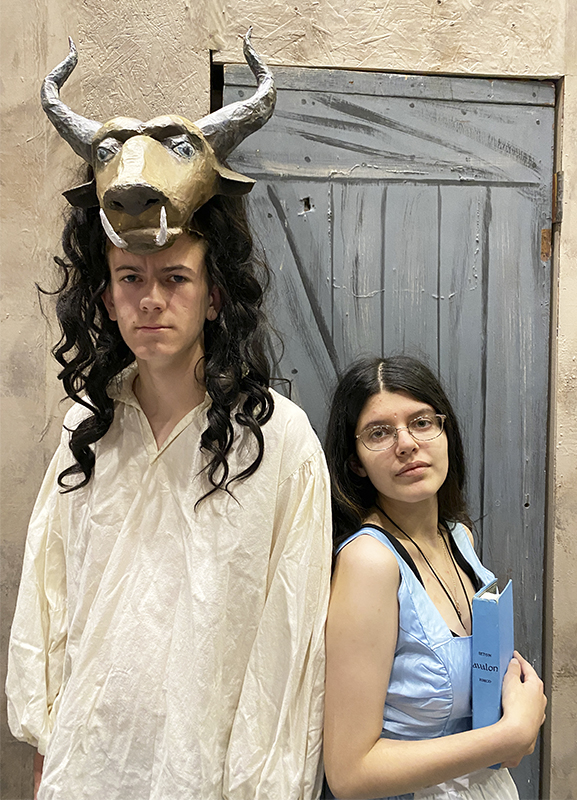 The 75-minute musical, designed for young performers, is based on the 1994 Broadway production and Disney’s 1991 animated feature film. Nearly 40 students are involved, led by director Kirstyn Wegner.

“I’m thrilled to bring this show back to the USC stage,” Wegner said. “‘Beauty and the Beast’ was my favorite Disney movie as a child, and my dad (Clay Miller) directed the show at USC in 2007. My brother (Joey Miller) played the Beast. ‘Beauty and the Beast’ is playing at The Ordway at the end of this year, and USC drama alum Brett Pederson, who played Chip in USC’s 2007 production, is in the chorus.

“Both Brett and Joey are now working professional actors, and both have been in prior Ordway productions. It’s gratifying to see their success and to know that we are building upon that proud tradition. This show has not been easy, but my students are up to the challenge.”

Senior Liz Stern agreed that the show could be challenging.

“I feel like this show is a very difficult one to pull off, but everyone in the show has handled it very well,” she said. “Practice doesn’t make perfect, but it does make excellent.”

“Thanks to Mrs. Wegner’s awesome directing and our amazing cast and crew, our show definitely brings the same magic as the Disney movie,” sophomore Liam Schrader said.

“I feel absolutely ecstatic to have been cast as Belle,” said senior Aislynn Schlosser. “Never in my life did I think that I would be cast in a princess-type role, especially being a natural low alto, but here we are. This role is one of the hardest that I have ever done, but I am so proud to be able to bring Belle to life on the USC stage.”

“Beauty and the Beast Jr.” tells the story of Belle (Schlosser), an adventurous young girl, and the Beast (Schrader), her hideous captor, who is actually a young prince trapped under a spell. To break the spell, the Beast must learn to love another and earn her love in return — before time runs out. With the help of the castle’s enchanted staff, including Mrs. Potts (a loving teapot played by Stern), Lumiere (a charming candelabra played by sophomore Josh Brooks) and Cogsworth (a nervous mantel clock played by freshman Ezra Edwards), Belle and the Beast find a beautiful friendship and love that neither knew was possible.

“The costumes are really spectacular and are a product of my father’s ingenuity and creativity,” Wegner said. “We are using many of the same costumes he created for his 2007 production.”

“Beauty and the Beast Jr.” features classic songs from the Academy Award-winning film score such as “Be Our Guest” and “Belle,” as well as original songs from the 1994 Tony-nominated Broadway musical.

For information on purchasing reserved tickets, call the USC High School Activities Office from 8 a.m. to 4 p.m. Monday through Friday) for reserved seating ticket sales at 507-553-5823. Tickets are also available at the door.

Disney’s “Beauty and the Beast Jr.” is presented through special arrangement with, and all material provided by, Music Theatre International.