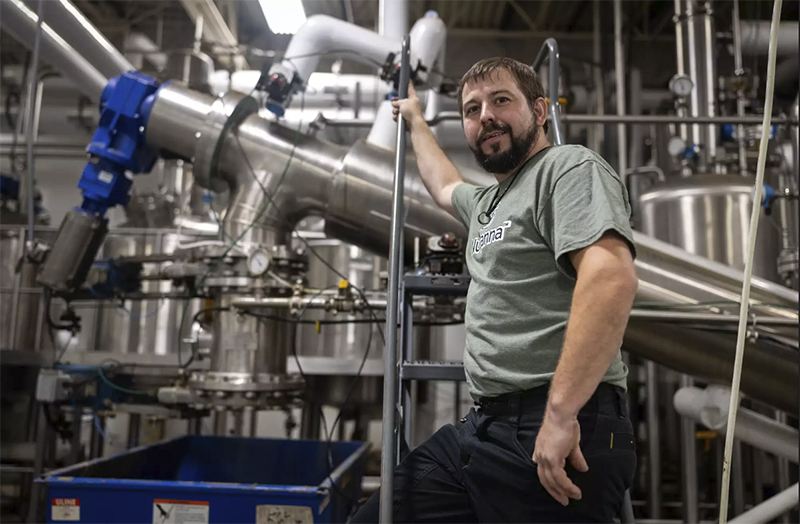 When a state law legalizing the sale of some THC products in Minnesota went into effect July 1, many Minnesotans were surprised. Some were delighted.

However, critics say there isn’t enough regulation in the law. This concern led some cities to require licensing of retailers selling THC products. Some banned them outright. Other communities were fine with the state’s limited regulations. THC businesses now have to navigate a patchwork of local ordinances and regulations.

Rows and rows of hemp-filled bags are stacked to the ceiling in a building at Waseca-based Midwest Extraction Services. All the hemp is grown by Minnesota farmers. Since the state legalized THC product sales just over three months ago, COO and co-owner Matthew Little said he’s seen a surge in demand for his products, which range from THC-infused waters to gummies.

“Let’s say you like cotton candy flavor. In three days, I could have cotton candy gummies on the shelves,” Little said. “That’s how fast we can move here. We can do about a million and a half gummies a month.”

Under the new law, Minnesotans can buy edibles of 5 milligrams per serving, with a limit of 50 milligrams per package. No one under the age of 21 can purchase them. The law is considered the biggest step the state has taken so far toward recreational marijuana legalization. But, the state has relatively few enforcement and licensing powers under the measure, leaving cities to pick up the slack.

However, Little knows that things can change overnight on a local level as cities like Waseca approve ordinances or moratoriums. Changes that could cost him thousands of dollars. Recently, Waseca narrowly passed a moratorium that grandfathers in existing THC stores, but bans new businesses from coming into town.

“Cities can control their sandbox,” he said. “You can control what toys you put in that sandbox and it only ultimately hurts small towns.”

THC retailers trying to set up new stores can suddenly find themselves dealing with new ordinances. Little has heard from at least two businesses in nearby cities struggling to open. He said that the local laws can be very restrictive.

“It’s the difference between me telling them, ‘Hey, hang on this is gonna be a rough patch for you till you get it figured out’ and maybe don’t even do it till the city pulls that moratorium,” he said. “It’s really tough to be just in the CBD space right now.”

General Manager Andrea Fregoso keeps herself updated on any possible rule changes that might come from the state or in the city.

“You never know, nowadays in some cases, we could take a few steps back and kind of have to start all over again,” Fregoso said. “We definitely have been able to keep our eyes open and try to stay ahead of the game.”

Similarly, towns and cities are trying to keep one step ahead.

The general counsel of the League of Minnesota Cities, Patricia Beety, said its members are working through the framework of the new law to work out what it means for local authority, local controls, zoning, licensing and enforcement.

“There is not a one-size fits all model that every community is going to agree with,” Beety said. “It’s going to be an individual decision by policymakers and individual cities.”

Nearby cities including Mankato and Austin passed ordinances after struggling to figure out how best to regulate sales and licensing of THC products. But local officials, including Mankato City Manager Susan Arntz, said they need state guidance on several THC issues.

Among the most important is guidance for law enforcement when finding minors in possession of edibles. State Rep. Heather Edelson, DFL-Edina, was the House author of the legislation. She said THC products were being sold before July, and the legislation meant to address an existing problem of regulation, sales and enforcement.

“So, it was either address this issue last legislative session or not address it [and] let that issue continue. So, either way, we would have had a problem. I want to make that very clear. Like either way, you slice or dice it, there was the issue.”