Chamber names Businesses of the Year in annual ceremony 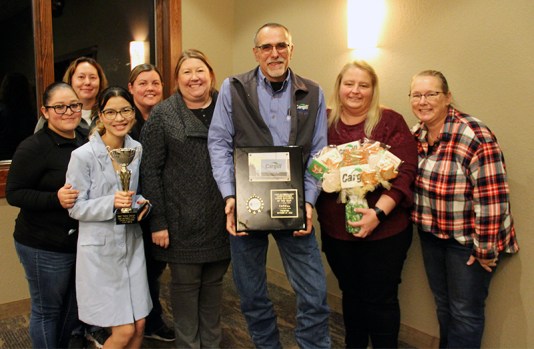 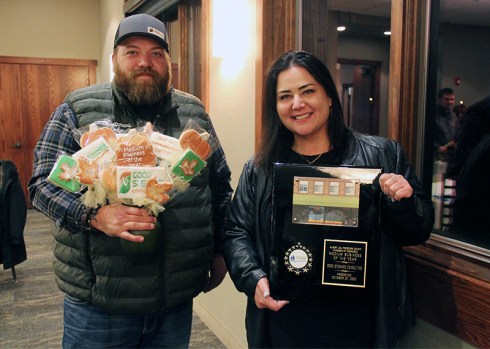 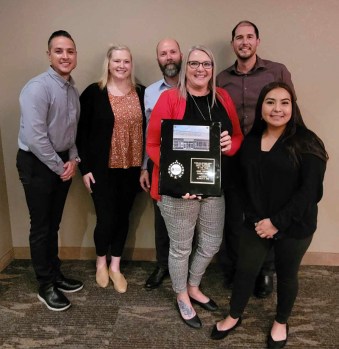 Home Federal was named Small Business of the Year. Provided

Home Federal Savings Bank’s Albert Lea Branch was established in 1990 on the corner of North Washington Avenue and East Clark Street. They provide full-service banking as well as an ATM and night-time deposits. The bank itself was founded in Spring Valley in 1934 and is now headquartered in Rochester with 14 branches and two loan production offices in Minnesota, Wisconsin and Iowa.

“They’re active in the community and they have an employee who proudly serves as the chairman of the Chamber Ambassadors,” said Chamber Executive Director Shari Sprague.

Good Steward Consulting — at 122 W. Main St. — provides marketing, public relations, curation and management and event planning services. According to their website, the company has helped install over 10 gigawatts of energy and are passionate about renewable energy and other rural developments.

“They’ve had so much success and so much growth,” Sprague said.

Cargill Foods — headquartered in Wayzata — has been around for over 150 years. According to their website, they work with farmers to increase regenerative agriculture while reducing their impact on the environment. To do that, they’re creating items such as feed that reduce methane emissions and waste-based renewable fuels.

It was the first year the event was held in-person after being conducted virtually since the start of the pandemic.

“We want to thank you guys for everything that you’ve done in the years that you’ve served on the chamber,” said Beau Hartman, retiring Chamber Board chairman.

Gary Schindler is the new 1st chair of the Chamber Foundation, while his co-chair will be Noelle Hagen from Albert Lea Economic Development.

Kim Nelson, Kathy Woodside and Catherine Buboltz will be leaving, and Cathy Malakowsky will be joining the foundation board.

Sandy Jensen was named Ambassador of the Year for a second straight year.

“This is the first time this has ever happened in the history of the Ambassadors,” Chamber Executive Director Shari Sprague said. “The ambassadors set their own guidelines or bylaws …  and so they decided how to choose Ambassador of the Year.”

The award was based on whoever attended the most chamber activities.

Sarah Stultz was selected Volunteer of the Year for her work with the all-inclusive playground.

Stultz participates in Noon Kiwanis, serves on the Salvation Army board and is active on her church council. She also played a key role in the splash pad.

“She does so much for the community and is always busy recognizing other people, so we really wanted to recognize her,” Sprague said. “The board was unanimous in this decision.”

Following the award ceremony, Doug Loon spoke to chamber members. Loon is the current president and CEO of the Minnesota Chamber of Commerce, which represents over 2,300 companies, over 130 local chambers of commerce and 65 business trade associations.

Loon started by talking about a book he was reading, “The Magicians of Main Street,” by Christopher John Mead. The book covered the history of chambers of commerce from 1768 to 1945. In fact, chambers preceded the founding of the country.

“Always about the community, no matter how you define it,” he said.

Loon argued chambers were essential for creating “a strong fabric” in the community and said other organizations such as churches, Lions Clubs, Rotary and Kiwanis helped to strengthen that fabric.

“By coming together to solve problems, chambers are particularly important,” he said.

He also said chambers created economic opportunities for people and wanted to “get people together” to help business and problem-solve.

He stressed companies built within the state were built off their workforce and innovation, coming up with new products to market and doing so in community, statewide, national and global levels.

But there was bad news, as the state struggled with new business applications, though he noted there was a spike in applications during the pandemic. Minnesota also struggled to attract businesses from other states, in part because the state wasn’t attracting young talent as fast as it used to. In fact, the only state Minnesota was drawing talented workers from on a net positive basis was Wisconsin.

Factors of concern for him were the labor force, a trailing technology growth and a slow productivity growth.

Minnesota also has one of the lowest unemployment rates in the country, which to him meant there wasn’t any ability for employment growth.

“We have roughly 200,000 job openings in Minnesota, and yet we have — at last count — almost 66,000 Minnesotans have not come back to work post-pandemic compared to pre-pandemic levels of employment,” he said. “We’re at full employment, but yet we have folks who are sitting on the sidelines of the economy that were working a couple of years ago. And I don’t think there’s an explanation for this.”

According to Loon, population and economic growth went hand-in-hand.

Tax reform was one way to attract businesses. Minnesota has the second-highest corporate tax rate in the country. He also suggested tax reforms in both corporate and individual rates.

He also wants to look at environmental and regulatory processes. Loon admitted he was pro-mining, but he wanted companies to do so in an “environmentally-sensitive way.”

Talon Mining just completed a deal with Elon Musk to produce batteries for Tesla in 2026. To do so, they want to mine nickel from the state’s underground mines and will process nickel in neighboring North Dakota.

“It’s a $600 million project, with $114 million coming from the federal government and a grant to help them do it,” he said.

The new processing center will have 150 employees.

He said regulatory uncertainty in the state made processing nickel unimaginable in five years.

“We have an unpredictable, not very transparent system that has a very high standard — we’re not suggesting we want to lower our standards, our clean water, our clean air is really critical to us — but we have a system where if you’re a business and you’re saying, ‘I need to get an air permit or I need to get a water permit,’ you don’t know how long it’s going to take,” he said.

Lack of available housing and child care was also an issue.

Loon closed by talking about structural tax reform and argued if Minnesota continued exporting people to other states the state lost not only talent but assets.

He urged people to visit their legislators and encouraged them to invite them to their businesses.

The Minnesota Chamber of Commerce has been around for over 100 years, and their goal was to ensure growth in the state. Roughly 40% of the chamber’s membership comes from businesses outside the Twin Cities metro.

The goal of the chamber was “to keep bad things from happening” and to make the state’s business climate as good as possible.

According to Loon, in the last legislative session the Minnesota Chamber of Commerce stopped a mandate on what businesses had to offer in an employee benefit package.

“The state was saying, ‘Oh, we’re going to require you to do a sick and safety mandate or a paid-leave mandate,’” he said. “All these things cost money, it constrains your ability to design a benefits package around what you see your businesses’ interests to be cause if you want to attract and retain talent you got to pay well in terms of salaries and benefits.

“And here’s the state saying, ‘Well, you’ve got to structure your benefit package this way.’ Takes the flexibility away from you that meets the needs of your employees.”

Prior to his current role, Loon spent 20 years with the U.S. Chamber of Commerce.

The presentation ended with the passing of the gavel from Beau Hartman to Allen Hendricks. Hendricks is the incoming chamber board chairman.

“Communities, it’s one of the biggest assets that we have in Albert Lea,” Hendricks said. “My ask of you is to maintain that going forward and we continue to help that grow.”