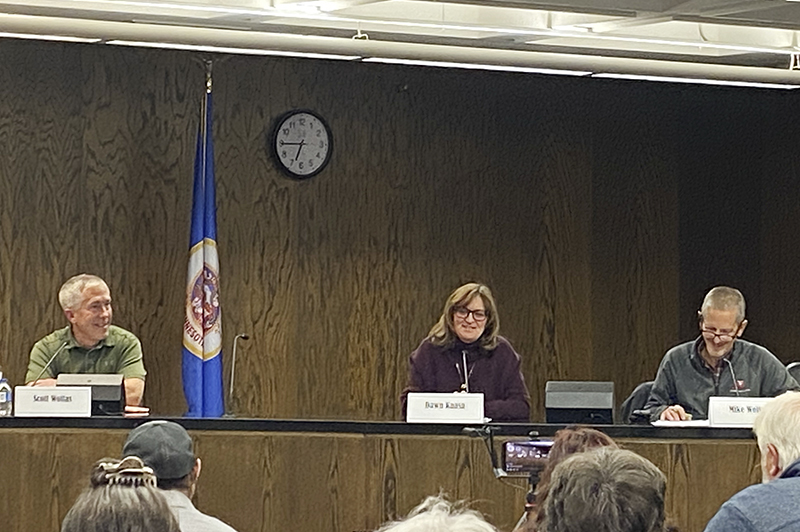 Freeborn County commissioner candidates took on questions about taxes and vision for the county Monday in a candidate forum in front of a full house crowd in the Albert Lea City Council Chambers.

The forum was the first of three slated by the Albert Lea-Freeborn County Chamber of Commerce for local candidates with moderator Mike Woitas of KATE Radio.

Incumbent 1st District Commissioner Brad Edwin and his opponent, Julie Ackland, were the first to take part in the forum Monday night.

In her opening statement, Ackland talked about her educational background and experience, which includes several degrees in topics such as urban studies, counseling, economic development and nonprofit management.

She started her work with the Austin Housing Authority in 1979, managing 56 units of Section 8 housing. She has also worked for what is now known as Crest Services, where she received an ombudsman award for her advocacy and said she has spent time writing administrative policy and helping others develop policy.

Presently, she is a family housing specialist for the Austin Housing and Redevelopment Authority.

Edwin, who was first elected two years ago, said he has lived in Albert Lea and Freeborn County his entire life and believes it is important to give back to the community you’re a part of. His background is in business administration and has also served on the Manchester Fire Department and Salvation Army Advisory Board.

“I know what it takes to work within a budget, control that budget,” Edwin said.

He said he uses a roll-up-your-sleeves approach and likes to ask questions and gain as much knowledge as possible.

“As an elected commissioner, we represent and work for you,” he said.

When asked if there was an issue or policy they would like the county to adopt, Edwin said he would like more involvement from the board, particularly in cases of hiring department heads. He said currently two commissioners are able to be part of the process of that hiring process. He referenced the importance of department heads.

Ackland said she thinks the county should help people buy solar panels. She said she has solar panels on her own property that cover all of her electricity, and in the summer she actually gets a check for extra electricity they generate.

Edwin said he would like to see a strategic plan developed at the county level on how to promote the county, bring in more business and make it a better place to live.

When asked what the most important issue was for their district besides taxes, Edwin said he thinks the biggest challenge will be the budget because of inflation.

Ackland said she thought it was the environment.

Regarding the search for a new county commissioner, Edwin said he is excited about the process and how it gives the county the opportunity to build and strengthen its team.

“I believe putting the right person in place is going to help us grow our community,” he said, noting he wanted to see an administrator hired who gets out on a daily basis amongst the employees.

Ackland said she was bothered by the amount the county paid the consultant to find a new administrator.

All of the candidates for all of the open commissioner races were asked what they would do to get the west doors of the courthouse reopened to the public.

With District 2 candidates, Scott Woitas and Dawn Kaasa answered questions. In that district incumbent Commissioner Dan Belshan announced he is retiring at the end of the year.

Woitas said his main priorities are to be transparent and to have fair spending of taxpayer funds. He said his 32 years in government work have prepared him for the position.

He works as the county IT director and has farmed for over 40 years.

Kaasa asked those who voted for the other candidates in her district in the primary to consider voting for her in the general election. She spoke about her background, including as a mother and grandmother, in farming, with their trucking business and currently as program administrator for Special Olympics Minnesota. She said her time on numerous boards would benefit her in the position.

Woitas and Kaasa were asked if there were ways the city and county could work more closely together.

Kaasa said she thought the county and city were having meetings but thought there could be ways they could work together.

Woitas spoke of his experience joining city and county IT together, which he said eliminated a lot of overhead and waste. He also pointed out the sharing already in place through the Albert Lea Police Department and Freeborn County Sheriff’s Office.

The candidates were also asked how the county could retain more of its employees.

Woitas said the current administration is doing good on that and wages are up so they are competitive. He said they are promoting a safe work envieonment and filling positions at what he described as a “record pace.”

Kaasa talked about the importance of making the work environment friendly for employees, being open to employee suggestions.

Regarding the current shortage in law enforcement, she said maybe the county should look closer at what others are paying.

When asked about getting the west doors back open to the public, Kaasa said she knows it is something everyone wants and would look to law enforcement for recommendations. She said it might require more staff to do so.

Woitas said he has also heard several people talk to him about the doors reopening. He said while he thinks there is a safe community, courts definitely need safety and could have the metal detectors moved up to that level.

He said there was a good opportunity to reopen the doors, depending on the sheriff and the rest of the board.

Woitas said he thought getting the Sheriff’s Office fully staffed again was one of the largest issues that needed to be addressed., in addition to keeping roads maintained, despite a possible 7% to 11% cut in state aid next year.

Kaasa said getting the Sheriff’s Office fully staffed was a big priority, and she also talked about the importance of roads, particularly for the rural communities. She said the county had the 13th most miles in the state and was 35th largest in size in the state.

Woitas said the main role of a county commissioner is to listen to constituents, see what their concerns are, make sure they are aware of where the budgets are and to talk to departments, communicate and help the board work in unison.

Kaasa said board members need to listen to the voters and share the information they learn from the voters with the other board members. They also need to collaborate for solutions and make decisions based on facts. She noted that communication with voters in the district is key.

Woitas said he, too, would like to see the expansion of small business, as well as keeping the large businesses already in the community.

He said he would like to see more people coming to the community for the bike trails and parks, which will in turn bring in more revenue to the county.

Herman, who said he has lived in Freeborn County his whole life except for during his military service, spoke about his law enforcement background and how he thinks he has been able to start a lot of great things in his time on the board. He is running again after only two years because of redistricting.

He said he truly loves the community and that’s why he believes in being involved.

When asked about reopening the west doors of the courthouse, Herman said it boils down to whether it’s more important for people to go in any door they want to or to have the security there.

Eckstrom said while she wants the county employees to be safe, she also recognizes the importance of government to be friendly and accessible to constituents. She said many have brought up how difficult it is to access services.

When asked about the most important issue for their district, Eckstrom said she has heard often about the lack of law enforcement in the rural area, about keeping taxes down and also about wind turbines, balancing economic growth and maintaining the rural lifestyle they love.

Herman said there are many issues in the district, including workforce, housing, child care and roads.

“And all of that goes back to the budget,” he said.

Regarding how to retain more county employees, Herman said he thought county administration had done a good job of keeping employees in the last few years.

Right now, the county is losing a lot of jail staff, but noted how tough the job is  because of hours, working nights and holidays and because it can be dangerous.

“It’s not just a Freeborn County issue,” he said. “This is a nationwide issue.”

Eckstrom said she thought they needed to compare Freeborn County to surrounding counties and make sure salaries and benefits are competitive. Once they get good employees, if they have a concern, it is important to have an administrator they can trust so there is not a mass exodus of a good department like she believed had been done earlier in the year.

She also stressed the importance of emphasizing how wonderful it is to live in Freeborn County.

Eckstrom in her closing remarks said she would take the position very seriously and always be prepared. She noted she did not have a problem with tabling a vote if necessary.

Herman said he has a mindset to be respectful and collaborative and has made himself available 24 hours a day to constituents. He talked about some of his successes, including the return of the driver’s exam center to Freeborn County, reinstating the shared services committee with the city and gaining the county a vote on the Greater Jobs Board.