DFL candidates talk to seniors in Albert Lea about their concerns 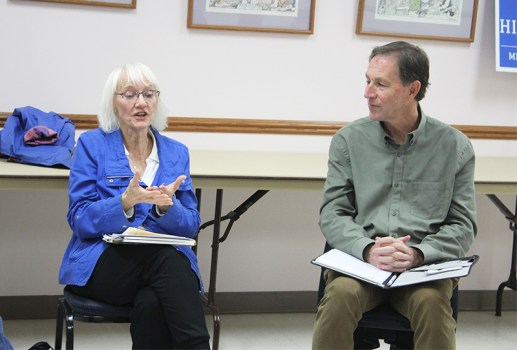 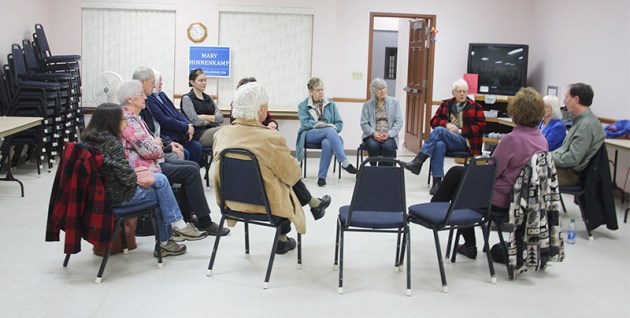 Seniors in the area shared their concerns during a roundtable discussion Wednesday with DFL candidates Mary Hinnenkamp and Jeff Ettinger at the Albert Lea Senior Center.

Hinnenkamp is running for Minnesota House District 23A, and Ettinger is vying for the 1st District House of Representatives seat.

“I really came here to learn,” Hinnenkamp said at the start of the roundtable. “I think this community has certainly lots of seniors.”

In his opening remarks, Ettinger admitted something he heard a lot about was the vote on the Inflation Reduction Act, something he noted Brad Finstad — the current House representative elected to serve the rest of the late Jim Hagedorn’s term — voted against. He also felt Finstad voted against it as a way to blame the Biden administration on inflation.

“We finally have a chance for Medicare to negotiate prescription drug costs,” he said. “We have a cap for seniors’ cost on insulin, we have a cap for seniors’ costs on prescription drugs, and we have the renewal of the Affordable Care Act subsidies that were about to expire. And they were renewed for three-plus years. Historic climate provisions, and so to me it was really a ‘vote smart bill’ that was focused on the right things paid for by, to me, proper tax things like creating a 50% minimum tax on all corporations over $1 billion. It was not small businesses at all.”

He then told the audience he heard Republicans would look at Social Security and Medicare costs should they take control of the House. And he felt that was a problem because it showed Finstad was voting “in lock-step” with the Republican Party. He also accused him of dodging debate events within the district.

He also touched on the job market and described the economy as “mixed,” and said the impediment shouldn’t be cost.

“If somebody is talented and interested and motivated to become a nurse or go into one of those areas then we ought to have a better system in place to encourage that,” he said.

Hinnenkamp said it used to be that any proposed increase would go before city council where there would be a vote. One attendee noted they did not receive any notice about it.

“We’ve seen somewhat of a rollercoaster on gasoline prices,” Ettinger said. “Super up earlier this summer, then they were starting to come down. But now with this latest Saudi — Russia collusion thing it looks like OK, now they’re going to jack them up again.

“But heating costs, all they’re saying is that it’s going to be up.”

He also touched on the importance of filling jobs, and said if there were migrants who wanted to work they should be allowed to.

“Immigration issue is so mixed,” he said. [Some people] are here on refugee status, so in some cases they’re not the same as folks who come across the border.

“But ultimately, once you’re here if you’re willing to work and able to work, we should figure out a system that would allow us to tap into that.”

Guns and gun safety was a concern, with one person sayings children weren’t safe in school.

Hinnenkamp talked about having reliable broadband internet, something farmers were struggling with.

“If you’re a small town … and you want to attract people to your town and say, “Hey, this is a nice place to live,’ but if they can’t live there and work from home, they’re not going to move there,” she said.

Ettinger said broadband and connectivity was a basic necessity.

Another person discussed the desire for seniors to stay in their homes, and said Albert Lea needed health care givers who could care for people during the day and then have the ability to return home at night. She proposed offering home caregivers tax credit.

Ettinger asked the crowd what transportation challenges were like for seniors. One person told him Human Services needed to give those without transportation a bus pass. Currently the city offers bus transportation, and Senior Resources drivers will also take people to appointments outside of Albert Lea.

“They’re clearly intimidating people to scare them off from voting,” he said. “So I’m hoping people here and everywhere are voting early.”

He encouraged everyone at the meeting to vote as soon as possible at the courthouse.

Ettinger said there were people who believed mad conspiracies and argued some wouldn’t believe election results if their preferred candidates lost.

To counter an argument, he pointed to the Republican primary back in August, and pointed to Jeremy Munson’s encouragement of mail-in ballots because of the number of townships in his district.

“I guess the mail system works OK sometimes, but it’s a real risk in other times I guess,” he said. “I don’t know, it just seems kind of funny that that’s an issue.”

Another person said she found it interesting some Republicans were pro-life and pro-Christianity but wouldn’t consider any form of gun control, particularly of military-style assault rifles.

“When Republicans were in control (in Minnesota), they were the ones who cut back on supports for women,” Hinnenkamp said. “If you really want to be pro-life, then you make sure that women who have children have all the supports that they need. whether it’s school support or day care or any of the issues that would make you think, ‘I can’t have another child because I just can’t manage.’”

Ettinger said when the abortion question of pro-life or pro-choice was polled in southern Minnesota, results were divided evenly.

“But when you get past the simplicity of those labels and say, “OK, did you want Roe to be overruled, do you want women to be made into criminals, or their doctors? Do you believe that the government should be the ones making the decisions in the first instance, in most cases it quickly becomes two-thirds to one-thirds ‘no.’ That is southern Minnesota’s position,” he said.

Hinnenkamp said at the state level she heard people were backtracking on what they previously said.

“It’s nobody’s business,” Mammel said. “Why should I be concerned about what a woman does between herself, her own conscience and her doctor?”

He said while he didn’t like the idea, he felt it was important for people to have the freedom to choose whether to do so.

“What could be more fundamental than the control of your own body?” Hinnenkamp asked.