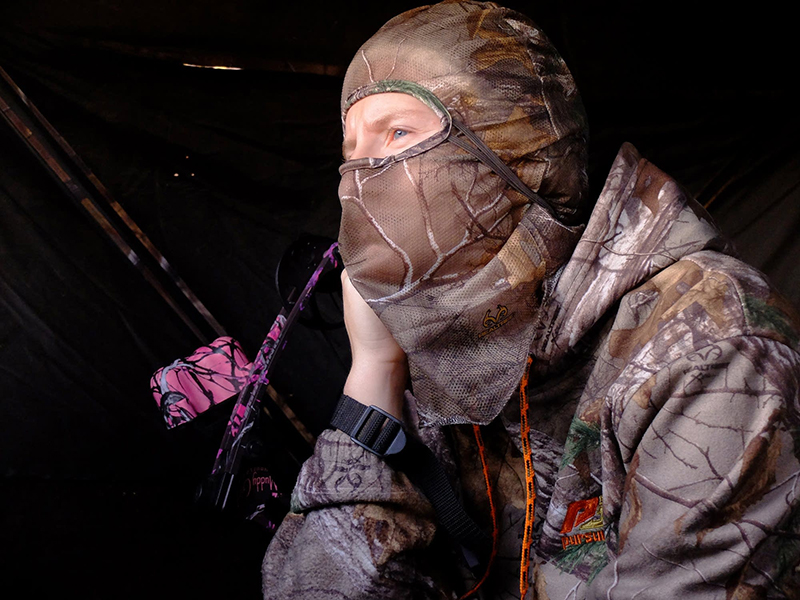 Misty Stoll scans the area for movement as she waits for a deer to pass her blind on Oct. 20 in rural Clay County. Dan Gunderson/MPR News 2017

The Minnesota Department of Natural Resources believes what hunters see as they wait can be valuable data to help manage the deer population.

“Using citizen science, working with our deer hunters, allows us a much further reach than we would have otherwise. Obviously, we can’t be in the field across the state all the time, so tapping into this resource with our hunters allows us to obtain so much more data from a much larger spread across the state,” he said. “It’s something that we’re trying to figure out how to really capitalize on.”

The problem for the DNR is that hunters are not taking the bait.

Last year just 49 hunters out of more than 400,000 who bought a hunting license volunteered to fill out observational surveys about animals they saw in the field.

The agency is trying to make it easier. The survey started out targeting only bow hunters, who tend to spend more time in the woods than those who hunt with firearms. Now any deer hunter in Minnesota can participate. And Michel said the survey is easily accessible on a smart phone.

The survey asks hunters to log the hours they spend in the woods and the deer they see during that time, their sex and whether they are adults or fawns. If enough hunters participate, the data can help the DNR validate population trends over time.

“And it will also ask you for some other observations,” said Michel. “Information about wild turkeys, black bears, coyotes, bobcats, gray wolves, fishers, grey fox and badgers. And we’re collecting that information to help us get a better understanding of the distribution of those species across the state.”

Iowa has one of the longest running hunter data collection projects in the country, and reports consistent participation year after year.

Those responding hunters log, on average, between 70,000 and 90,000 observation hours in the woods each year. “Which is just a massive amount of data that we can use to then inform population trends,” said Harms.

“If we were to have our staff complete this survey, we estimate it would cost about $2.5 million per year to get that much observation time in the field,” he said. “And currently the survey costs us about $15,000 to implement.”

This is the 17th year for the Iowa hunter survey. It was started to get more information about secretive often unseen species like bobcats and badgers.

But it also provides important validation about deer populations across the state.

It also turns up the occasional surprise, like when a hunter reported a mountain lion walking under his tree stand a couple of years ago.

And Harms finds many hunters are eager to participate.

“A lot of hunters when I’ve chatted with them about this survey, their response is, “well, I collect this information anyway, so I might just as well give it to you,’” he said.

Minnesota hopes to copy that success by reaching out to more hunters via email and social media, encouraging them to become citizen scientists for a few days each year.