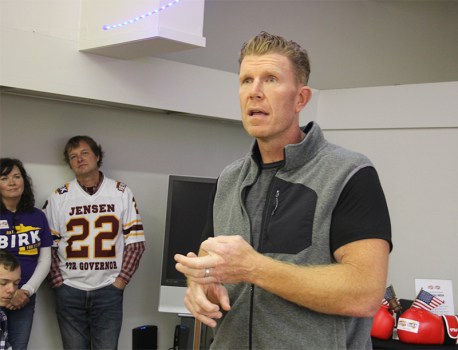 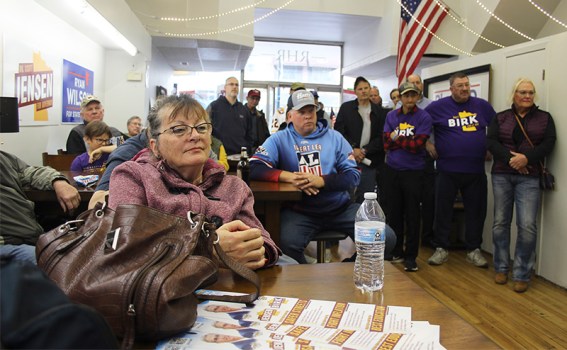 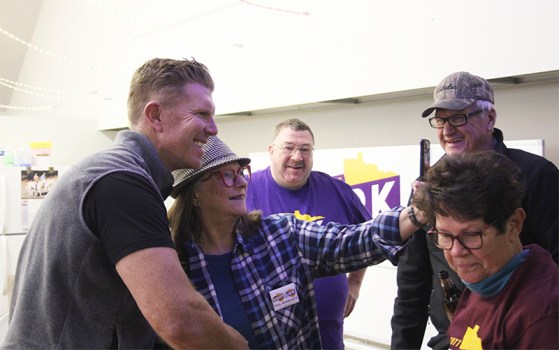 Birk is running for the seat alongside Scott Jensen, Republican candidate for governor.

Birk’s goal if he and Jensen win: show what good government looked like and represent all people.

But, he said if they were elected the two would “do the right things, the right way, for the right reasons.”

He also wanted to stop young people from leaving the state.

“The state’s not in a state that I think all of us say is good enough,” he said. “It can be better. I believe in Minnesota exceptionalism, if you will. I believe that there’s something about us as people, our values, our respect, the character — it does make us different.”

Birk felt as an elected official it would be his duty to represent people and not a political party.

He started out his speech by telling the audience what his day was like: after a morning appointment he toured an agriculture company where he learned Minnesota was “one of the agriculture technology leaders in the world,” visited a hog farm and ended his day in Albert Lea.

“It’s absolutely fantastic,” he said. “This has been an unbelievable experience.”

And he said he wasn’t even tired.

He then told the audience why they were all gathered.

“At some level the last few years we saw bad government,” he said. “We saw what government looks like at its worst when it overreaches its bounds and goes too far into people’s lives.”

He said those effects were seen in inflation, test scoring and crime. Importantly for him, government wasn’t doing what it was supposed to.

And that was his message — that he and Jensen could show people what good government looked like.

“Good government can be a partner, a collaborator, in business for farming, or mining or whatever it is,” he said. “Government can enable families to choose the best schools for their kids.

“Government, a basic function, a basic responsibility of the government is to keep its citizens safe.

“And ultimately not over-tax it’s citizens.”

Birk and Jensen met on an airplane and Birk described him as not the typical Republican and someone who didn’t aspire to be a professional politician.

So he started attending events for Jensen, and that — for Birk — was when the movement started feeling real.

“I saw the grassroots movement taking place, and this was 1 1/2 years ago where 100 or 200 people would be there and I’d ask them, ‘Raise your hand if you’ve never been to anything like this before,’” he said. “And 80 or 90% of the people would raise their hands.”

He also shared a piece of advice he learned from former coach John Harbaugh.

According to Birk, Harbaugh would tell the team it was a nameless, faceless opponent, meaning it wasn’t about the opponent but rather about the team.

On election fraud, Birk noted how many people were running for positions who had previously never been involved in politics.

He also talked about the importance of getting support from moms, minorities and millennials.

On education, he felt it was important to remove politics from classrooms.

“It’s about reading, writing and arithmetic, those types of things,” he said.

And he felt education funding was not meant to support an institution, rather to educate people.

“Seems like the public school system spending keeps going up and up, results keep getting worse and worse, seems like there’s a lot more that less and less of the money is actually getting to the classroom, to the teachers and to the students,” he said.

In terms of gun regulations, he is in favor of conceal-and-carry, stand-your-ground and castle doctrine.