Herman hopes to continue service to the community as a commissioner

Fifth District Commissioner Ted Herman is hoping to continue his life of public service with another term on the board. 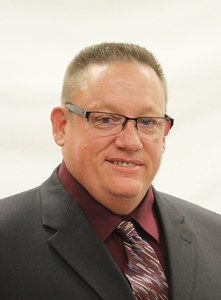 First elected to the Freeborn County Board of Commissioners in 2020, Herman is seeking reelection after his term was cut short due to redistricting following the census. He will face off in November against Nicole Eckstrom of rural Albert Lea.

“I’ve started a lot of good things, and I want to continue and finish them up,” Herman said.

Herman, who graduated from Albert Lea High School in 1983, has lived in Albert Lea all of his life except for the time he spent in the Marine Corps when he served in special security forces and as an infantryman.

He and his wife, Laurie, have two adult children and three grandchildren.

Combined with his Marine Corps service, he has 33 years of public service to his country and for local citizens.

“I truly love this community, and that’s why I’ve been in public service for 33 years because I think if you’re not helping you’re part of the problem,” he said.

With his time on the board thus far, he said he is proud of the work he was able to do to bring the state driver exam center back to Albert Lea. He said he worked with state Sen. Gene Dornink on the issue and testified two times in front of a Senate committee about the importance of it to the community.

He is glad the board has been able to keep the levy down, and he is also glad to see the county and city of Albert Lea resume its shared services committee. The committee, he said, had not met for several years, but he encouraged former Administrator Tom Jensen to bring the meetings back. The committee met for the first time again last week. Two city councilors and two commissioners, including Herman, attend.

“We got a lot of things on the table, and we think we can share some services and make some headway on some other projects,” he said. “It was nice to see everyone’s collaboration.

He also pushed to make the county member of the Greater Jobs board a voting member and is proud that the board voted to accept it.

“If you’re going to be giving away money to an organization, you should be able to vote on where that money’s going,” Herman said. “One of my big things is economic development for Freeborn County and Albert Lea because if Albert Lea’s growing, Freeborn County’s going to grow.”

He said being a police officer for 28 years, he is able to think quickly on his feet and think about what’s the best way to resolve an issue so all parties can reach an agreement. To be able to communicate that for all people to understand is a huge life skill, he said.

He also described himself as a good listener and said he responds immediately when people come to him with questions. And if he can’t find out the answer himself, he’ll find someone who can.

This year he was approved by his fellow board as vice chairman and said this shows him they believe in him on the board.

“I truly come to do my job every day thinking, ‘What’s the best I can do for Freeborn County?’” he said. “What is the absolute best?”

In many situations, the decisions the board makes involve taxpayer dollars and services, and he said it is important to think about if the service will be ones that a majority of the county will use.

If reelected, he wants to help keep the county financially sound like it is right now and help it continue to provide great services to the county residents.

The county has many big issues before it, including staffing, housing and child care needs and will work with the city on many of the issues. He said the new county administrator is expected to start later this year.

In addition to his work on the board, Herman is a part of the Albert Lea American Legion Riders, which is working diligently to bring a Freedom Rock to the courthouse lawn to honor veterans. He is also a part of Beyond the Yellow Ribbon, an organization that supports deployed soldiers and their families.

He also officiated high school football for 10 years and coached football for several years. He was recognized as the 2008-09 Minnesota Juvenile Officer of the Year and has two life-saving awards.

“I’m really proud of our community,” Herman said, talking about the importance of staying committed to the community. “I think it’s great.”