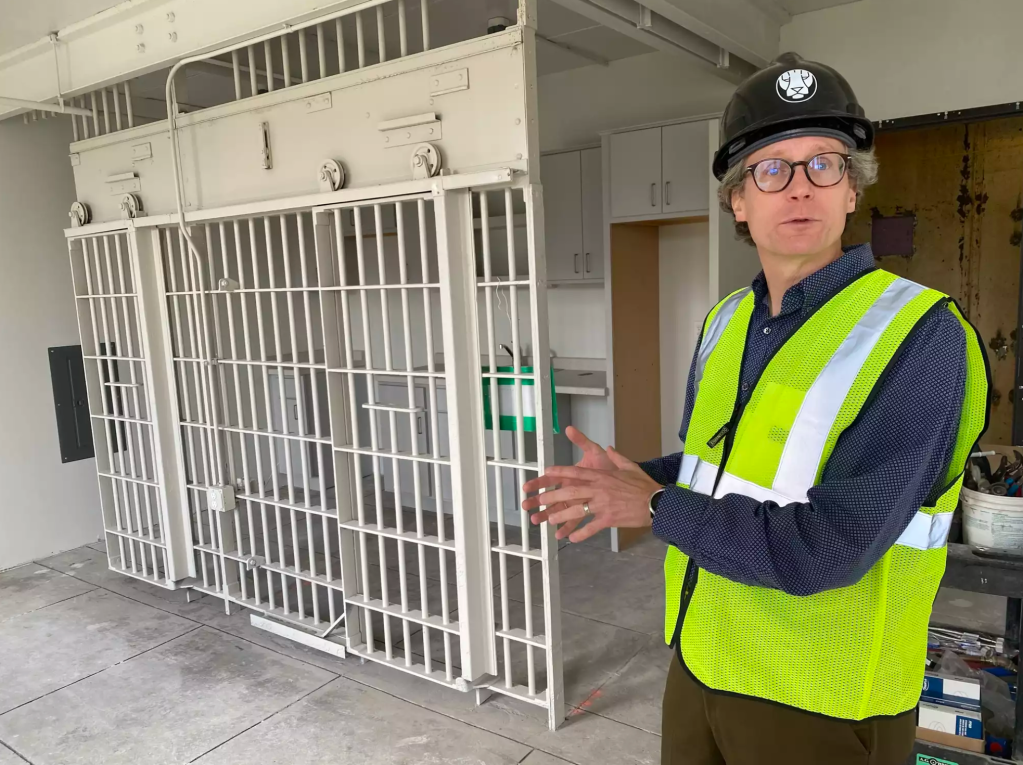 Developer Jon Commers gestures toward a set of bars between the kitchen and living area in a unit in the old historic county jail that’s being repurposed into an apartment building on Oct. 6. Dan Kraker/MPR News

A century ago, the granite facade of one particular building in Duluth was the last place most people wanted to see.

“We are looking at a pretty imposing kind of edifice of the former jail property,” said Jon Commers, as he stood in front of the old St Louis County jail, built in the early 1920s. It’s tucked behind the county and federal courthouses in downtown Duluth.

Commers is one of three developers transforming the building into 33 mixed income apartments that he hopes people will want to call home.

Inside, workers bustle about, painting and putting finishing touches on the building. Commers points out terrazzo flooring in the lobby, detailed plaster work, and decorative designs at the tops of columns.

“The craftsmanship involved is really extraordinary,” he said. “You have decorative elements that, you know, [are] just really striking.”

And other more jail-like elements remain. Inside one of the apartments, Commers points out a row of bars between the kitchen and living area.

“That section will be retained,” he said. “Many of the units will have some remnants of bars, or, as you see, some just mechanical elements of the blocks.”

Commers likens retrofitting the jail — which sat vacant for about 25 years and was nearly torn down for a parking lot — to playing a game of Jenga.

The contractors learned the old cell blocks actually supported the structure. So they had to replace many of them with steel beams. Adding to the challenge was the building’s coat of old lead paint that had to be removed.

All together the project cost a little over $11 million.

About a third of that cost is covered by state and federal historic tax credits. Without those credits, Commers says, the project would not have happened.

“There’s no ambiguity about that. It simply would not be feasible to accomplish without both the state and the federal historic tax credit,” he said. “The kind of demands that a project like this brings forth simply require that kind of capital infusion to make it feasible.”

Just a few blocks away, construction began last month on a nearly $30 million project to restore and convert Duluth’s historic Central High School. Built out of Lake Superior sandstone, with its landmark clock tower, it will contain 122 residential apartments.

But more potential projects like these across the state are in limbo because of the expiration of the state’s Historic Rehabilitation tax credit at the end of June.

A powerful tool for restoration

That credit provides a 20 percent income tax credit to project developers, and parallels a similar federal credit. It’s helped restore more than 170 historic buildings around the state since it was created about a decade ago.

Minnesota is one of more than 30 states that offer their own credits to supplement what’s offered by the federal program.

“Before the state credit was implemented only one or two historic buildings were restored in any given year,” said developer and consultant Meghan Elliott.

In the last year before the project expired, 34 projects were approved, as developers scrambled to take advantage of the program. “They recognize how powerful this tool is for making these projects happen. And we just had a deluge of applications into the state of Minnesota,” Elliott said.

Elliott is another developer on the Duluth jail project and co-founder of the group Revitalize MN. She says the credit recognizes there’s a lot of value in restoring historic buildings that the market doesn’t take into account. Take the jail project in Duluth.

“It was built with 280 tons of steel and granite quarried from Rockville, Minnesota,” Elliott said. “There’s no way you can ever overcome that lost embodied energy and carbon, if you put that building in the landfill.”

In addition to the environmental benefits, and helping to restore city’s historic legacies, advocates say the credit also creates jobs.

“For every dollar spent on a reuse project, you’re spending that money on people in jobs as compared to materials,” Elliott said.

A recent analysis by University of Minnesota extension found the credit generated an estimated $5 billion in economic activity in 10 years.

But it’s also expensive. In the program’s last year, it cost the state nearly $125 million in tax revenue.

Hopes for an extension

“There is a cost anytime that you do a tax credit, and anytime you do a tax cut. That costs cash, and there’s a lot of needs out there,” said Youakim. “And sometimes this one doesn’t always float to the top.”

Still, Youakim said the credit has bipartisan support. It was included in the tax bill legislators negotiated last session. But the deal died in the fight over other spending bills.

GOP State Senator Carla Nelson of Rochester, who chairs the Senate tax committee, said she’s hopeful the legislature will extend the the credit next year and also eliminate its sunset clause. She calls it “a gem” for the state.

If it’s not reinstated in the next legislative session several projects around the state are in jeopardy.

One of them is the planned $90 million conversion of Landmark Tower in downtown St. Paul into 186 apartments.

The project is simply “not viable” without the state historic tax credit, developer Chris Sherman said.

Sherman is president of Sherman Associates, which has used the credit to develop a number of high-profile projects around the state, including the restoration of the historic NorShor Theatre in Duluth.

Sherman said the credit is an especially important tool considering the changes that the pandemic has brought to real estate.

“We have got a lot of buildings that have shifted uses over the last two years as a result of pandemic,” Sherman said.