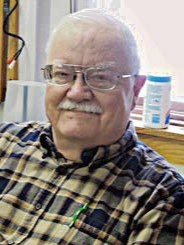 He graduated the 8th grade from District 5, Mille Lacs County in 1952 and from Princeton High School in 1956. He served in the U.S. Army from 1957 – 1960. He was a graduate of the U.S. Army Information School in Fort Slocum, NY, and also served at Fort Carson, CO; U.S. Army Hospital, Nuremberg, Germany; and Fort Jackson, SC. He attended the University of Minnesota and Indiana University Northwest. He was a graduate of the Minnesota School of Business. He began his newspaper career as a reporter with the Albert Lea (MN) Tribune in 1966. He was named city editor in 1969 and editor in 1970, a post he held until 1985. He joined the Times of Northwest Indiana in Hammond, IN, in 1985 as a copy editor and named news editor in 1988. Later that year, he accepted a position as editor of the Daily American of Somerset, PA.

He was active in the Albert Lea Community Theater and in the Chippewa Valley Theater Guild. He was a tutor for Literacy Volunteers Chippewa Valley for 10 years and a volunteer shuttle driver for Hope Gospel Mission from 2004 until 2013. Beginning in 2004, he volunteered at Wisconsin Public Radio where he assisted the hosts in producing the arts and entertainment program Spectrum West.

He married Linda Newhouse Oliver on June 5, 1981, in Rochester, MN. She survives as do two sons, Matthew (Melinda) Oliver and Patrick (Melissa) Oliver; 5 grandchildren and 4 step-grandchildren; nieces, cousins and friends. He was preceded in death by his parents.

In lieu of flowers, donations in his memory may be made to the Plymouth United Church of Christ or a charity of the giver’s choice. If flowers are ordered please avoid lilies.

Friends and family may offer condolences online at www.hulkefamilyfh.com.