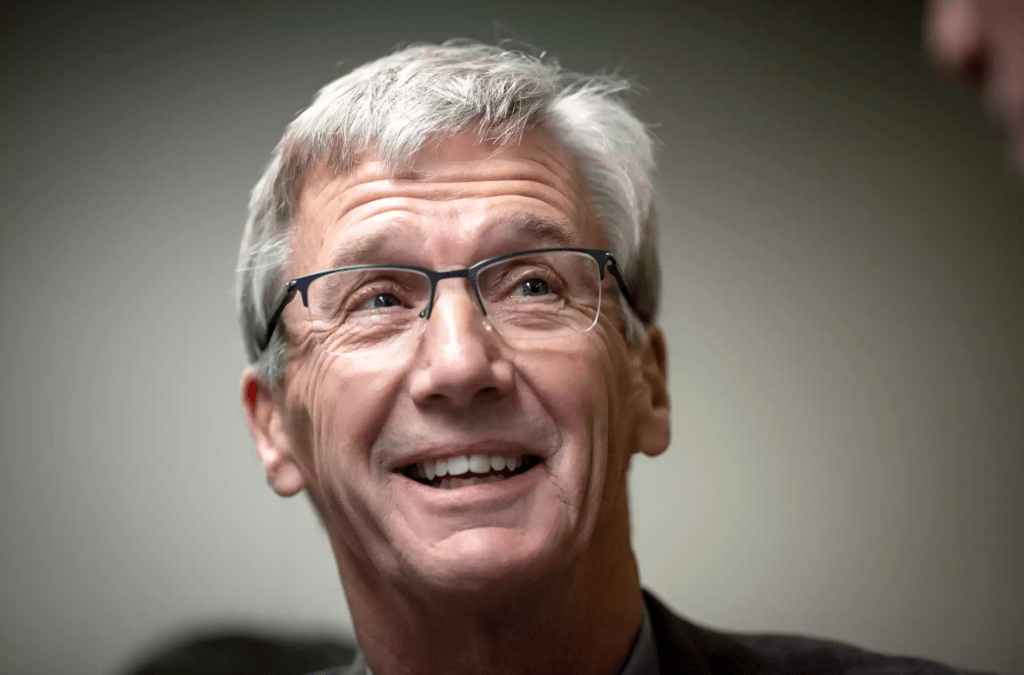 Republican gubernatorial candidate Scott Jensen looks on during a press conference after he filed to run for governor at the Capitol on Monday, May 23. Kerem Yücel/MPR News file

It can take many years and many terms for state lawmakers to make their mark at Minnesota’s Capitol. Some don’t wait around.

Scott Jensen, a Chaska Republican who entered the Minnesota Senate in 2017, found a quicker path to public notice than typical newcomers — partly by chance and partly by expertise.

Jensen was just a few weeks into office when then-DFL Gov. Mark Dayton collapsed during his State of the State address. Jensen was paying close attention to Dayton’s heavy breathing, labored voice and general shakiness. And he was among those quickest to his aid.

“That was partly why I responded. He hit his head, then he fainted,” Jensen told reporters of Dayton’s prime-time brush with dehydration. “Now he’s stable.”

A doctor in the Senate

The Legislature hadn’t had a doctor as a member in quite a while. There happened to be two in this freshman class; DFL Sen. Matt Klein was the other and also tended to Dayton that night.

But Jensen had the advantage of being in the Senate’s majority party. His medical background instantly made him a go-to player on health care issues. Despite being a first-termer, he was made vice chair of a key health committee.

“I absolutely expect to have a seat at the table,” he declared just a couple of days into office.

His legislative portfolio reflected it. About two-thirds of the 179 bills Jensen introduced had a health care connection. Nine of them made it into law with the signature of Gov. Tim Walz, the DFL incumbent he’s trying to beat now as the Republican nominee.

Jensen cultivated a maverick reputation in his one and only term. He often vented about how the Capitol operated. He sometimes kept allies and adversaries guessing about where he’d come down.

It’s a contrast to his campaign for governor where he’s taken orthodox GOP stances favoring big tax cuts, a voucher-style education plan and a crackdown on crime. He built up his political standing by taking views on COVID-19 that were contrary to the prevailing medical community sentiment. Jensen has also floated dramatic changes, such as eliminating the personal income tax, only to reel them back in under criticism or frame them later as merely discussion starters.

He acknowledges being hemmed in by an environment that favors political caution.

“This is why so many of our ideas and our campaigns become so pedestrian,” Jensen said almost dejectedly this week. “There’s just no win in putting a big idea out there.”

As a senator, Jensen credited the governor with helping broker an insulin-cost agreement at a time when the bill looked hopelessly stalled. Jensen, the main sponsor, took to the Senate floor to thank Walz for “calling me over and asking how he could help to keep this bill moving forward.”

The bill under Jensen’s name was the most notable accomplishment of his term. It capped emergency insulin costs for people in financial distress and set up other long-term help.

“The bill provides for, if you will, an iron-clad operation whereby no one should fall through the cracks and find themselves desperate,” Jensen said in a speech as the bill moved to the brink of final passage.

It had been a bumpy ride. Supporters of the bill, including then-DFL Sen. Matt Little, accused Jensen and his party of dragging their feet for almost a year.

“It’s about time,” Little said. “This bill took far too long to get here for no reason.”

Throughout his Senate tenure, Jensen was tough to pin down.

He signed onto a bill to legalize marijuana but later said the issue should be decided by voters. He introduced a ranked-choice election bill, but then distanced himself from the concept. He worked with lawmakers seeking to restrict conversion therapy for gay children, then voted against that measure — to his own dismay.

“When I drive home tonight, I’m pretty sure I’ll be nauseated all the way,” Jensen confessed to colleagues before his vote.

And then there are guns.

After a Florida school shooting in 2018, Jensen made waves by signing onto bills to toughen gun laws.

Jensen’s support for the legislation drew the ire of gun rights advocates who previously supported him — and it led to an about-face when Jensen sought the Republican endorsement for governor. He apologized to convention delegates this May for even considering firearms restrictions.

“When I was in my first term as a senator I put myself on the wrong side of the gun issue by thinking I could compel a conversation by putting my name on a bill and removing it six weeks later that was a mistake and I’m sorry and I won’t ever do it again,” he assured.

The contrition worked and he landed the party backing after a drawn-out fight. He won the nomination in August without a competitive primary.

As the pandemic hit, Jensen put himself at the front of a crowded candidate field by tapping into conservative angst over COVID-19. He pounded at restrictions imposed by Walz and cast them as an overreaction.

Jensen argued on FOX News and other platforms that COVID death counts were inflated. He doubted the severity of the illness and the merits of and safety of vaccines compared with other treatments. That those views came from a seasoned doctor made Jensen a right-wing media regular. But it also opened him up to criticism that he was spreading conspiracy theories.

Throughout this campaign, Walz has labeled Jensen’s views “reckless.”

Jensen has expressed no regret about challenging convention.

His medical license came under scrutiny after multiple complaints were lodged, although none resulted in published findings or penalties.

“Scott Jensen is a man who put politics before patients and politics before his profession,” said infectious disease doctor Peter Bornstein, who is among the medical peers to publicly criticize Jensen.

But it’s another health care issue that’s been the main focus of Democratic campaign ads against Jensen: Abortion.

His position has shifted considerably.

“I would try to ban abortion,” he said on an MPR News program in March. “I think that we’re basically in a situation where we should be governed by pro-life. There is no reason for us to be having abortions going out. We have tremendous opportunities and availability of birth control. We don’t need to be snuffing out lives that if left alone will produce a viable newborn that may go on to be the next Albert Einstein.”

That was Jensen before winning his party’s backing when asked how he’d approach abortion in Minnesota if the U.S. Supreme Court nullified long-standing Roe vs. Wade protections, which it did in June.

Since then, he has softened his rhetoric by calling his prior remark “clumsy” and said as governor he couldn’t impose a ban if he wanted to.

“Well, an abortion is a life-saving medical procedure in certain, specific, given situations,” he said this summer. “I think we need to remember that.”

Jensen wasn’t the lead sponsor of any abortion bills as a legislator. He was a cosponsor of one abortion-related bill, and he voted for measures to restrict abortion or further regulate providers.

When Jensen announced he’d leave the Legislature, he grumbled about a political environment that struck him as toxic and built on party-line voting.

“When we disagree, we just go straight to contempt. I mean, we don’t just get angry at the other person, we despise them, we demean them,” he said in a TPT “Almanac” exit interview.

“We consider their perspective inferior. This is no way to get it done. Compromise has become a dirty word. If we can’t use the word ‘compromise’ then at least let’s collaborate,” he added. “If we would collaborate and work together jointly to try to find common ground, then see if the common ground can’t lead to something that gets done.”