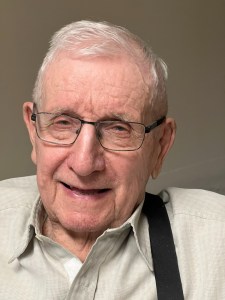 Leroy John Grund was born on December 13, 1926, to Joseph and Franziska (Deutsch) Grund in Laurens, IA.

John was a graduate of Marathon High School, Marathon, IA, Class of 1945. After graduation, John was drafted into the US Army, honorably serving during WWII. John worked hard in his bachelor’s life while farming with his brother. He then met and soon married the love of his life Joann McCormick on September 23, 1952, in Garner, IA. For a short time, the couple lived in Joice, IA before moving to their two farms in Emmons, MN. To this union were born six sons.

John spent his whole life farming and remained on the farm until health reasons took him off the farm and into Albert Lea when he was 92 years old. John and Joann enjoyed dancing at the Surf Ballroom, the Eagles Club, and the Golden Bubble while also driving many miles to various ballrooms in Minnesota and Iowa and traveling throughout the United States. They visited every state except Florida and Hawaii. John was an active member of the Emmons American Legion and St. James Catholic Church in Twin Lakes, MN for many years.