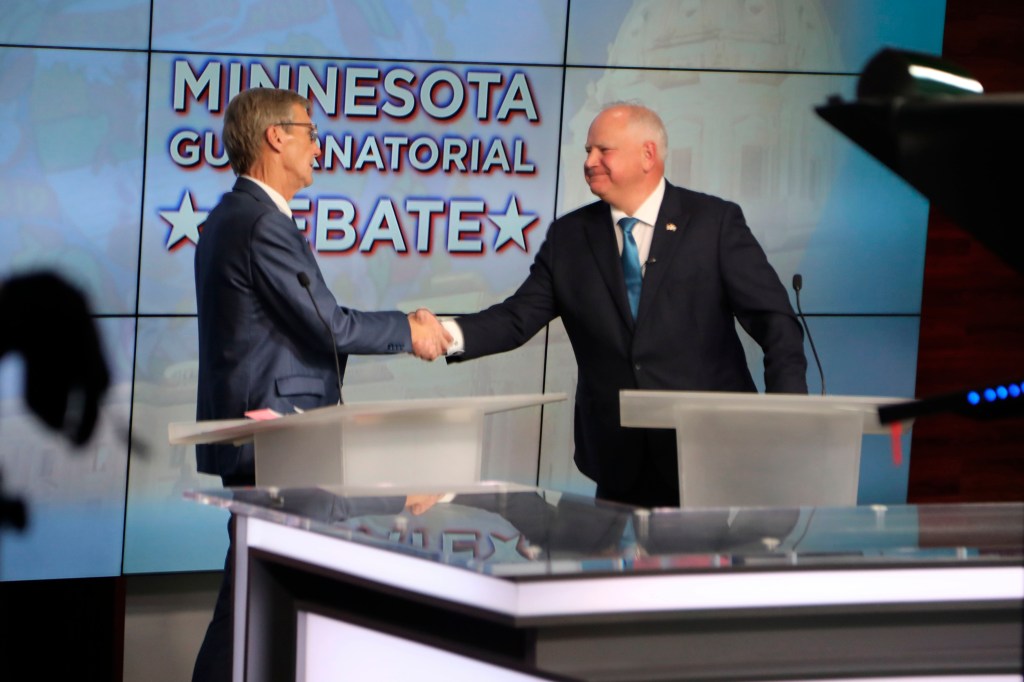 Minnesota Republican gubernatorial candidate Scott Jensen, left, and Democratic Gov. Tim Walz, shake hands before their debate at the studios of KTTC-TV in Rochester on Tuesday night. It was their only scheduled televised debate of the campaign. (Ben Mulholland/Pool Photo via AP)

MINNEAPOLIS — Republican challenger Scott Jensen launched sharp attacks against Minnesota Gov. Tim Walz on Tuesday night over his handling of the violent unrest that followed the police killing of George Floyd, expressing incredulity when the Democratic incumbent said he was proud of how his administration responded.

The two gubernatorial candidates also clashed over abortion, violent crime and a scandal involving $250 million stolen from a pandemic food-aid program. It was their only televised debate of the campaign. It was held at KTTC-TV in Rochester and also carried live by stations in Duluth, Fargo-Moorhead and Mankato, but it was available only by livestream in the Twin Cities. It was their first debate since FarmFest in southwestern Minnesota on Aug. 3. They’ll meet for their final scheduled debate Oct. 28 on Minnesota Public Radio.

Here are some key takeaways:

Both candidates were asked what they would have done differently to respond to the unrest that followed Floyd’s death in Minneapolis in 2020, which included looting across Minneapolis and St. Paul and the burning of a Minneapolis police station.

“Sitting on the sidelines and critiquing, that’s not what being governor is. It’s making the hard decisions at the time,” Walz said. He defended how local, state and federal authorities worked together, and said the lessons learned help prevent violence during former Officer Derek Chauvin’s trial for killing Floyd.

Jensen jumped on Walz for that.

“You heard it here. Gov. Walz just told you ‘I am proud of Minnesota’s response,’ referring to the riots in May and June of 2020. Wow,” he said, accusing the governor of failing to stand by the police and National Guard. “Burn that into your psyche, Minnesota.”

Walz said there’s a “clear contrast” between them on abortion rights He noted that Jensen said earlier in the campaign that he would support a ban on abortions, but softened that after the U.S. Supreme Court struck down the Roe v. Wade decision to include exceptions for rape, incest and to protect the health or life of the mother.

“In my entire career I’ve trusted women to make their health care decisions. I don’t believe anybody who sits in this office should come between them,” Walz said, suggesting that Jensen changes his positions as the winds blow.

Jensen tried to minimize the importance of issue, accusing Walz of “fear-mongering.” He said the only way to undo the state’s protections for abortion rights would be by putting a constitutional amendment on the ballot that voters would have to approve. He tried to pivot instead to inflation, crime and education.

Jensen said rising crime across Minnesota and at schools is “a product of the lawlessness that swept over our state,” after Floyd’s death, and he blamed Walz. “Arguably he is the godfather of the crime epidemic that has swept our country.”

Walz countered that the Republican-controlled Senate in the Minnesota Legislature, where Jensen used to serve, blocked his efforts to increase funding for law enforcement and to fight gun violence.

“We have the opportunity to do smart things, whether it be background checks or making sure we have red flag laws. … The easy access to firearms is one of the problems,” Walz said.

Jensen repeated claims made by Republican legislators on Monday that Walz could have stopped the Feeding our Future scandal before $250 million in taxpayer money was stolen from a state-administered federal program to feed children during the pandemic when they were kept home from school.

Federal authorities have charged 49 people in the case, which centers on a nonprofit group called Feeding our Future, and have thanked the Walz administration for its cooperation with the investigation.

Jensen said the governor has been evasive about what he knew about the fraud, and when he knew it, and accused Walz of a cover-up. He rejected the administration’s claims that its hands were tied by a judge’s order and instructions from the FBI not to compromise the investigation.

“Gov. Walz and his team could have stopped this anywhere along the line,” Jensen said.

Walz said everybody agrees that “fraud is unacceptable, whether it’s in the public sector or the private sector.” But he then turned the discussion to how his administration worked four years ago to fix a badly flawed — but not fraudulent — driver’s licensing computer system. It wasn’t clear how that was relevant.

The governor went on to say that the federal government relaxed its rules when it sent COVID-19 aid to the states — “as they should have’ — and that his administration alerted the FBI when it discovered the fraud.