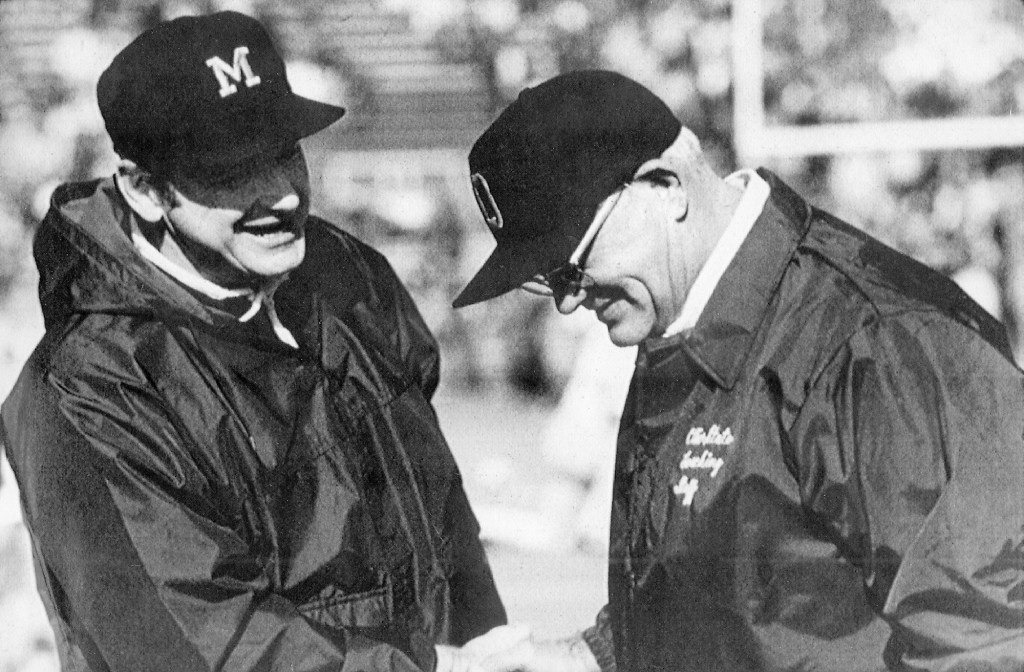 ANN ARBOR, Mich. — Ohio State and Michigan are making the Big Ten look like the Big Two and Little 12, rekindling memories for some of Woody Hayes and Bo Schembechler turning the chase for a conference championship into a two-team race.

“I do think Michigan and Ohio State are at different level than the rest of the conference” said Desmond Howard, the former Michigan star and Heisman Trophy winner who now works at ESPN. “I’m not sure I would compare Ryan Day and Jim Harbaugh to Woody and Bo because Ryan Day was handed keys to a Porche, he just had to continue what they were doing, whereas Jim Harbaugh had to build his program. No one gave Woody or Bo anything before they built their programs.”

Michigan won last year’s Big Ten title game after a four-win streak in that showcase by the Buckeyes. And in a shootout-filled era of college football, both teams rank among the top 10 in scoring offense and defense as they march toward their late-season showdown against each other.

“In the golden days of the Big Two and Little Eight, Michigan and Ohio State had the best defenses and they decided who won the Big Ten championship in The Game,” said former Michigan offensive lineman and radio broadcaster Jim Brandstatter, who played for Schembechler against Hayes. “And if you take a snapshot of this season, they’re the teams playing the best defense and it doesn’t seem like any team from the West can play with them.”

No. 16 Penn State can potentially be a factor in the because it hosts Ohio State on Oct. 29, but the Nittany Lions will have to play much better than they did while getting pummeled 41-17 at Michigan. James Franklin’s team does not appear to be equipped to slow down the C.J. Stroud-led balanced offense or to score much against Ohio State’s stingy defense.

Penn State defensive tackle PJ Mustipher said he and his teammates have to hold each other accountable.

“I think if we can do that, then we’ll be able to take the steps we need,” Mustipher said. “But if we start getting off track and going crazy after one loss, that’s when bad things happen.”

While upsets happen in college football, it would be relativly surprising if the Buckeyes or Wolverines have a loss when they meet Nov. 26 in Columbus. Prior to The Game, Ohio State has home games against Iowa and Indiana along with trips to Penn State, Northwestern and Maryland.

“We have to figure out how to get better in different areas,” Day said Oct. 8 after Stroud threw six touchdown passes in a 49-20 win at Michigan State. “We’re not going to sit here and say, `It’s a great game. We’re good.’ We have to keep building and keep growing.”

The Wolverines will play Michigan State, which has won 10 of the last 14 games in the rivalry, on Oct. 29 after an off week. They also host Nebraska and surprising Illinois and play at Rutgers and at Ohio State, where the maize and blue have not won since 2000.

Michigan has won 19 of its last 21 games since the pandemic-shortened season, but Harbaugh sees room for improvement.

“There’s still things that keep us humble,” he said.

If both traditional powers avoid an upset, they will decide who wins the East Division before playing as a heavy favorite against the West champion at the Big Ten championship game Dec. 3.

When the conference added a championship game in 2011, Wisconsin and the Spartans won two trophies and Penn State took home one in a six-year stretch.

That successful stretch by the rest of the league ended in 2017 when Ohio State won the first of four straight Big Ten titles. Harbaugh finally beat the Buckeyes for the first time as a coach last year and went on to rout Iowa, giving Michigan its first Big Ten championship since 2004.

Day and Harbaugh might end up dueling as Hayes and Schembechler did during what was known as the “Ten Year War,” from 1969 to 1978. The Wolverines and Buckeyes played for the Big Ten title each year during the 10-year run, with Schembechler going 5-4-1 against his former coach and mentor.

“There’s no question, the similarities are there,” Brandstatter said.