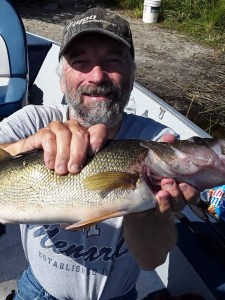 Rick was born December 14th, 1952 in Albert Lea, Minnesota, to Vera Dale Bosteter Neis Babcock and Maltbie Davenport Babcock. He attended & graduated from Alden High-School, had an adventure-filled hitchhiking excursion to California, & then completed his welding certificate back here at ALTEC. He held many jobs, one as a welder at Winnebago in Forest City, took a job at Universal-Milking Machine Division in Albert Lea, until it closed, he then worked at Streaters for a few years. After “Pa”, his dad, suffered from a stroke, Rick jokingly ran the “Convalescent Daycare Center” around 1988, when he was caretaker for both “Pa” & Holly. This began his self-employed journey. Rick’s skills list would be too long to list in one publication, here’s our take on a condensed list: woodsmith, electrician, fish pickler, backhoe operator, farmer, raccoon conservationist, gardener, comedian, “master baiter” fisherman, & social butterfly. One of his funnest joys was drumming & singing in many bands for over 25 years, especially the last band when he was playing with his son Shane. Fishing was one of his favorite hobbies, especially over the last few years. Added to that list would also be enjoying riding on trails up north, & happy hour with his newest collection of good camper friends.

In 1987, Rick was joined in marriage with Cindy. They built a beautiful life together, not only with their love, but by physically building their own home together with lumber sawn on the family-century-farm’s sawmill. Their home was one of Rick’s greatest accomplishments. He created many incredible wood furniture, cabinets, & projects for all the kids, & for many others. At the heart of Rick, he was a caretaker. Spending time with family had no limits on fun, there was nothing too silly, or too childlike if it meant being together. He was so proud of all of his kids & grandkids, he never missed an opportunity to tell them.

Rick was best known for his infectious laugh, being a helper (whether you wanted it or not), wearing his free-after-rebate Menards t-shirts, & always giving affectionate slaps on the shoulders or legs.

He was preceded in death by his parents, numerous aunts & uncles, & his mother-in-law Shirley.

We welcome you to gather to share memories & stories with us at Rick’s celebration of life at Edgewater Bay Pavilion in Albert Lea, MN on Sunday, October 9th starting with the family sharing memories at 11:00am, celebration will conclude at 4:00pm. We will enjoy one of Rick’s favorite meals, please come hungry. If you feel moved, please make a donation in Rick’s honor to the Freeborn County Humane Society or an organization of your choosing.