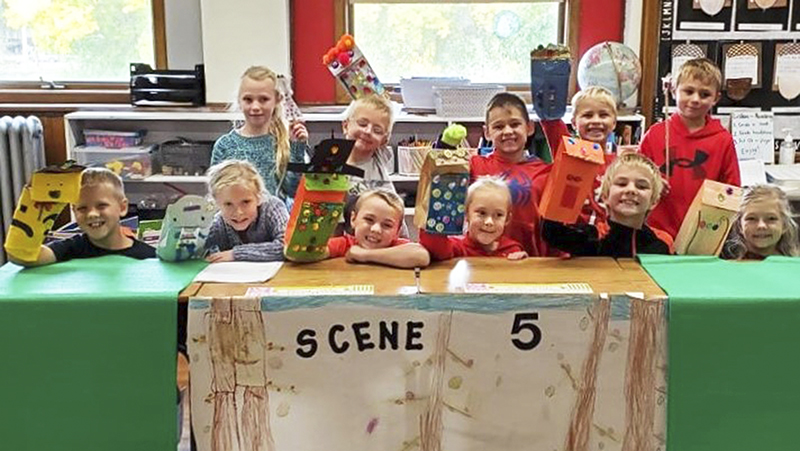 Students in Camille Tewes first- and second-grade class performed a puppet play. The play was designed to show students the importance of judging character in an individual. Provided

“Once there was a dragon named Rex. He was a ferocious and mean looking dragon, but in fact, his heart was full of love, beauty and kindness. What he wanted most in the world was friends to share all the beauty that was in his heart. So he decided to go make friends at a neighboring castle.”

With those words, the stage was set for the portrayal of the misadventures of Rex in “The Friendly Dragon.” Under the direction of their teacher, Camille Tewes, the first- and second-grade St. Casimir’s School students in Wells performed a puppet play to show how Rex was judged by others according to his fierce outside rather than his loving inside until he introduced himself to some young princesses who could see past Rex’s tough exterior.With the princesses’ help, Rex soon became known to all in the kingdom as everyone was reminded to “never judge someone by the way he looks or a book by the way it is covered. For inside those tattered pages, there’s a lot to be discovered.”

Bringing this play to life was a great experience for these young thespians as it also challenged their art skills when they created their own puppets and five scene changes. In addition, the students learned how to work collaboratively to produce a great performance. St. Casimir’s thanks their students.