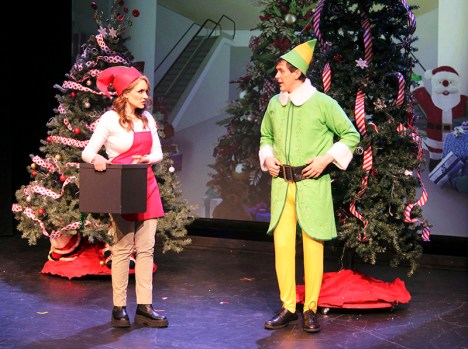 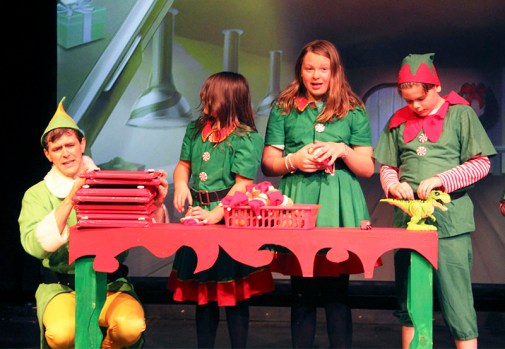 Stuart Ness laments on why his toy-making skills aren't as proficient as some of the other elves at the North Pole. Alex Guerrero/Albert Lea Tribune 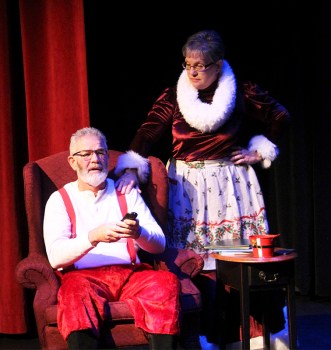 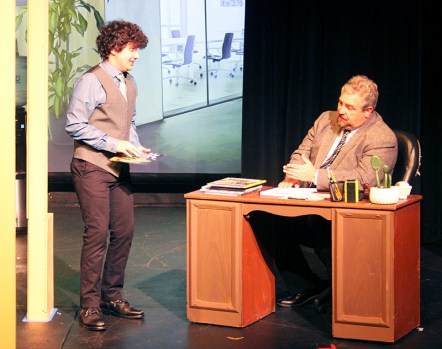 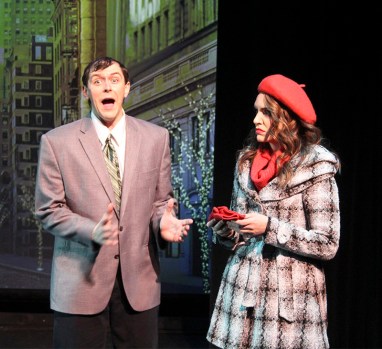 From left, Stuart Ness and Rachel Cole go on a date during a scene from "Elf the Musical." Alex Guerrero/Albert Lea Tribune

Production of “Elf the Musical” begins this week

Though she’s been involved in theater since kindergarten and with Albert Lea Community Theatre for several years now, Risha Lilienthal makes her ACT directorial debut when “Elf the Musical” — based on the 2003 movie starring Will Ferrell, James Caan and Zoey Deschanel — hits the stage for a two-week run starting Thursday.

“I just thought it was hilarious and fun and wholesome,” said Lilienthal after seeing the 2003 Christmas movie the first time. “There’s a lot of quotable moments in the movie.”

While this will be her first time directing at ACT, she has directing experience at both the high school and college levels.

“I love the collaborative nature of it,” she said. “The idea that you have to connect with people in order to do it.”

Lilienthal also believed theater helped develop a person’s creativity, helped to learn about different people and develop teamwork. Theater was also about telling a story, which she compared to history.

Being behind the curtain was different than being on stage, and she said there were a lot of moving pieces and that as a director you needed everybody’s help. Lilienthal also described working at a community theater as different from directing in school.

Auditions were Oct. 3 and 4, and rehearsals started Oct. 12.

“This show is similar enough to the movie where you get a lot of the same jokes and a lot of the fun goofiness and whimsical parts to it, but it also shows a little bit of a different kind of growth in the characters, especially Buddy.”

Lilienthal admitted it was easier for her to transition to a directorial role because there were people both on stage and in production who have helped her with the ins and outs. And those nuances such as the timings and expectations could be challenging for her.

On her expectations for the musical, Lilienthal hopes the audience laughs during the musical on a surface level, but she also wants people to learn “it’s never too late to grow,” a line from one of the songs.

“I think it’s an important lesson sometimes to know that growing up doesn’t mean that you have to be always serious and working and you have to give up things,” she said. “I think it also means that in growing up you don’t want to lose some of that whimsy that you sometimes have to with responsibility.”

“Buddy is like a little kid, kind of think about a 30-year-old in an 8-year-old’s mindset,” he said. “Everything is new and exciting to him and he’s getting the opportunity to move from a closed-off life at the North Pole and move down to the big city of New York and gets to experience all the things that we experience as humans when we go to those normal places, the big cities, except through the eyes of an 8-year-old.”

Ness has been involved in theater since he was little and loves being in front of people and entertaining.

He also loves musicals and described “Elf the Musical” as a great opportunity to show his talent.

“You get to work with a lot of neat people in the community and have fun, put on a great show,” he said.”It’s fun to get to pretend to be somebody that maybe you wish you could be, let yourself relax a little bit, revert to some of those childhood trends sometimes.”

Ness has worked with both ACT and Minnesota Festival Theatre.

“The most enjoyable part of it is getting to come out on stage and see how everybody interacts with each other and makes a world around everything, and every time you come out on to live theater it’s different.”

Steve Stoneking, who plays the role of the narrator, Santa Claus, said a lot of the show revolved around the belief in Santa and the Christmas spirit.

Stoneking has been in “Willy Wonka” and “Beauty and the Beast,” among others.

“I like bringing something to the community that they can enjoy, and I like the camaraderie that we have with the cast and the crew,” he said. “Everyone’s involved. It’s a lot of fun.”

Stoneking has been in theater for over a decade.

Lucas Johnson plays a cop, a fake Santa and an assistant to Walter Hobbs.

Johnson started doing shows in Austin when he was 7 and continued through high school, has a degree in arts and admitted he’d done over 300 productions.

Johnson was most recently in “Addams Family the Musical” at Riverland Community College.

Johnson and his daughter, Mollie, were in last year’s Christmas show through ACT, and the duo decided to do it again this year

“Basically it was her idea, and I’m just a dad and having fun with her,” he said.