Annette Marie Jensen, 70, of Faribault died on Thursday, September 8 at the Methodist Hospital in Rochester following a long battle with cancer. 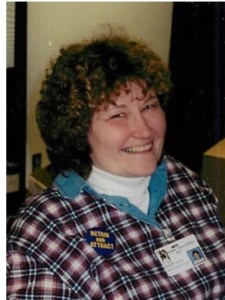 Annette was born on January 16, 1952 in Naeve Hospital in Albert Lea, Minnesota to Ardis and Oliver Jensen. She was the second of five daughters.

Annette attended Albert Lea schools until ninth grade when her family moved to rural Emmons. She graduated from Emmons High School in 1970. Annette was active in many school activities such as newspaper and yearbook staff, as well as serving as the school’s Eagle mascot. She was also very active in Girl Scouts, working for many summers at Girl Scout camps in a variety of positions including counselor, nurse, working her way up to director. Annette graduated from Winona State College as a registered nurse in 1974. After college she worked as an RN in several hospitals in Minnesota and Georgia, finishing her career as a school nurse in Rosemount, Minnesota. She retired in 2009.

In 2003 Annette fought her first battle with cancer and won; a tiny lady and fierce warrior in the effort to beat cancer!

Annette was a great story teller, loving nothing better than a captive audience. She was a much loved aunt, always knowing exactly what her nieces and nephews were interested in! She made it her goal to attend every one of their graduations, missing only one during the pandemic. She often collected items with a specific person in mind. It was not unusual to receive a bag of things she had collected just for you. She loved phone calls – 4 hours was a short phone call for her! She was well read and you usually finished a phone call knowing more than you did when you started the call! Annette was definitely a pet person, having owned many dogs and cats over the years. They were her children. Annette had an infectious smile and the gift for wanting the very best for those she loved. She will be missed.

Annette was preceded in death by her parents Ardis and Oliver Jensen, her brothers-in-law Irv Busman and Gary Oney, and her nephew-in-law Eric Schaap.

Annette will be buried alongside her parents at Hillcrest Cemetery in Albert Lea. A family gathering will be held at the home of Brenda and Roger Swanson of Albert Lea on Saturday, November 5, 2022 from 2-4 pm.

May her memory be a blessing.