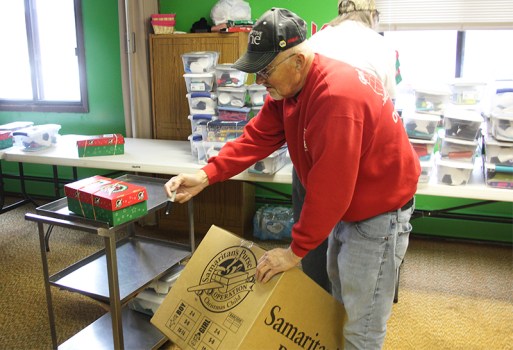 Wayne Woodard tapes a box shut, which will go to Rochester next week as part of Operation Christmas Child. Volunteers started collecting boxes for the effort on Monday and will continue the rest of the week. Alex Guerrero/Albert Lea Tribune 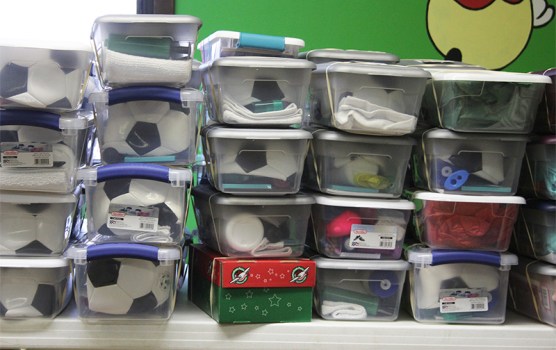 Boxes full of items are stacked to be sorted into a larger box as part of Operation Christmas Child, which is this week at Bridge Community Church. Alex Guerrero/Albert Lea Tribune 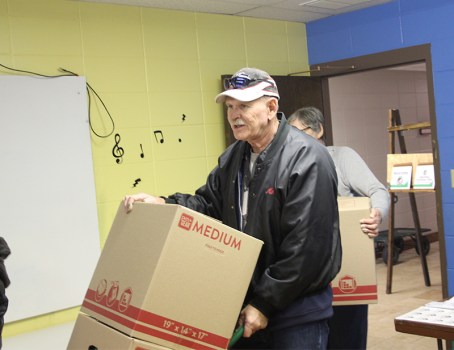 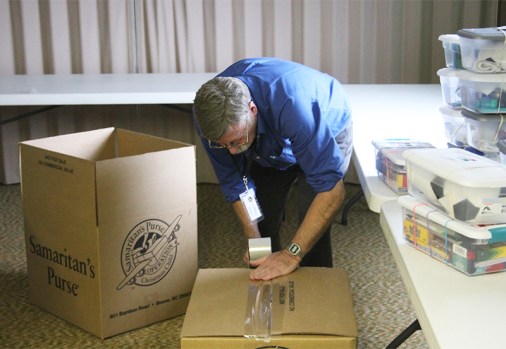 Operation Christmas Child is back at Bridge Community Church.

Throughout the week, Olson and her team will be collecting boxes for children, specifically boys or girls in age groups of 2 to 4, 5 to 9 and 10 to 14.

Inside the boxes are a “wow”  gift, something like a stuffed animal, doll or soccer ball, Olson said. After the gift goes school and personal items (but not toothpaste) and then little toys.

“The ‘wow’ toy would be a bigger item, and the regular toys are smaller,” she said.

Items have been collected at Bridge Community Church all year.

After items are put in the boxes, $10 goes into a postage-paid envelope and they are sent off to Samaritan’s Purse.

After Olson and her team finish filling the boxes, she’ll take them to Rochester, which will then be sent to Chicago. While there, a pamphlet about Jesus Christ will be included in each box.

After arriving there, workers will go through boxes and remove anything that shouldn’t be included and, if needed, add more. They’ll then be shipped all over the world. And after boxes arrive to their area of destination, a local church will receive and distribute them. They’ll then have a discipleship class with the hope of converting them to Christianity.

Olson said she got involved after hearing about it from her pastor.

“We did some ourselves, and then he took it up to Owatonna, which was a collection site.

“Then they called and asked me if I would be involved in the area, so that’s how I got started,” she said.

She mentioned this was a labor of love.

According to Olson, a pastor in Rochester who is from Ghana received a box as a child.

“There’s so many stories about kids receiving them and changing their life,” she said.

Operation Christmas Child is part of Samaritan’s Purse, an evangelical Christian humanitarian aid organization. According to Olson, many times children won’t get boxes until after Christmas.

“That’s the day we load a trailer and take it over to Rochester.,” she said.

James Van Riper has volunteered for the program since 2010.

“Just a good cause and a lot of people get help,” he said.

His favorite part of it was seeing people together at the church and sharing fellowship.

Olson has been involved in Operation Christmas Child for 14 years, and it was 28 years ago that Samaritan Church’s Franklin Graham requested assistance for children in Bosnia, which started the holiday operation.