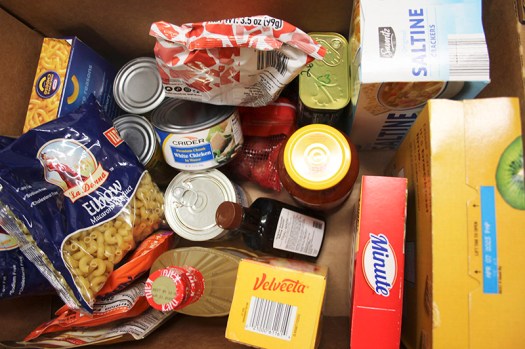 Some of the food available at the Salvation Army's food pantry. Alex Guerrero/Albert Lea Tribune 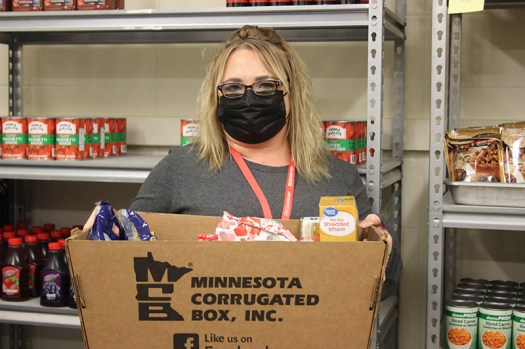 Amber Voshell, case manager at the Salvation Army, holds up a box full of food. With food prices rising, some items are only available once or twice per month depending on shipments. Alex Guerrero/Albert Lea Tribune 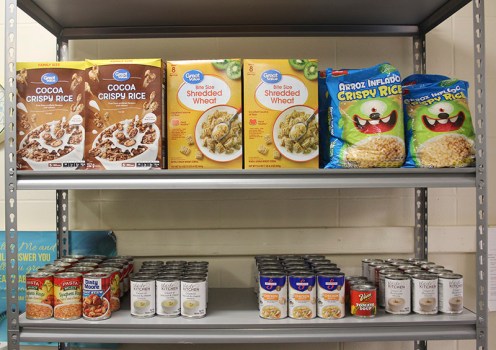 Food that is available at the Salvation Army. Rising food prices have caused the organization to run lower on meat products. Alex Guerrero/Albert Lea Tribune 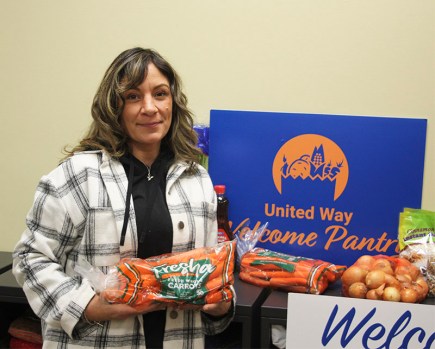 Nikolle Guion, a co-coordinator for community impact and resource coordinator for United Way of Freeborn County, holds up a bag of carrots. The organization this year has started the Welcome Pantry to help address food insecurity in the community. Alex Guerrero/Albert Lea Tribune

With inflation rates as they are, it’s no secret costs on virtually everything are increasing. And with the holidays here, families are turning for help.

The organization typically buys food from Channel One Regional Food Bank and Food Shelf in Rochester because the cost is cheaper.

To compensate for the smaller amounts of food, the Salvation Army has to buy from other sources. But even with discounts, food is still more expensive.

“We find we spend more money on food than we have before,” she said.

The need is also higher than it was in the past, and Hunt said the organization had already seen twice the number of families in need of help compared to last year.

“And we’re not even at the end of the year,” she said.

“The rise in cost makes it so that we have to supplement,” Salvation Army Capt. Marie Lewis said. “We can’t supplement as much as we would have previously.”

For example, the organization might hand out one can of soup where clients could previously get two or three cans.

According to Amber Voshell, a case worker for the Salvation Army, meat — canned and fresh — is hard to find due to cost and high demand.

“Even stores are having a hard time keeping them in stock for their clients, their normal purchasing clients,” Lewis said. “We are getting donations  from people based off what they can get at the store or what the stores donate to the food pantry.”

Beans, both canned and fresh, have also been hard to get, and when they do get them it’s typically once per month.

“We have it when we have it and that’s about it,” she said.

Because of price increases, flour and sugar, as well as condiments, are also hard to find.

“Condiments like ketchup, jellies, we try to have oils, stuff like that, will go along with a meal so they can make a meal,” Voshell said.

And everything they have has also experienced a price increase, so she’s had to buy more items whereas previously more items would be donated. And they have had to limit the number of times clients could come to twice per month.

“We used to have it to where clients could come as needed,” she said.

John Double, chairman of the board of directors for the United Way of Freeborn County, was also seeing food prices increase.

According to statistics from the U.S. Bureau of Labor, in September the cost of food at home had increased 13%. Cereal and baked goods rose over 16%; dairy and “related products” almost 16%; meat, poultry, fish and eggs almost 10%; and fruits and vegetables over 10%. The prices for non-alcoholic beverages and beverage materials have risen by almost 13%, protein 8% and fruit and vegetable prices have risen by over 9%.

“What people can afford has really changed,” Double said. “… When you’re talking about adding 10-15% to a family’s budget just for food, where does that money come from and then what are you giving up?”

He didn’t have a specific explanation for the increased prices, but said increased wages, employee shortages, supply issues and inflation in general could be factoring into the higher prices. According to the U.S. Inflation Calculator, inflation has risen over 16% in the last two years.

From July to November, the United Way’s Welcome Pantry had put out over 39,000 pounds of food.

“The big thing that the United Way is doing is just trying to make the food more available to families that needed it, so that way when they’re trying to decide between food on the table and paying their bills, there’s an option that doesn’t cost you anything to come in and get food from our pantry to help your family out,” he said.

To find food, the organization has also turned to Channel One, who are more able to get commodities.

“We’re trying to request the things that we know the families are having the most difficulty acquiring,” he said.

Within the county, 42% of food requests dealt with either proteins or dairy. Those items are also hardest to find at reasonable prices.

Currently, he said he was seeing turkey at almost $2 per pound. He also remembered seeing ham for $3.99 per pound last year. This year ham is $5 per pound.

Double predicted this Thanksgiving meal could cost 30 to 40% more than last year.

On average, the organization is providing food for 209 households, serving 200 youth, 144 seniors and 274 adults.

Double speculated one reason the distribution was becoming more popular was because of its newness.

“We’ve got such a need here in Freeborn County, and they needed more resources than our county was providing,” Double said. “So by opening the … Welcome Pantry and working with the other food banks that are in the area, we’re trying to meet that need in our community.”

Hunt said though finding what they needed was tougher, the organization would always remain open to help people in need.

“There’s a lot more need out there than we recognize,” Double said. “Taking that interest in our neighbor to help everybody through these challenging times is encouraged. I’m just happy to be part of the United Way that’s looking to do that.”