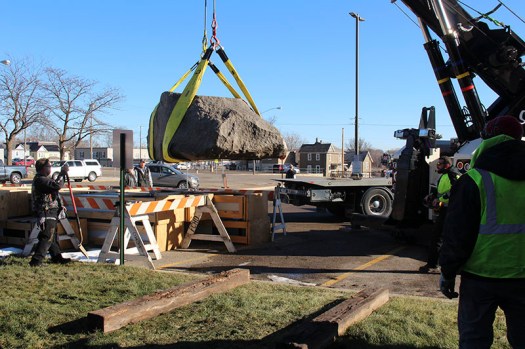 The 28,000-pound boulder is carried off of a Dean's Towing truck Friday morning outside the Freeborn County courthouse. Sarah Stultz/Albert Lea Tribune 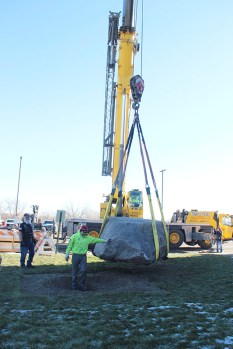 A large Meyerhofer crane was used to lift the boulder to its designated site on the Freeborn County courthouse lawn. Sarah Stultz/Albert Lea Tribune 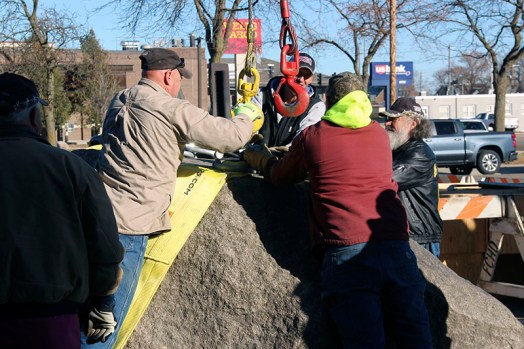 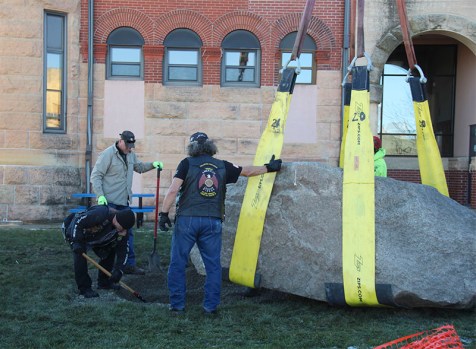 American Legion Riders dig out a little more on the ground before the boulder is placed Friday morning. Sarah Stultz/Albert Lea Tribune 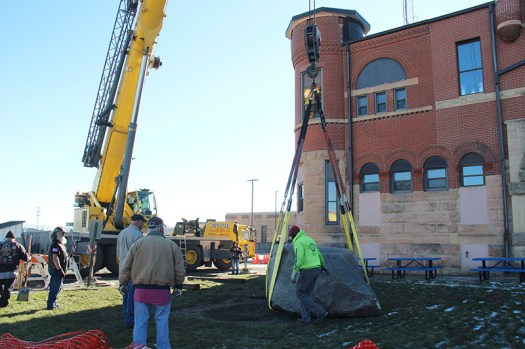 Crews manuever the boulder outside the Freeborn County courthouse as American Legion Riders look on. The Legion Riders hope to honor veterans with the rock, which will be painted by Ray "Bubba" Sorensen. Sarah Stultz/Albert Lea Tribune 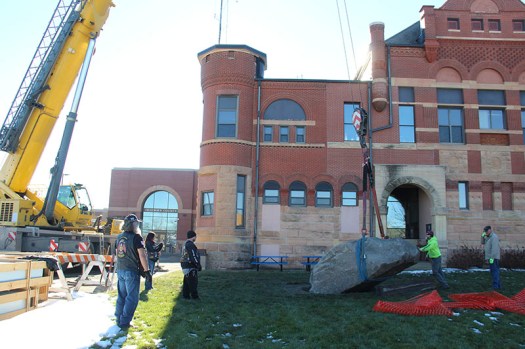 Crews from Dean’s Towing brought the boulder to the Freeborn County courthouse Friday morning and then Meyerhofer Crane & Rigging Services transferred it to the site on the lawn where it will remain. It took a few attempts before the boulder was placed upright on the lawn. Sarah Stultz/Albert Lea Tribune 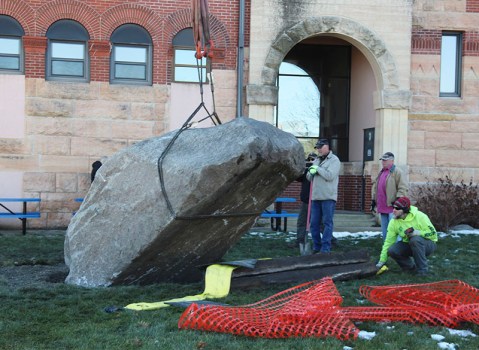 Crews from Meyerhofer Crane & Rigging Services and Dean's Towing helped get the boulder to the courthouse and then transferred to the site on the courthouse lawn where its new permanent home will be until it is painted in the summer. Sarah Stultz/Albert Lea Tribune 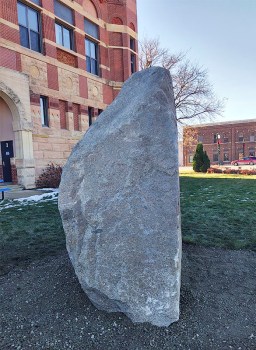 After some manuevering, the boulder is placed upright outside the courthouse, where it will be painted in the summer. Provided

Freeborn County’s Freedom Rock is one step closer to reality.

Crews from Dean’s Towing on Friday hauled the 28,000-pound boulder into town that next summer will be transformed into the Freedom Rock honoring veterans and fallen military members.

The boulder was set in place outside the north side of the Freeborn County courthouse with a large crane and crews from Meyerhofer Crane & Rigging Services.

Albert Lea American Legion Riders member Scott Kallberg said the 10-foot-tall and 6-foot-wide boulder was found north of Albert Lea between Good Samaritan Society and the shooting range to the north and will be painted by artist Ray “Bubba Sorensen II in July.

Freedom Rocks originated in Iowa by Sorensen with a 12-foot-tall boulder in southwest Iowa near the small town of Menlo, Iowa. In 1999, Sorensen painted a simple “thank you” to veterans on the boulder and has continued to honor veterans by donating his time for new murals on this boulder every May for Memorial Day, drawing in people each year to see what he has created.

To expand this message further, Sorensen felt compelled to do more and set out in hopes of every county in Iowa having a Freedom Rock of their own. He has also painted a handful in Minnesota, including Kasson.

Kallberg said the Legion Riders made a $2,000 down payment to lock-in Sorensen for July and seek to raise another $12,000 to $13,000 to pay for Sorensen’s travel and expenses. They may seek to raise closer to $20,000 to include funds for a possible gazebo or other structure that can help protect the rock from the elements.

He said already he has been pleased with the response from the community, including the two companies that donated their time and efforts to bring the boulder to town and set it up outside the courthouse. He also recognized Peterson Excavating and D&K Demolition & Excavation.

“We’ve had so much help from people donating,” Kallberg said. “The community comes together for this stuff.”

The Riders continue to gather ideas for what will be painted on the boulder, though Kallberg said they know they want to honor as many people as they can. He said there will definitely be some type of recognition for Vietnam veterans, as well as Chief Warrant Officer Corey Goodnature, an area native who was killed in 2005 when his company’s helicopter was shot down in Afghanistan while attempting to rescue missing U.S. Navy SEALS.

Kallberg said he and three other Riders were touring some of the Freedom Rocks in Iowa when they realized while in Alba, Iowa, that they should bring one to Freeborn County, too. They reached out to fellow Legion Rider Ted Herman, the 5th District Freeborn County commissioner, who helped bring the idea to the county board, and it was ultimately approved.

“Everything has come together at the right time,” said Legion Rider Bruce Camerer.

“We’re doing it to bring out awareness for veterans,” Kallberg said.

Anyone who wishes to contribute to the cause can bring their donation to the American Legion. Kallberg said they hope to set up a fund under the Albert Lea Freeborn County Chamber Foundation to allow people to give tax-deductible donationsi.