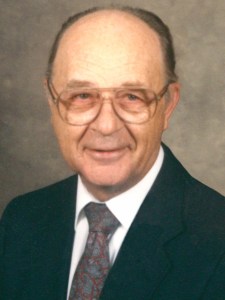 Earl was born on June 23, 1924 in Albert Lea, Minnesota to Roy and Anna (Olson) Nelson. He graduated from Albert Lea High School before joining the Navy and serving as a naval aviator in WWII. After the war Earl married Leanna Rogers on May 15, 1947 in Reading, MN. He earned a bachelor’s degree from The University of Minnesota in 1949 and began his extensive career in Banking in Iowa, Minnesota and Florida. Earl was a member of the Pioneer Banker Club, a recognition for attaining 50 years of active service in banking. Earl enjoyed golfing, working on his yard and spending time with his family.

He was preceded in death by his parents, wife and three siblings; Russell, Richard and Dorothy Ann.

Earl’s family would like to thank the Iowa City VA for the care they provided for the last 15 years.

Private family services will be held. In lieu of flowers, memorial donations may be made to Iowa City Hospice.

Online condolences may be shared with his family at www.lensingfuneral.com