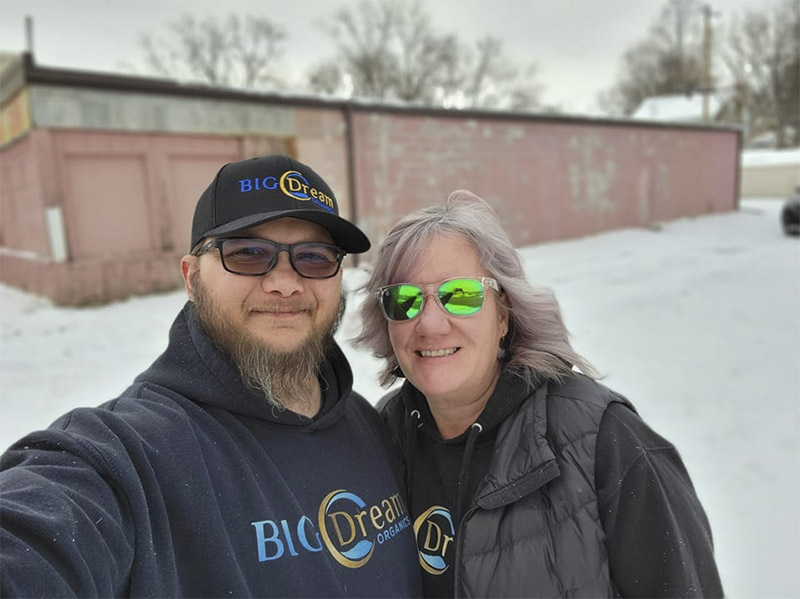 Jerry and Angie Collins, owners of Big Dream Organics in Albert Lea, purchased the building at 1039 S. Broadway Ave. last week from the city with plans to renovate it for their business. Provided

A new pilot project started by the city of Albert Lea earlier this year is showing promise with the sale of the first property in the project back to the private market last week.

Big Dream Organics of Albert Lea purchased the building at 1039 S. Broadway Ave. for $29,900 after the city repaired the roof, put in electrical service to the building and provided some other wall fixes. The building had initially been slated for demolition because of its poor condition.

City leaders decided earlier this year that instead of spending the money to demolish the building and two others that had been acquired through tax-forfeiture in the initial project, they would use that money to make some structural repairs and then return it to the private market for further updates.

For the South Broadway building, the city spent a little more than $49,000 on the repairs and closing costs. While the costs exceeded the purchase price, the city spent less than it would have on demolition, saving money in the end.

“This storefront will become fully rehabilitated, creating jobs, generating taxes and making an improvement along our main corridor. We are excited about Big Dream Organics taking on this project and expanding here in Albert Lea,” said Albert Lea City Manager Ian Rigg in a press release.

The city had received three proposals for the building, and the council voted Sept. 12 to accept the one from Big Dream Organics. Built in 1920 and zoned for business, the building provides 24-by-80-feet of open space on a lot about 5,600 square feet in size.

Jerry Collins, who owns Big Dream Organics with his wife, Angie, said they are excited to be a part of a project that will help them expand their business and rehabilitate a building that had memories for many. The building was historically known as Duck’s Tap, and through the years has also been Domino’s Pizza and, more recently, storage for its owner.

“I think there needs to be credit given to the city staff and management, and the City Council and the mayor’s office … for making a decision to instead of just demolish buildings and have them gone forever to try and rehabilitate some of these things,” he said. “The fact of the matter is that to rehabilitate that building for what we wanted to do without the city stepping in, and putting a roof on and the gutters and the service — spending those dollars — that building was not viable for rehabilitation, certainly not to a retail store.”

Angie Collins said Big Dream Organics started in May 2019 when her husband struggled to sleep. He did some research on CBD and how it is helpful with different things, including inflammation and sleep. And they decided to run with it from there, setting up an LLC and opening a store in Skyline Plaza. The store sells legal cannabis products such as CBD oils.

The Collins said they had already been looking for a new building because of expanding laws surrounding cannabis on the state level and had been considering a different location when the opportunity for the South Broadway building came up. They have also always wanted to rehabilitate a property in town.

Had it not been for the improvements the city made to the roof primarily, the building would not have been one they would have considered.

“This is a good opportunity for a business like us,” he said.

Aside from the new roof and the block walls that will remain, the building will undergo a complete transformation, with everything from new sheetrock, insulation, siding, doors, storefront windows, flooring, high-efficiency HVAC and water heater, and LED lighting to name a few.

“Literally everything except for (the roof), the block walls and part of the slab will be brand new,” he said.

The building will include a retail space, bathroom, office and kitchen area.

They hope to be able to occupy the space by April with the help of local contractors and then have a grand opening shortly thereafter, as long as all of the pieces fall into place.

“I think when people see the end product, they’ll be like, ‘Oh that was a good idea,’” he said.

Jerry Collins said they look forward to being on South Broadway and working with other business owners in the area to bring more events to that part of town.

Big Dream Organics employs three people — the Collins and one other employee.