I am thankful for the Big Island Rendezvous. This was our 36th year. I have been part of the event from the first year; and every year I learn new things. 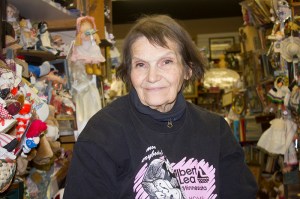 I do not know my forefathers and foremothers by name. I knew in my head that they had come across the ocean, but because of the Rendezvous, I feel I have gotten acquainted with them in spirit and I now know them in my heart. It is because of them that I am an American!

They were getting on that boat in Norway, leaving the only home they had known, hugging and waving goodbye to family and friends, knowing they would never see them again. If I had been born in Norway, that would not have been a bad thing, but I’m glad I was born here.

They had to pack enough food for the journey; in a wooden box — smoked meat, dried vegetables and fruit. There was no cafeteria on the ship.

Some became ill on the trip and died and were buried at sea. Thankfully they were not my forefathers or foremothers or I would not be here!

How relieved they must have been to leave that ship and at least step on the ground of their new country. They wanted to go West where they would have their own land.

Acquiring a covered wagon, they made wooden chairs and maybe a small table that would fold up so as not to take up so much space in the covered wagon.

They had to plan their trip — when they got to the mighty Mississippi, was there a ferry? Did they come early spring or late fall and cross on ice?

History books tell the names of generals and the dates of wars, but the Rendezvous teaches us how people lived.

If they wanted to have a hot meal, they had to chop wood. They knew how to start a fire without matches.

They hunted and fished, not as a sport, but because they needed food. They saved the skins as trade goods. Antlers were cut to make buttons. They were frugal, even saving scraps of cloth to make patchwork quilts.

They were creative. If they needed something, they most likely tried to make it with the materials they had. They could not run to Walmart for Scotch tape or glue.

Most families had a dog, not just as a pet, but for protection and warmth.

Their first homes could have been a dugout in the side of a hill, later a log cabin.

They loved to tell stories, a form of entertainment. They had no radio or TV. They passed down tales of the old country so their children and grandchildren would know their own history.

Early times before there were schools, they were taught at home in the evenings by candlelight; from the Bible and the few books they had brought with them. They had a strong faith in God, which has been passed on to me.

They loved music and they liked to sing. They found time to laugh. When there was an event that brought family and neighbors together, someone would bring a violin and there would be music and dancing.

They worked together as a family. Even small children had chores to do. They brought seeds from Norway for fruits and vegetables and even flowers. Always they planned for the future! They had great determination and courage. I’m proud to know I come from strong people!

In 36 years I think of the thousands of children who have come to the Rendezvous to learn.

I thank the city of Albert Lea, who took an abandoned mink farm and made Bancroft Bay Park.

Remembering all the volunteers over 36 years, these “giving people” — because of them, the event continues to exist.

The bus service makes it easy for people to attend.

The dedicated board of directors, who upon the end of one event, begin planning for the next year.

And to our Bourgeois, Perry Vining, who came to southern Minnesota, looked us over and thought this would be a good location for a Rendezvous, we all say, “Thank you, Perry!”