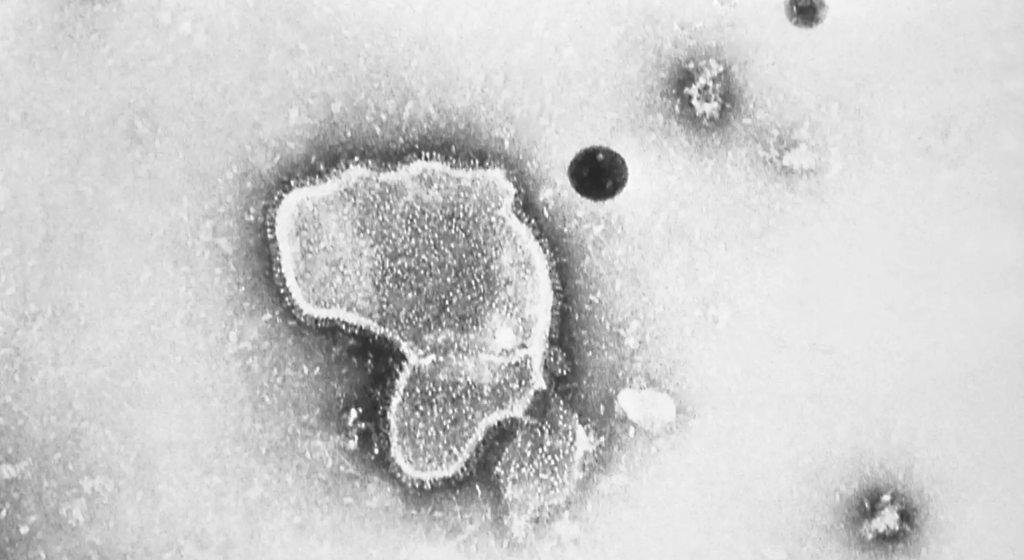 This 1981 photo provided by the Centers for Disease Control and Prevention shows an electron micrograph of Respiratory Syncytial Virus, also known as RSV. Associated Press file

Hospitalizations due to RSV cases are continuing to climb in the Twin Cities, mainly among children younger than one. The most recent state report reflects what doctors are seeing across the country, and raising concerns about how health care systems will manage this spike in infections amid flu season, and a potential COVID surge.

RSV — or respiratory syncytial virus — often presents like a mild cold, with symptoms that often include a runny nose, fever, coughing and sneezing.

“It’s a virus that almost everybody gets very early in their life,” said Jeff Sanders, epidemiologist with the Minnesota Department of Health. “I think most people are infected with it by the time they’re 2 years old.”

But it can be severe, especially for young kids.

“The particular gift of RSV is to get down into the lower respiratory tract — it does that much better than any cold virus — and then spread throughout your body,” said Dr. Frank Rhame, infectious diseases physician at Allina Health. “When you’re under 6 months, the tubules [in their lungs] are small. So if they get edematous — if they swell — it’s hard for those babes to move air.”

The virus can also be dangerous for older adults and people with weakened immune systems, worsening certain conditions, like asthma, and potentially causing pneumonia or a lung infection.

Sanders said the state has been seeing an uptick in positive cases for months.

“At work right now, we’re just watching week by week to see if there’s any signs of RSV slowing down, or if it’s going to kind of keep up this upward trend,” he said.

Nationwide, the surge in RSV cases is already challenging hospital capacity and increasing worries about a “triple-demic” of influenza, COVID and RSV. Children’s Minnesota is warning patients that they may experience “extended wait times” in its emergency departments, walk-in clinics and at primary care providers due to RSV.

Part of the challenge, according to MDH’s Sanders, is that viruses like RSV and influenza got thrown off their usual cycles when the pandemic hit, making it more challenging to predict the peaks and valleys. Sanders said they’re watching to see if the viruses return to their pre-pandemic cycles.

While hospitals regularly do surge planning to help them prepare for the season, it’s hard to predict when one virus will peak, let alone all three.

“Is RSV going to stay as high as it is? Or is it going to come down as fast as it went up? Is influenza going to peak and be at the same peak as RSV? Or is it going to take a slower path to that? And is COVID going to be coming in the winter months and have those all hit at the same time?” said Patsy Stinchfield, pediatric nurse and president of the National Foundation for Infectious Diseases.

Still, Stinchfield’s not in favor of the “triple-demic” moniker because there are numerous other issues that hospitals will likely have to contend with at the same time.

“Like adenovirus, rhinovirus, enterovirus, and then, of course, all the other things that kids go to hospitals for,” she said. “So these are things that we don’t have a crystal ball for and are really hard to predict.”

One likely factor in why we’re seeing more RSV infections, and why experts say this flu season may be worse than in previous years, is that more people are returning to their pre-pandemic lifestyles. As more people return to in-person work and kids return to school or daycare, there are more opportunities for infection and reinfection.

“On top of that, people go to work and they go to school, and they go to childcare when they have symptoms,” Stinchfield said. “And I think that’s what’s making things persistently spread so quickly now.”

While there currently isn’t a vaccine for RSV, there are some on the horizon. The pharmaceutical company Pfizer announced on Nov. 1 that it plans to submit a vaccine for the virus to the U.S. Food and Drug Administration before the end of 2022.

Allina Health participated in trials for Pfizer’s vaccine in 2020.

“We can’t get good immunity by vaccinating kids under 6 months,” said Dr. Rhame, who was lead investigator for the local study. “The only way we can really get immunity to them is by vaccinating their moms, and having the antibodies get across the placenta.”

Meanwhile, U.K.-based company GSK recently announced that its vaccine candidate has been granted priority review by the agency.

For now, experts say the best thing parents can do for their kids is focus on prevention and best health practices, like handwashing, staying home when sick and masking. A good first step, Stinchfield said, is making sure your family is updated on flu and COVID vaccines.

If a child does get sick, Stinchfield said there are signs to watch for that indicate you should reach out to a health care provider.

“A parent should bring a child into a hospital if they’re having difficulty breathing; if [the child] can’t catch their breath; if they’re listless or lethargic; if they’re not drinking enough to the point that they’re not having wet diapers or urinating very much,” Stinchfield said.

But many cases, she said, can be managed at home. Making sure they’re well-hydrated and breathing okay, and providing pain medication for headaches and muscle aches.

“Ask yourself: What would I want right now? That’s probably what your child would want too,” she said.