Hundreds come out for Ball in the Mall 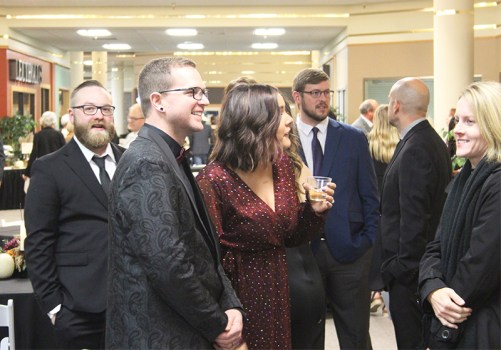 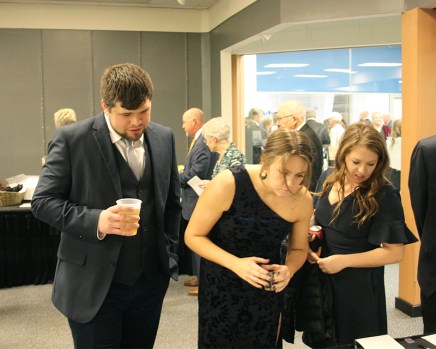 From left, Brandon and Samantha Hall and Jessica Hendricks look over items available during the auctions. Alex Guerrero/Albert Lea Tribune 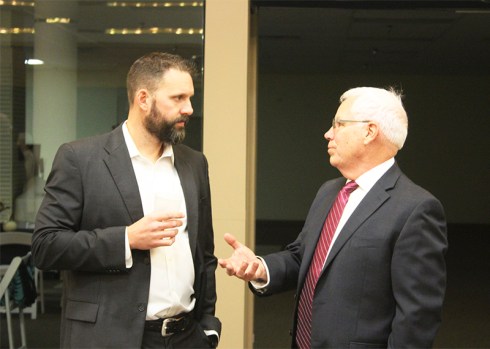 If it seemed like both Northbridge Mall and the John & Susan Morrison Medical Plaza were busier than usual for a Saturday night, your eyes were not deceiving you. That’s because the Albert Lea Healthcare Coalition held “Autumn Elegance: A Ball in the Mall.”

Jean Eaton, an adviser for the event, described it as a semi-formal “red-carpet event.”

Mark and Emma Habben served as co-chairs. The purpose of the event was to raise money for the second phase of the expansion of services at the John & Susan Morrison Medical Plaza, which will include a buildout of community health, particularly the MeryOne clinic. Their goal for the night was to raise $100,000.

Mark Habben said the second phase of the project is expected to cost “a couple million dollars.”

“We should make our goal of over $100,000, depending on how the live auction and silent auction goes,” Mark Habben said.

“With that we’ll be able to expand our health care hours, that we are able to support the people,” he said. “Urgent care will be extended, and just having more specialty services.”

According to Emma Habben, the coalition was already close to meeting its target, and that was before the auctions.

Besides a variety of local food vendors, the Johnny Holm band was there, as well as Sundae & Mr. Goessl jazz band. The Albert Lea High School Orchestra opened the event as attendees arrived.

Balls have previously been held at the mall for other events, so it made sense for the Habbens — as well as other chairpeople including Holly Miller, Danielle and John Schipper, and Marcia Sczublewski  among others — to do a similar event where people came out and celebrated Albert Lea.

Mark Habben said community reaction for the event was “very positive,” and before the event started around 400 tickets were sold.

“We feel comfortable that we’ll have a good outing and a good turnout,” he said.

Alyssa Jensen volunteered to work at the event. Jensen was representing the Fellowship of Christian Athletes at Albert Lea High School.

“I know we need more funding, and I really support that organization,” she said.

Georgiann Quinn was an active member of the Albert Lea Healthcare Coalition, though she wasn’t involved in the ball.

Her husband, Ken Quinn, said the event was overdue because he felt the Mayo Clinic needed competition. He worked for Mayo for over 25 years.

Like the Habbens, Eaton, Miller, the Schippers and Sczublewski, Leean Dulitz was also involved in planning the event.

“I think it’s an excellent opportunity for the community to get together, to celebrate health care in Albert Lea, and I think it’s just a great social event,” she said. “It’s been years since we’ve had a Ball in the Mall. I hope a lot of people are attending and can enjoy themselves while raising money for a good cause.”

Mark Habben wanted to make something clear: The Albert Lea Healthcare Coalition was not competing against Mayo Clinic Albert Lea. Habben said MercyOne came in with the goal to provide affordable health care.

“It’s not us vs. them,” he said. “It’s good for all residents and provides a second option.”

“To have options,” Emma Habben added.

Before the event, she also thanked the planning team for helping put the ball together.

“They all just worked so hard so it came together very smoothly,” she said.

Planning for the event started in the spring.