‘It turned out to be quite a blessing’: Woman, sentenced to prison earlier this month, gets opportunity to be with newborn twins through program 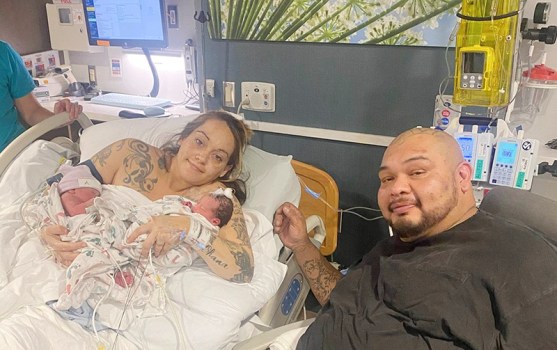 Victoria Lopez and her fiance, Daniel Irlas, smile for a photo after their twin girls Lylah and Willow were born earlier this month and moments before they were transported to the Mankato newborn intensive care unit. At the point this photo was taken, Lopez said she didn’t think she would see the girls again for a long time, until she received a call telling her she was eligible to participate in the Healthy Start program. Provided 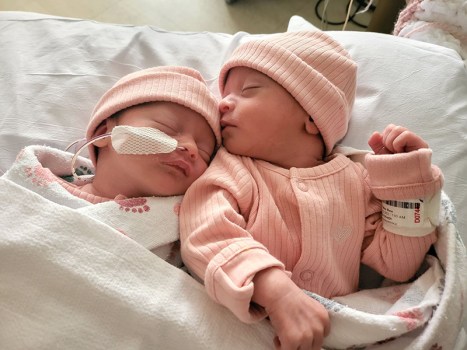 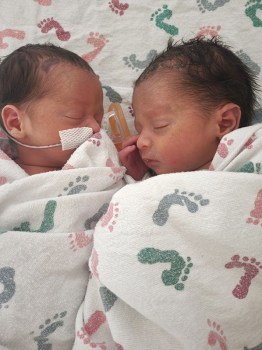 The twin girls have been in the Mankato newborn intensive care unit since they were born but are making steady progress. Provided

After giving birth earlier this month to her twin girls six weeks early, Victoria Lopez’s heart broke as she handed her babies over to a team to take them to the newborn intensive care unit in Mankato.

“I didn’t think I’d see them again for a long time,” said Lopez, who was sentenced the day prior in Freeborn County District Court to seven years and four months in prison for selling methamphetamine to an informant two years before.

Lopez had been in the Freeborn County jail when she started to go into pre-term labor the night of the sentencing and was rushed to the emergency room at Mayo Clinic Health System in Albert Lea and then taken to the hospital in Austin, where she ultimately delivered the babies.

She said she didn’t think she would get to see her babies again before she had to report to prison until she received a phone call from the head programmer at the Shakopee prison.

The programmer explained to her that there was a new law implemented in Minnesota in 2021 called the Healthy Start Act, which allows the Commissioner of Corrections the authority to conditionally release incarcerated mothers who are pregnant or within eight months post-delivery from prison to the community to engage in work, vocational training, substance abuse or mental health treatment, education or parenting education. The program may last the duration of the pregnancy and up to 1 year of the newborn child’s life.

The woman told her she had heard about her case and the hard work she had put into improving her life since her arrest in 2020.

“She said, ‘You fit all the criteria for a program we have … you work, you go to school … you’ve been sober for two years … you’ve hit every mark,’” Lopez said the programmer told her.

So she asked Lopez if she would like to enroll in the program, which would allow her to stay with her babies and out of prison — but under strict supervision. Part of that supervision includes wearing a GPS monitor and completing weekly check-ins.

“Their main goal is to keep moms with their babies,” Lopez said.

Under the program, Lopez will undergo a hearing every 45 days — what she compared to a parole hearing — where the review team will decide if she is still doing the things she needs to and whether she is continuing to move forward.

“It’s all been a blessing,” she said. “It was really hard on my family — my whole family was in the courtroom that day.”

She said because of how well she had done in turning her life around since her arrest, they all had thought the judge would depart from the state sentencing guidelines and that she would serve her sentence on probation instead of in prison.

She said she knew after her arrest that she needed to change after seeing the hurt she was causing her now 17-year-old daughter and the rest of her family. She had previously been convicted of two second-degree sales charges in 2011.

“(My daughter) said, ‘Mom, I can’t do this anymore,’” Lopez said. “I wanted to do her better. I had let my addiction get the better of me. I wanted to stop hurting the people around me. I want to give back to my community.”

So she went on to attend and graduate from treatment at Fountain Centers, has worked full time at a gas station in Albert Lea, being able to provide financially for her family, and has started attending Riverland Community College with the hopes of going into psychology and someday be a counselor for youth addicts.

She is engaged to be married to her fiance, Daniel, and has a 1-year-old son, Arturo, and three more children in their family through her fiance.

After how hard she said she had worked to straighten out her life, it was devastating when the sentence came that she would be sent to prison.

“When I got sentenced, it was like, ‘What else could I have done in my life?’” she said. “How could it not have been enough?”

The stress of the sentencing sent her into labor, and at 6:30 p.m. that night in the Freeborn County jail she said started bleeding and was rushed to the emergency room at Mayo Clinic Health System in Albert Lea. From there, she was transported to the hospital in Austin, where she delivered her babies, Lylah Lorraine and Willow Rose, the next day.

“When I had to hand my daughters over to transport, it was probably the most heartbreaking thing I’ve ever had to do,” Lopez said.

One of the infants weighed 4 pounds 3 ounces and the other weighed 5 pounds 6 ounces. Though they initially had some respiratory problems and are still on a feeding tube, they have made steady progress in the about 2 1/2 weeks since their birth.

Lopez said she has been at the hospital around the clock, often sleeping in a chair in their room.

“As devastating as it was on the second of November, it turned out to be quite a blessing,” she said of having the opportunity to be there for her daughters and participate in the program.

In addition to the requirements that Lopez has to fulfill, the program assigned her a doula through the nonprofit Ostara Initiative, who also is available to provide support.

Nicholas Kimball, director of communications and community engagement for the Minnesota Department of Corrections, said six people have been approved for the Healthy Start program since its inception. He noted there is a public safety review that is conducted after someone is deemed eligible.

A report to the Legislature in April said the eligibility criteria are aligned with recommendations from child development experts on attachment and bonding needs for infants.

“Babies need to be bonded with an ongoing primary caregiver,” it stated.

“The first year of life is a critical time for mothers and babies to bond. …” the report continued. “The separation is stressful for both the child and the mother. Even short periods of parental incarceration cause profound disruption to a child’s life, particularly in infancy, and can have long-term ramifications.”

Lopez said she will be forever grateful for the opportunity she has through the Healthy Start Act to be with her children.

“I have a good heart, strong ambitions and a strong will to keep moving forward,” she said. “I’m grateful for the chance I have to prove myself that this isn’t just a phase.”

Though the program is presently for one year, she said she hopes to prove that it would be beneficial to continue past that time frame.

“It all depends on the work I do and whether or not the prison board approves,” Lopez said. “But the goal is to continue on past the year and show the value it has to leave stable parents with their children.”