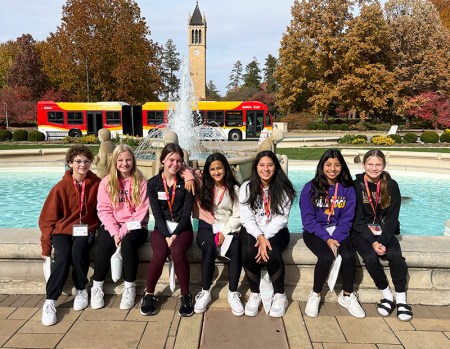 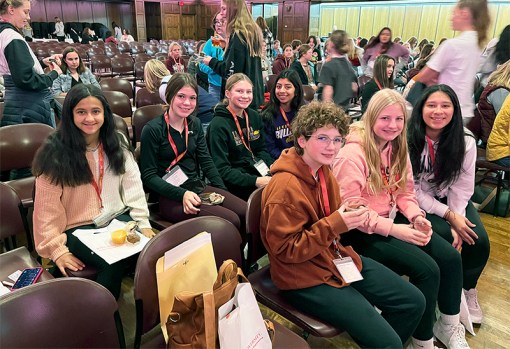 Marie Menke, teacher leadership compensation technology coach and K-12 talented and gifted coordinator for the district, runs enrichment programs throughout the district and said she took seven students to Iowa State for a conference that was called “Go Further.”

“It was put on by the Iowa State Program for Women in Science and Engineering, and so it was all about showing females all of the different job opportunities or career opportunities that are available to women … [and] just showing girls that they can do great things.”

The conference, open only to eighth-grade girls, was designed to empower others, help them persevere through obstacles and encourage them to be leaders. To that effect, the program allowed girls to explore different science, technology, engineering and mathematics subjects, including aerospace and glass blowing.

Before students broke off for different sessions they could attend, they listened to keynote speakers Katrina Williams, a teacher in Ames, and LeQuetia Ancar, director of multicultural student success at Iowa State.

The girls then were able to choose from different sessions, which included a Lego-building one.

“They were practicing being an engineer, and they were given a problem and they had to try to solve the problem building something with Legos,” she said.

Another session, Be the Predator, asked students to find ways to avoid the spread of diseases.

There was a session on aerospace, where they learned how to put together 3-D printed airplanes and discussed the different parts of the plane and what the purposes of those parts served. Another session involved the use of magnets. And then there was one with food.

“The one that a lot of the kids did go to in the afternoon, it was the very last one, it was called ‘The Phases of Chocolate,’ and so they got to learn how chocolate was made,” she said. “They also got to taste some different kinds of chocolate at the very end. And that was one of their favorites.”

Menke’s goal was to show the girls there were lots of different job opportunities for people with a math, science or technology-related interest.

“Sometimes if somebody says they’re interested in science you gear towards the medical field where there’s so many other opportunities that you can explore,” she said. “Sometimes kids are just unaware of all of the options that are available to them.”

In a recorded video after the conference, student Josephine Islas said she enjoyed making model airplanes with 3-D printed pieces, while fellow student Laylah Ingledue said she enjoyed playing a game and analyzing data during the “Be the Predator” session.

“I learned I can have fun while also doing science,” Lily Young said.

Menke herself was excited to see students get excited and hoped to bring opportunities these students had to the classroom.

“Overall the girls had a great time,” she said.

Students who attended were nominated by either Ranen Spies — the eighth-grade science teacher — or herself.

This was the second time Menke took girls to the conference. Previously, she went with girls to a conference in 2019. Iowa State discontinued the program during the pandemic.

“I’ve enjoyed it, the students have enjoyed it, and so it’s just been something that I was excited to share with more kids,” she said.

She plans to attend the same conference next year with a new batch of eighth graders.