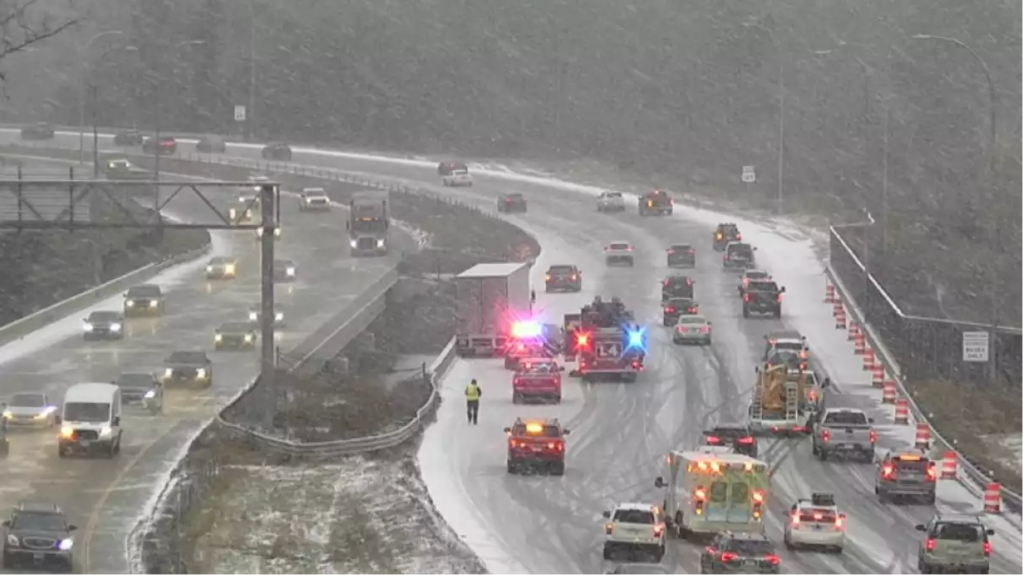 Emergency crews respond to a crash involving a car and semi on snow-covered U.S. Highway 169 south of Interstate 494 in Bloomington on Monday. Minnesota Department of Transportation

While it was a headache for many drivers and pedestrians, the snow also was a welcome sight for Minnesotans eager to get out skiing, snowboarding, snowmobiling and pursuing other winter pursuits.

In addition to the 322 crashes, authorities also reported 67 spinouts and three jackknifed semis between 6 a.m. and 11 a.m., just on state highways — not counting county and city roads.

The Patrol said 25 of the crashes involved injuries, but no serious injuries or fatalities were reported.

Among the many crashes, authorities reported a car went off Interstate 94 and ended up in the Buffalo River east of Moorhead at about 7:30 a.m. Monday. No injuries were reported.

And a driver suffered minor injuries when their car slid underneath a semi trailer along U.S. Highway 169 in Bloomington, just south of Interstate 494.

Monday morning’s snow brought the first widespread snowy morning commute of the season across the state. The Minnesota Department of Transportation’s traffic maps lit up with numerous reports of crashes, spinouts and significant travel delays in the Twin Cities and elsewhere around the state.

Metro Transit in the Twin Cities reported as many as 60 percent of its bus routes were delayed at times on Monday morning.

Difficult driving conditions continued around the region as snow continued to fall as of midday. MnDOT said it had hundreds of plows out on the roads, in addition to local and county crews.

The ongoing snow may make for a difficult afternoon commute as well. The Patrol urged drivers to slow down, turn on their headlights, and turn off cruise control as they travel in the snow.

A winter weather advisory is in effect until 6 p.m. Monday from south-central Minnesota northeast through the Twin Cities and into western Wisconsin. Total snowfall of 2 to 4 inches is expected.

Winter weather advisories and winter storm warnings also are in effect through Tuesday evening for Lake and Cook counties in northeast Minnesota, where some locations along the North Shore may see more than a foot of snow.

Whether it’s a couple inches or a foot, the snow will be a welcome addition to the manmade snow already coating ski hills and trails around Minnesota. After near-record warmth in parts of Minnesota last week, a drop in temperatures over the week allowed for good snowmaking over the weekend.

Before Monday’s snow, Duluth had seen about 6 inches of snow this season — though just 0.9 inches this month, about 4 inches below normal.

Going into Monday the Twin Cities had seen less than a half-inch of snow this season — more than 2 inches below normal.

More light snow is in the forecast in the coming days; find forecast updates on MPR Weather’s Updraft blog.