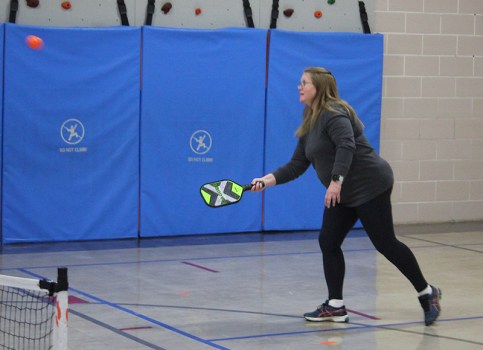 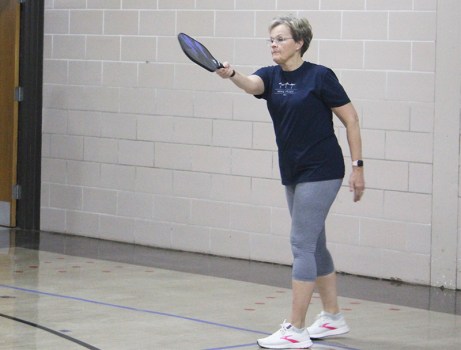 The sound of plastic balls bouncing off the gym floor could be heard Tuesday night at Lakeview Elementary School.

Thanks to Albert Lea Community Education, pickleball enthusiasts now have another opportunity to play indoors.

Pickleball first started in Albert Lea in 2014 when a group worked to convert the outdoor tennis courts by the city pool, and Albert Lea Community Ed began partnering for classes six years ago.

And the group wanted to continue playing after the weather cooled.

“Community Education was also one of the partners with Blue Zones in our community knowing that it’s a fun activity, it’s a very social activity and it’s an active activity,” Double said.

He said pickleball is also low-cost, and the pickleball group provided equipment, so it did not require a large investment from Community Education.

Double thought the rise in the sport’s popularity was because it provided an economic way to stay active. He also said because the game was played on a smaller court — roughly the same space as a badminton one — it made it easier for older players to move around.

“We may still love that game [tennis],” he said. “And being able to play it on a quarter-sized court, and something very similar, I think, has a lot of appeal.”

Almost every indoor class for the fall session Community Education offered was full.

“I think if it were only an outdoor sport people would still be excited about it, but I think once they end up enjoying it, and really enjoying it, they ask’ ‘How do I do this in the winter when there’s snow?”

Having it indoors helped people who were looking to stay active moving and didn’t require a big time commitment.

Double himself used to teach the game as a physical education teacher, though he admitted he had limited experience with it.

“I enjoy it,” he said. “I liked playing tennis when I was a lot more mobile, and to be able to play something that has those same tennis skills and that enjoyment piece but on a smaller court was appealing to me.”

Double said pickleball was one of the fastest-growing sports in the country and that its popularity was growing internationally.

“I think it’s great that this community group brought it, or helped get it started, here in Albert Lea and that Community Ed can help be a part of helping keep it going in the winter months for the population of our community who really enjoys it,” he said.

Laura McKibbin, who started playing in the spring, was at Lakeview Tuesday evening playing.

“I just kept hearing about it and it looked like fun, and I wanted something that was a good sport for somebody [my age],” she said.

So far, she loved the game.

“I played when it was outside, and then when it moved inside this fall I wanted to play again,” she said. “I love it.”

She also enjoyed the group of pickleball players she was with and said they welcomed everyone of all skill levels.

Michele Johnson started playing this spring as a work activity.

“I like it a lot more than I was expecting,” she said.

To sign up, contact Community Education at 507-379-5318 or register online. There are currently five classes offered, including three all skill classes, one class for beginners and another for advanced players.

The current session meets Monday to Wednesday through Nov. 30.

Double said Tuesday’s numbers — the first for a new session following one in October — were “really good.” There were nine participants in the beginners class, 59 in the all-skills classes and five in the advanced level play class.

There will be another session in December.