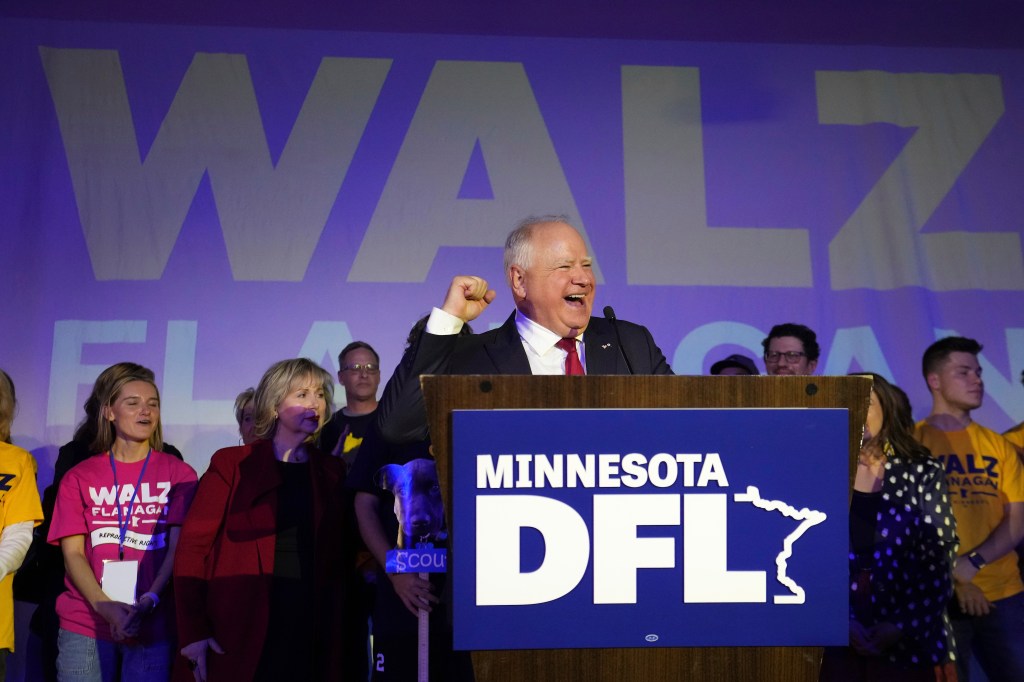 ST. PAUL — Minnesota Democrats defied expectations in a midterm election that had been expected to go well for Republicans, winning the governor’s race and completing a trifecta Wednesday by winning both houses of the Legislature to take full control of state government for the first time in eight years.

“A Minnesota Senate miracle,” outgoing Democratic Minority Leader Melisa Lopez Franzen proclaimed at a news conference. She acknowledged later: “We didn’t think this would happen, and it happened.”

While some legislative races were yet to be called as of Wednesday, Democrats exceeded the 68 seats they needed to preserve their majority in the House. And they appeared to have the 34 seats they need to control the Senate.

The only other time that Minnesota saw single-party control in the past 30 years was when Democrats held full power in 2013-14, and the last time any Minnesota Republican won statewide office was in 2006, when Gov. Tim Pawlenty was reelected.

Democrats were short on specifics Wednesday on what they might do on policy changes they could not get through the Senate under Republican control. They said they’ll start working on that at an organizational meeting Thursday.

But they mentioned codifying abortion rights, which are currently protected by a 1995 Minnesota Supreme Court ruling, to protect them from future legal challenges. Other possibilities include paid family leave, legalizing recreational marijuana, more education funding and even a full exemption of Social Security from income taxes, a top GOP priority embraced by some Democratic candidates.

Walz was still digesting the Democratic triumph, too. He acknowledged at a news conference that he expected to win his race but thought there was only an “outside chance” of hitting the trifecta.

The governor was also short on details for his own agenda for the 2023 session but said it could look a lot like the budget plan he offered at start of this year’s session. And he said he’ll push to revive his proposal for tax rebate checks of $1,000 for individuals and $2,000 for joint filers.

The state’s budget surplus was projected at $9.25 billion as of the last detailed forecast in February. Lawmakers were unable to agree on how to spend or return about $7 billion of that, so it’s still sitting in the bank, and revenues have been running nearly $300 million ahead of projections.

“Minnesota state finances are in as solid a position as maybe they’ve ever been, and we are sitting on one of the largest surpluses per capita of anyplace in the country,” Walz said. “That gives us an opportunity to do those things — make communities safe, invest in people to make sure reduce the pains of inflation, invest in education.”

Republicans, meanwhile, were coming to terms with their losses.

“Tim Walz is the governor for four more years,” GOP challenger Scott Jensen told supporters in a concession speech. “Republicans, quite frankly, we didn’t have a red wave. It was a blue wave. And we need to stop, we need to recalibrate, we need to ask ourselves: ‘OK, what can we learn from this? What can we do better? How do we go forward?’ ”

Amy Koch, a former Republican Senate majority leader turned political strategist, said weakness at the top of the GOP ticket and and the party’s alienation of women were major factors in the Democratic sweep.

“We should have wiped the floor with the DFL. We didn’t. We lost,” Koch said in an interview.

She said a stronger showing by Jensen could have lifted other statewide Republicans. And she said she heard from many women, and many Republicans, angry over comments by Jensen running mate Matt Birk against abortion rights and women having careers, including accusing abortion rights supporters of playing the “rape card” by demanding exceptions to abortion bans for rape and incest.

Many women responded by quietly going to the polls and voting for Democrats, she said, and “that’s why everybody is in shock this morning.”