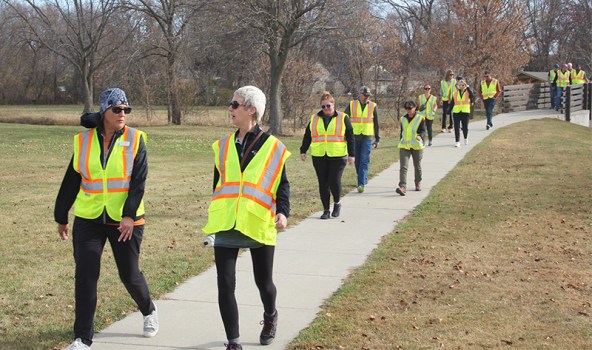 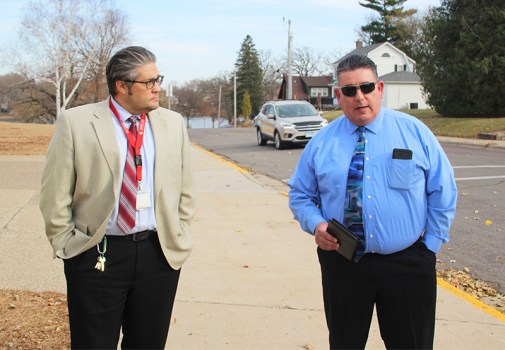 Nick Sofio and John Double talk about what opportunities a proposed trail could bring for students. Alex Guerrero/Albert Lea Tribune 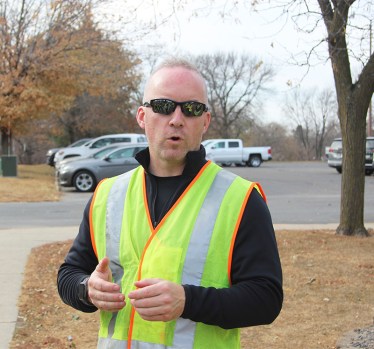 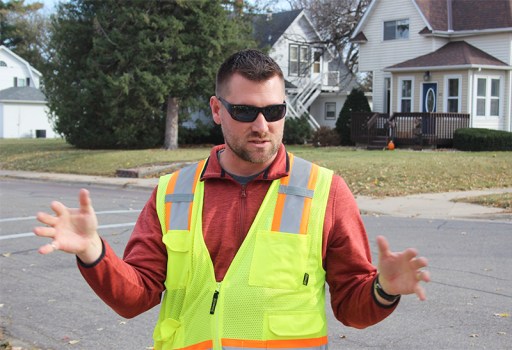 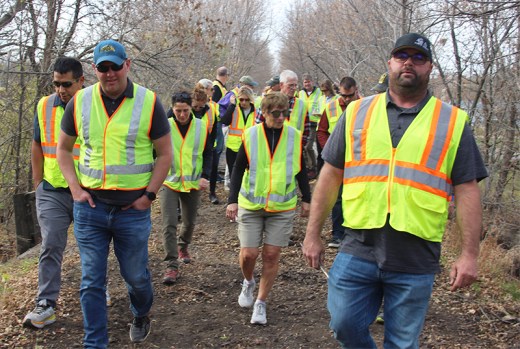 The goal of the walk is to help a planning team look at the potential for developing a trail. Alex Guerreor/Albert Lea Tribune

“We have our consultants here from the Minnesota Department of Transportation to help us look at the potential for developing a trail for bicyclists, walkers, families with strollers, maybe even an ATV portion along the former Union Pacific rail corridor that runs from the south part of Albert Lea all the way up to the small town of Hartland in Freeborn County,” Malakowsky said.

The potential trail would connect the southern part of Albert Lea to amenities including Shoff Park and downtown. The proposed trail would provide families an alternate way to get to Lakeview Elementary, and bikers could take the bike lane from Front Street to Blazing Star Trail and ultimately to Myre-Big Island State Park.

Nick Sofio, principal at Lakeview Elementary, greeted the group outside the building as they arrived.

Sofio said crossing Fountain Street was a barricade due to traffic and said it was particularly challenging when new families come to the district with first graders or kindergartners and question how they are going to get there safely.

Currently, the only place there is school patrol is on Abbott Street.

Sofio suggested there be something like “a flashing light” to bring attention to drivers, especially in the morning and the end of the school day as students cross.

“One of the unique aspects of that intersection is that it’s offset, and that creates the perfect storm for distracted drivers and poor visibility,” Wacholz said. “They’re trying to negotiate one turn, and then there’d be a crosswalk at one of the two or in-between. It’s just a very dangerous orientation.”

Speeding was not the issue, though school speed limits were only enforceable in the presence of children and tended to be ignored when school wasn’t in session.

Deputy Police Chief Darren Hanson said school speed zones could be part of the solution, but he said it was hard to enforce as 8 a.m. and 3 p.m. are some of the department’s busiest times.

“We’d like to be in the areas of the schools during those busy times, but we get called away to other things,” he said. “You almost needed dedicated staff to work for that, so I think the solution lies in engineering to a point. But then what else can we do to supplement that, whether it’s flashing crosswalks or crossing guards or something to get the drivers’ attention.”

Sofio said the school was also working to find walking buddies for younger students who walked to the building independently.

“Sometimes that works out really well, sometimes that doesn’t work out,” he said. “But we try our best [to connect younger students with older students].”

He said a trail would be helpful in that it would be a safe, paved way for students to get to school. And he thought a trail could provide nature opportunities for students in science and social studies classes.

He asked if the trail would attract non-community members and strangers.

“That’s what we’re sorting out because we heard a lot of different viewpoints today,” Malakowsky said.  “We heard from avid bicyclists who just want an open trail, they want miles, they just want to go.

“I heard from people who were saying “No, I like that families could ride into town and take it to downtown or to your school or to a park.’”

A resident asked if a bridge could be used to get people across Fountain Street from Summer Avenue, and both Wacholz and Jahnke admitted it was a possibility, but it would be very expensive to implement and the decision would be up to the Freeborn County trail planning team. Another option was a median island. A high-intensity activated crosswalk signal was also being considered for a school crossing. HAWK signals stop vehicular traffic only when needed.

John Double, executive director of Albert Lea Community Education, speculated a number of programs could come out of a trail.

Wednesday morning another group rode from City Garage along Madison Avenue northwest while trying to stay as close to the rail corridor as possible. That night there was a mapping charrette at Edgewater Bay Pavilion, where participants looked at maps to examine solutions to potential challenges in developing the trail.

Cost of the project was unknown, but they want to develop a plan with cost estimates and apply for grant funding at federal, state and private programs specifically for outdoor agriculture and recreation and trail systems.

Malakowsky acknowledged the wastewater treatment plant is more important, but said the grants she’ll apply for are designed specifically for outdoor recreation and trails. It’s her hope the project could attract more people to Albert Lea.

The rail corridor continues north of Albert Lea to Hartland.