Shea to be next Freeborn County sheriff 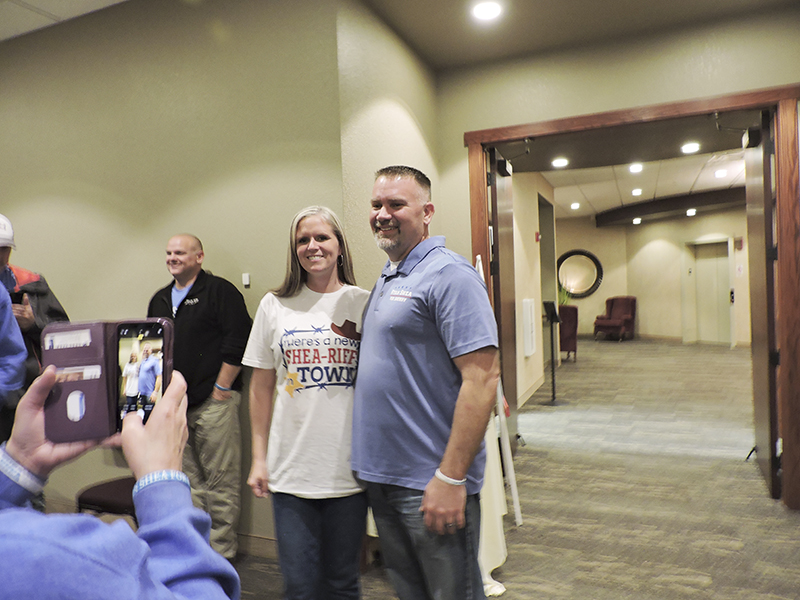 Jolean Shea poses for pictures in her shirt — which bears the phrase, "There's a new Shea-riff in town" — with her with her husband, Ryan Shea, following his win for the position of Freeborn County sheriff. Kelly Wassenberg/Albert Lea Tribune

‘I know it’s time to put in more work,’ he says

Freeborn County Sheriff’s Office Detective Ryan Shea won the election for the position of the next Freeborn County sheriff over Albert Lea Police Lt. Jeff Strom by a margin of less than 500.

Shea received the news Tuesday evening at Wedgewood Cove, where he was surrounded by dozens of supporters.

The win came as a little bit of a disbelief for Shea, who admitted asking himself if the moment was really happening.

“But now I know it’s time to put in more work,” Shea said.

More work because the campaign itself was not easy.

Shea said Strom is well known in the community and has been for years, so he didn’t doubt it would be a tough campaign, especially considering how close the two already were in the primary. Only 125 votes separated the duo in the contest, and Strom won that round.

One of the most pressing issues Shea said he would need to contend with is staffing issues in the department.

If he needs assistance, Shea can find it in his former opponent. Strom called Shea after the results were announced.

“I was disappointed, but I called up Shea and congratulated him,” Strom said, adding that he assured Shea that he will have his full support.

With the election behind them, Strom and Shea both expressed their appreciation for those who’ve helped them along the way.

“I thank all those who voted for me and helped with my campaign,” Strom said, making special mention of his wife, Andrea. “I appreciate the support and will still do the best job I can for the Albert Lea Police Department.”

“I’ve been so blessed with fantastic family and friends that have supported me the whole way and been there with me,” Shea said of his own campaign team. “It’s great to be surrounded by them, and to know that people are trusting in me, counting on me and believing in me.”

Shea will assume his new role as Sheriff in January.

In the meantime, Shea said, “We’ll wake up in the morning and think about what we need to do next.