Students ‘filled with pride’ to recognize veterans in program 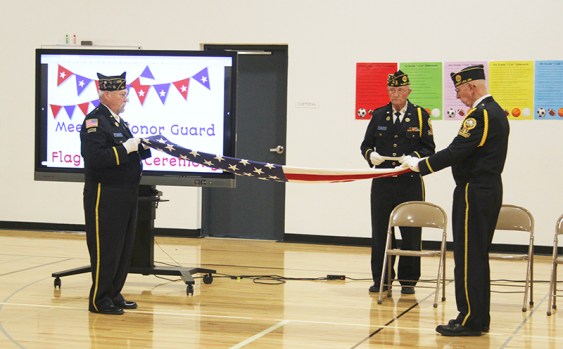 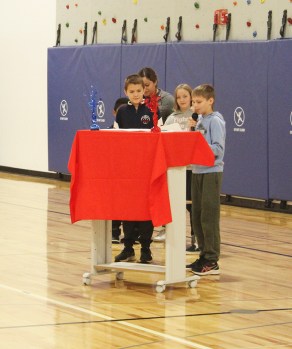 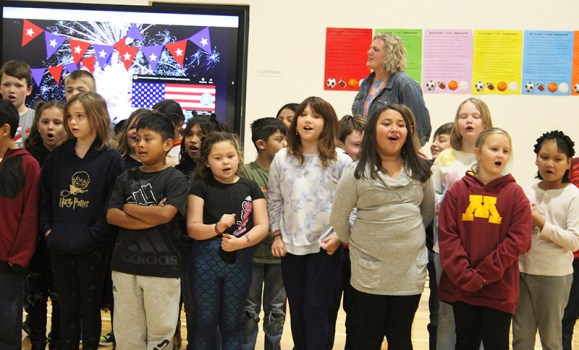 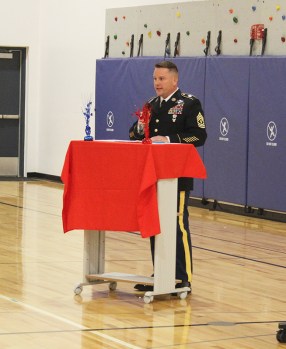 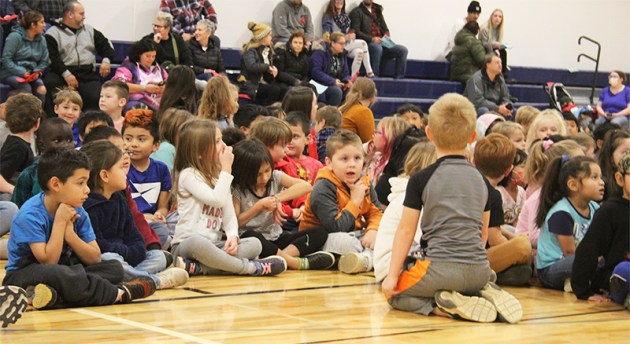 Even though the Albert Lea school district has had veterans appreciation programs in the past, this was the first time Tonya Franks, principal at Halverson Elementary, led a program presented by students and staff.

This is her fifth year as principal at Halverson, and she saw the event as a way to bridge the generation gap.

“It was important to do the veterans appreciation program so that we could help our students understand the sacrifices veterans have made to serve our country and protect our freedoms,” she said. “Not having done one before, I thought this was a good opportunity to tie in things that we learn in our social studies standards, in our language arts standards and music and art and celebrate our veterans.”

The guest speaker was 1st Sgt. David Enser, who served for 22 years with the Minnesota National Guard.

He started his presentation talking about Armistice Day, which began with an agreement to end four years of fighting in what was World War I. And in 1954 the day was changed to honor all veterans who served.

Enser said it was hard to define what the day meant, but for him it meant a “blanket of honor” for people who made commitments to serve.

“When it comes to gratitude, I cannot express enough gratitude,” he said.

He also thanked veterans who had to carry invisible scars.

“Students were filled with pride as they had the opportunity to participate in our program today,” she said. “Halverson staff and students would like to express their sincere thanks to Post 56 for their participation, 1st. Sgt. Enser as well as extending our appreciation to all veterans who have committed to serving our country and defending our freedom.”

The celebration started with a presentation by the American Legion Honor Guard, recitation of the Pledge of Allegiance and singing of “The Star-Spangled Banner,” and members of the American Legion Post 56 Honor Guard folded an American flag. The folding was led by Navy veteran Lowell Peterson, who spent 21 years in service.

The first fold of the flag is a symbol of life, the second is a symbol of belief in eternal life, the third a remembrance of veterans who gave “a portion of their life” in defense of the country, the fourth a recognition of the nature of the country’s citizens to trust in God, the fifth a tribute to the country, the sixth symbolizes where hearts lie in keeping with the Pledge of Allegiance, the seventh a tribute to armed services, the eighth a tribute to those who died, the ninth to womanhood, the 10th to fathers, the 11th represents the lower portion of the seal of King David and King Solomon to glorify, in Judaism, the God of Abraham, Isaac and Jacob, the 12th an emblem of eternity to glorify, in the eyes of Christians, the Holy Trinity, and the final fold signifying the national motto of, “In God We Trust.”

Students also watched a video to the tune of the “Armed Forces Medley.”

“I was extremely excited to see Halverson students and staff pull together a veterans appreciation program for our students and community,” Franks said.

Superintendent Ron Wagner was also at the Halverson celebration.

“I think this is an incredible opportunity to celebrate our veterans,” he said. “Principal Franks and staff and students did an amazing job representing and supporting those who have served, so it was a great opportunity to recognize [them].”

Veterans appreciation programs were also scheduled to take place in the afternoon at Sibley and Lakeview elementary schools.