Tale as old as time coming to high school stage 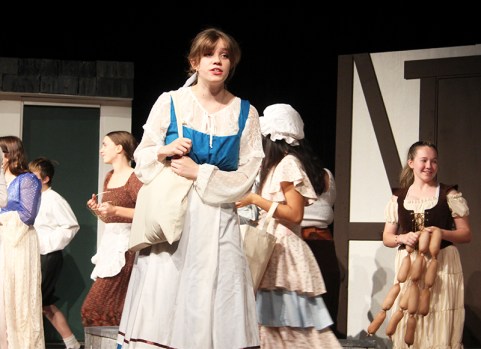 Ava Cunningham walks across the stage as Belle during a dress rehearsal Thursday afternoon of "Beauty and the Beast" at Albert Lea High School. Performances of the musical begin Thursday. Alex Guerrero/Albert Lea Tribune 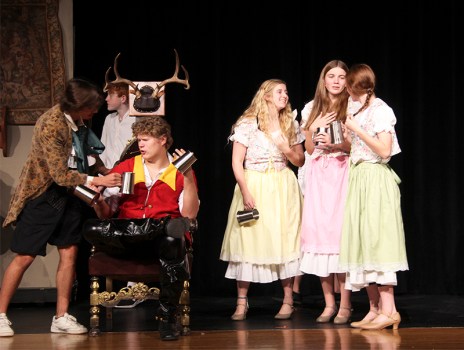 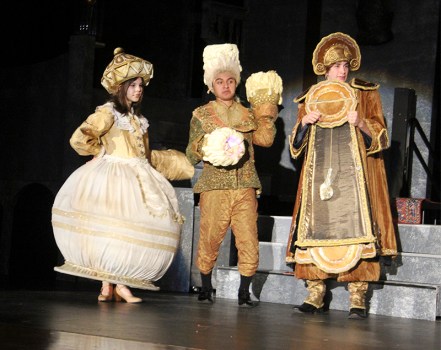 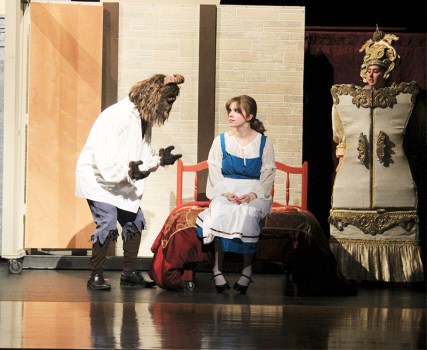 Yoon, left, as Beast tries to convince Cunningham, middle, as Belle to come out of her room for dinner. Alex Guerrero/Albert Lea Tribune

‘Beauty and the Beast’ features over 60 students

After a couple months of preparation, the stage is set for “Beauty and the Beast,” Albert Lea High School’s fall musical.

Diane Heaney, ninth- to 12th-grade vocal music teacher, director and musical director for the show, described it as a “big show.” This will be her 29th year working on the musical.

“We haven’t done a Disney show for a long time, and I just knew I had the kids that could pull this off,” she said. “It’s a big singing show.”

She also felt she had a great group of seniors who would do well in a bigger show to finish their time at school.

Auditions were before Labor Day, and rehearsals started right after auditions. Including stage and tech crews, there are over 60 students involved in the production. And Heaney wanted a big cast.

She described the music of the show as “lush and gorgeous” and said it was a “grand production.”

The biggest challenge she has faced was working with student schedules, and said the students did as much as they could. She also admitted technical aspects of the production were tough.

On the other hand, she admitted working with this year’s seniors was easy.

But her favorite part of doing musicals was watching students become performers.

Ava Cunningham and Joseph Yoon will play the title  roles of Belle and Beast.

This will be senior Angel Hernandez’s third show. Hernandez, who plays Lumiere, was involved in “Mamma Mia!” and “A Year with Frog and Toad.”

Hernandez, who is considering a career as an actor, wants to be involved in music and musicals after graduation.

He described Lumiere as a “very flirtatious” French servant in the castle who “got all the girls it seems.”

Fellow senior Kailey Boettcher plays one of the three silly girls who — along with Jaya Stout and Evie Dawson — runs around fantasizing about Gaston, follows him everywhere he goes and fights with Stout and Dawson to win him over.

Boettcher has been involved with fall musicals since eighth grade and has been in “Freaky Friday” and “The Addams Family” to name a couple.

Ninth-grader Bella Navarrete is part of the chorus and decided to audition because she felt the experience would help her meet new people and gain new experiences.

This is Navarrete’s first musical, though she performed “Beauty and the Beast” in fourth grade with Prairie Fire Children’s Theatre.

The show also marks the end of Heaney’s time as director, as she plans to retire at the end of the school year. She will not do a spring play, though she didn’t know if the school planned to do one.

“It’s time for me personally,” she said. “Of course it’s bittersweet because I love doing musicals. It’s one of my favorite things.”

Her interest in musicals started at a young age when her mother, who served as a drama director at a high school, took her to school practices.

“I’ve always wanted to be on stage, and then as I grew into the teacher role, of course then I assumed the director business,” she said.

Heaney has been at the school for 30 years, and her favorite part about doing shows was the memories they created.

“When I look up and see that they are bitten by this performance bug, that’s what makes it all worth it,” she said.

To that effect, Heaney said there were students she worked with at school who went on to perform after graduation.

Hernandez described Heaney as “an awesome, committed teacher,” while Boettcher said it was “amazing” to work with her.

Navarrete said Heaney made it easy for her to be herself.

“I’ve grown a lot as a person and as a singer because of her and I’d like to give her credit for that,” she said. “She’s been a great supporter in my singing career.”

“Beauty and the Beast” will run 7 p.m. Thursday through Saturday at the high school. Tickets are $6 for students and seniors and $8 for adults and are available at alschools.org/tickets. They will also be sold at the door.

“I know they are going quickly,” Heaney said.