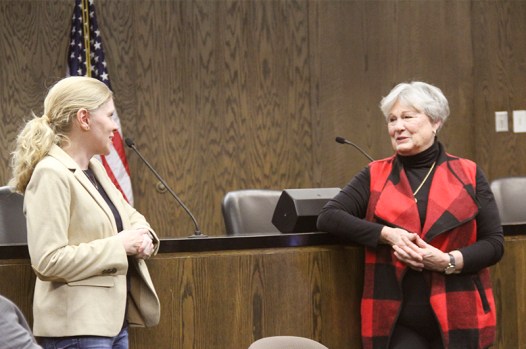 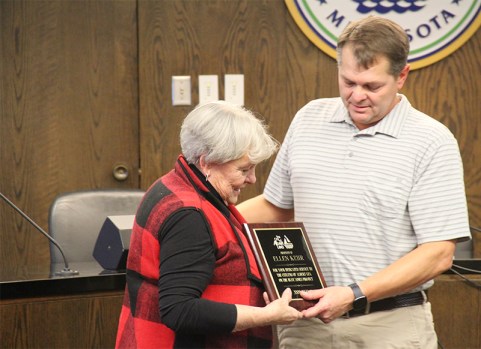 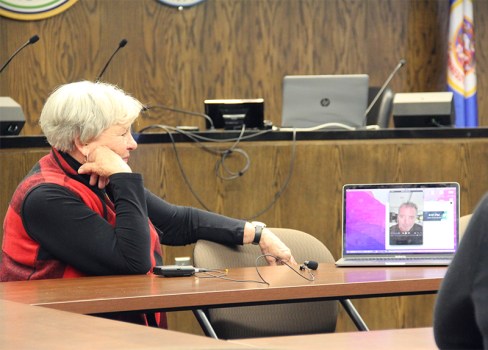 Kehr watches a video with Dan Buettner thanking her for her time with the Blue Zones Project and recognizing her dedication. Sarah Stultz/Albert Lea Tribune

An Albert Lea woman who helped to usher in positive long-lasting changes to the community as the organization lead for the Blue Zones Project retired on Tuesday — though she’ll be quick to tell you she’s not done with the effort.

Ellen Kehr has been a part of the Blue Zones Project for 13 years since it first came to Albert Lea as a pilot program. The goal at that time was to test if a city could implement the principles that National Geographic Explorer Dan Buettner found in the people who lived the  longest around the world.

Albert Lea Mayor Vern Rasmussen Jr. said the first year was unbelievable for the community with the publicity the community received and the things that were done as part of the project.

As time went on, Rasmussen said city leaders wondered how they would keep the project going, but lucky for them, he said they found a champion in Kehr.

“I don’t know if it would have kept going, but I’m glad it did keep going because it is part of the fabric of our community now,” the mayor said as he presented Kehr with a plaque during a ceremony with the Blue Zones Project leadership team and others who have worked with Kehr over the years. “For us as a council it’s kind of intertwined into all of the decisions we make and all the policies we make … It’s been a great program for us as a community.”

Under the Blue Zones Project philosophies, the downtown was revitalized, South Broadway was redesigned, bike lanes were installed and many miles of new sidewalks and shared user paths have been installed. There has also been a lot of work done in the schools and in the various worksites and also in reducing tobacco use in the community, among other initiatives.

Several in attendance spoke of how they have been inspired by Kehr’s dedication and energy over the years and for the mentor she has been for them.

Kim Nelson, who is on the leadership team, said she first met Kehr when she worked at The Children’s Center and Kehr became her mentor in many aspects of her life.

“You will forever be part of this program,” Nelson said.

Public Health Director Sue Yost, who has known Kehr for at least 20 years, said she was proud to have witnessed all the changes Kehr helped bring to the community.

“I just can’t believe all the stuff you’ve had your hands in and managed to accomplish,” Yost said.

Lana Howe, Statewide Health Improvement Program coordinator for Freeborn County, said Kehr and her husband helped drive her to want to go into community health and that Randy Kehr helped her get her first job.

Jen Furler, vice president of the Blue Zones Project by Sharecare, said Kehr is beloved across the country and that in addition to her role in Albert Lea, she has been a trainer, mentor and leader for countless other colleagues and communities as the project has launched across the country. She said the project is now in 75 cities and growing.

Furler said she met Kehr more than 10 years ago when on the Iowa state team that was trying to replicate what took place in Albert Lea. Kehr at that time was chosen to lead the effort in Mason City.

She said Kehr has inspired many.

“Ellen, you are a Blue Zones Project legend,” added Amelia Clabots, vice president of finance and operations at Blue Zones.

“It’s not an understatement to say that the 75 communities that we’re in today are here because of Albert Lea and because of Ellen and Randy. … What an amazing thing that you have helped create across the United States for everybody’s well-being.”

Clabots played a message from Blue Zones founder Dan Buettner, who was unable to attend.

He said he would never forget the day he launched the Blue Zones Project to Albert Lea leaders.

“Your husband, Randy, after a long silence, said, ‘We need this,’” Buettner said. “And he, probably more than anybody else, launched a movement — certainly in Albert Lea. … It’s something I’ve never forgotten.”

He thanked Kehr for her friendship and described her as a warrior, believer and evangelist who took the principles she has seen work around the world and put them to work in the United States.

“I really can’t thank you enough — not only for your work but also your support,” Buettner said.

His brother, Nick Buettner, said when he started with Blue Zones, his brother told him about the Kehrs. He applauded Kehr for her work in the community, in Iowa and across the world.

“You’ve been their mentor,” he said. “You have taken the work that you’ve done here and have been able to expand it across the country, and really allow people with your lessons to change communities. I would argue you have impacted millions of lives.”

The Blue Zones Project is donating a bench in honor of both Randy and Ellen Kehr along the Blue Zones Walkway.

Ellen Kehr thanked everyone in attendance and said it has been “the career of a lifetime.”

“I would have never, ever imagined that I could have this career,” she said, noting she wished everyone had the opportunity to end up with a career that really fits them.

“This one fits me,” she said. “And you all helped me have this career.”

She said she doesn’t think the community knows the hours put in by the leadership team in Albert Lea.

“Don’t ever think that a small group of dedicated and committed people can’t change the world because you can and you did,” she said.

Kehr said she has no doubt that the project is sustainable and will continue forward after she steps down as the leader. Many policies at the city and even school levels have been impacted by the project.

She said she is proud of the way Albert Lea’s physical environment has changed and noted that every major transportation corridor in Albert Lea now includes pathways for people walking or riding bikes. Paths to school are also better connected for students. She noted that research has shown that the community is 40% more active than it was before the Blue Zones Project came to town.

Kehr said she hopes community members are proud of the changes the community has made and the example it can be to the world.

“Not everyone has the opportunity to change so many lives,” she said. She noted she is contacted often from other communities that are looking to implement the same project there.

“The Blue Zones Project has become the gold standard,” she said.

With Kehr’s retirement, the Blue Zones Project effort in Albert Lea will now be headed up by Cathy Malakowsky, director of community engagement and enrichment for the city of Albert Lea.

Kehr said she will remain on the leadership team and hopes to help people in the community find their purpose through purpose workshops.