After multiple flight delays and cancellations, couple finally back home 4 days later after taking matters into own hands 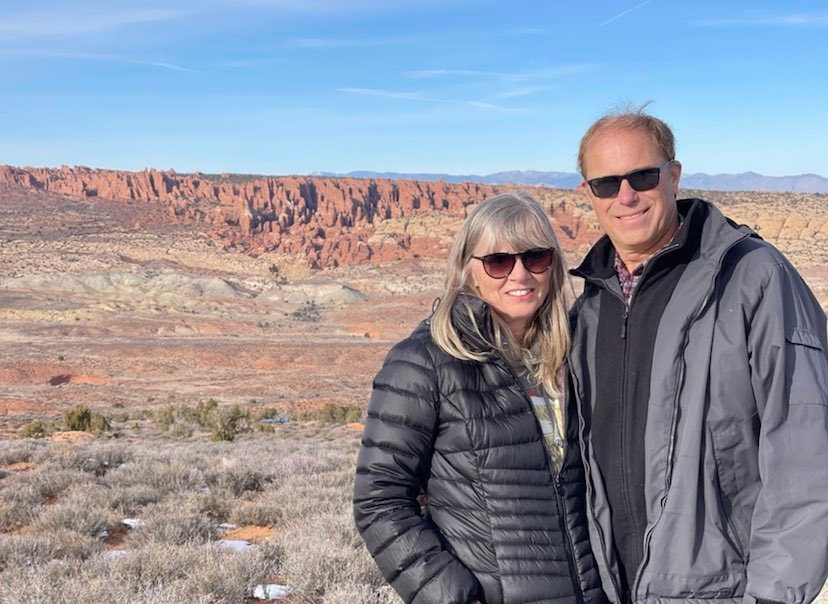 Sindy and Steve Graham traveled to Utah to sightsee and visit family in the week before Christmas and were initially intended to fly back Sunday. Provided

As Albert Leans Sindy and Steve Graham pulled into the Salt Lake City airport on Sunday to board a flight to come back home, they noticed Steve had received an email telling them their flight was postponed until the next day.

While traveling to Utah for a week to sight-see and visit some of their children for Christmas, they said they recognized there was a large winter storm traveling all across the Midwest. Their son in Albert Lea told them maybe they should get a different flight and that they would probably be delayed due to weather.

Sindy said when they woke up Christmas morning, the first thing they did was check to see if their flight was on time — and at that time it was.

So they left early to arrive at the airport with plenty of extra time — anticipating long lines for the holidays — only soon to discover their flight was in disarray along with thousands of others across the country flying with Southwest Airlines.

After finding out their flight was postponed, the Grahams said they turned around that morning and went back to their children’s house, and the next day they were dropped off again at the airport.

Sindy said the first time she saw the departure board that day, it said their flight was delayed 20 minutes.

The airline has scrapped more than 13,000 flights since Dec. 22, according to tracking service FlightAware. Though Southwest has declined to say how many people have been affected, it is likely that far more than 1 million have had a flight canceled. The cancellations started with the storm and spiraled out of control because of a breakdown with staffing technology.

“They said flights were canceled on the East Coast and they just didn’t have a crew,” Sindy said.

After the Grahams found out their flight was canceled on Monday, they said they stood in line for two hours, and the Southwest Airlines staff gave them each a voucher toward a future flight and got them set up at a nearby hotel. They rescheduled their flight for Thursday.

But when they woke up on Wednesday, Steve had received another email that their flight was canceled the next day. They drove back to the airport to get an extended voucher for the hotel and to try to reschedule their flight yet again.

A staff member at first told them there wasn’t anything going out until Jan. 2 but eventually booked them for  flights for Jan. 1 and then gave them more flight vouchers.

Once back at the hotel, they started considering other options to get home, including traveling by train, bus or rental car. They looked into prices and found price gauging with other flights and even rental cars.

“We reviewed all of that, and, time-wise, it just seemed like the best way to go was to rent a car,” Sindy said.

With the rental car and the gas costs, they anticipated having to spend $550 for the car to get back home, though some companies tried to charge as much as $1,300 for a one-way rental car from Salt Lake City to Minneapolis. Other companies didn’t even offer one-way rentals.

After driving the whole way back themselves, the Grahams arrived back home Thursday evening.

The couple said the Southwest Airlines CEO has been apologetic and has said the company will do everything in its power to reimburse people for reasonable expenses they incurred returning to their destinations.

They said while they were understanding of the situation and recognize that their situation was probably different than most others affected — because they had family in the area and other friends who offered them places to stay — there were some frustrations.

Steve said they were disappointed in the communications they received from the airline and noted that he had to take four additional vacation days off of work. Sindy had to reschedule an interview that was supposed to happen earlier in the week.

They said they were lucky they only had carry ons and did not have any checked luggage.

The couple said despite the challenging week, they will continue to fly with the airline.

Sindy said Southwest is actually her favorite airline and she feels strongly they will work as hard as they can to correct this issue.

“It’s kind of too bad for Southwest,” Steve said. “It’s a very busy time, and then the storm … it’s kind of an anomaly.”