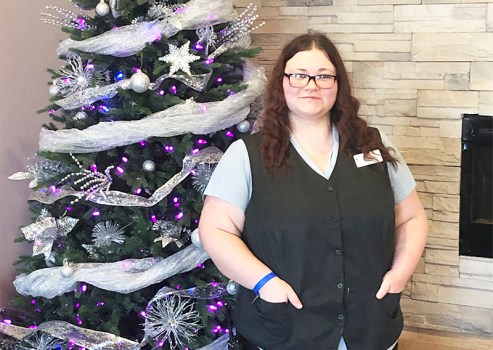 Destiny Althiser worked the front desk at the Country Inn & Suites by Radisson Friday helping a rush of travelers coming off of the interstate because of the hazardous conditions. Alex Guerrero/Albert Lea Tribune 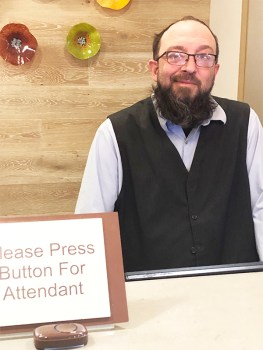 Last Friday’s frigid temperatures and strong winds caused interstates 35 and 90 to close in certain directions. The decision to close the highways left hotels in the area scrambling to accommodate a surge of unplanned visitors.

Destiny Althiser, who has worked at Country Inn & Suites by Radisson for 3 1/2 years, worked at the front desk Friday morning and said the place was sold out by the time she left at 3 p.m. She said calls started coming in by the time she arrived at 7 a.m.

“It was pretty crazy,” she said.

“We got booked very early [Friday],” he said on Saturday. “… The majority of the people that came in last night … didn’t want to stay in Albert Lea. They were kind of forced upon to stay here because of the weather.”

According to Boyer, a lot of travelers, families and individuals, were coming from interstates, with the majority coming from the Twin Cities, though there were visitors from Arkansas and Texas.

Boyer was already expecting to see more guests than typical due to the storms, and said his biggest concern was getting to work. Still, seeing all of the overnight travelers was surprising. By his estimation, he had to turn down around 50 potential guests.

He said guests were appreciative and thankful to get off the streets and into shelter.

But even with the surge in guests, Althiser said she thought the hotel was prepared for all the visitors.

“It was definitely a little discombobulating at first, but once you get in that motion you get used to it pretty quickly,” she said, admitting that she spent the last three hours of her shift doing check-ins and answering phones.

Boyer, who has worked at Country Inn & Suites for 1 1/2 years, said he had experienced snow storms over the last few years working at different hotels, but “nothing of this magnitude of the nonstop calls and the nonstop turning them down.”

According to Boyer, the hotel experienced a surge of calls between 7 and 9 p.m.

And despite not doing delivery Friday night, the Green Mill next door was also busy up until it closed early at 8 p.m.

Boyer was even surprised by the amount of people who didn’t get rooms, and said it got to the point where he had to direct people to the Armory for overnight shelter. The hotel also worked with other area hotels to find places for travelers to stay.

The whole experience reinforced the value of patience for Boyer.

“People are scared and people need a place to be,” he said. “When you can’t offer a place for them to stay, try to give them the best recommendations that you can and try to be there for them.”

And for him, time flew by.

“Everyone was so nice checking in and usually once we get sold out we get a few that are yelling and screaming at us,” Althiser said.

She agreed with Boyer in that when an event like a snowstorm happens tolerance can be tested.

“Tolerance with people, tolerance with not having a chance to sit down or take a break,” she said. “… It’s an endurance test.”

She thanked all of Friday’s guests for being understanding and patient while the hotel staff were still figuring things out.

Althiser, who is originally from Texas, admitted she had never experienced an event quite like Friday’s.

According to Boyer, there are 67 rooms at the hotel. Three people worked Friday night, not including housekeepers.