Are Minnesota’s winters getting snowier? Well, yes, and no 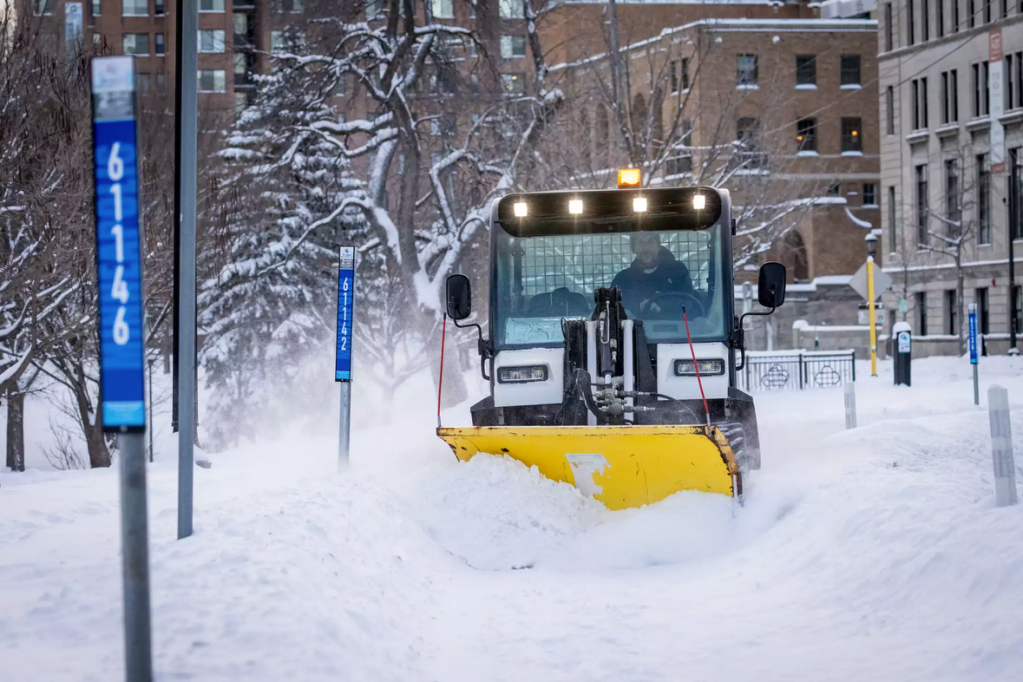 A driver plows snow in a bike lane on Oak Grove Street in Minneapolis on Thursday. Ben Hovland | MPR News

Paul Schurke watches snow levels much more closely than most across Minnesota. He’s a former polar explorer, after all. And his current business, Wintergreen Dogsled Lodge in Ely, requires snow to run sleds.

Six years ago, Schurke wrote a letter to then-Governor Mark Dayton expressing his concerns about climate change and the dwindling snowpack he had witnessed.

His dogsledding season, he wrote, had diminished by nearly 20 percent, from an average of 116 operating days to about 94. And he only needed a few inches of snow on the ground for the dogs to run.

But since then, that pattern has changed.

“The last four years have ranked among the most robust winters we’ve ever experienced up here. We’ve had more snow, longer snow seasons,” Schurke said.

That’s allowed Schurke to run dogs into early April, something he did regularly when he first opened 40 years ago. And that’s happened at the same time that winter temperatures have warmed significantly.

“We’ve had consistently cold weather, but the 40 below days are far and few between. Lucky for us, those seem to be a thing of the past,” added Schurke.

What Schurke has observed on the trails around Ely and the Boundary Waters matches what climatologists say is unfolding across northern Minnesota as the globe continues to warm.

As Minnesota winters grow significantly warmer due to climate change, they are also getting snowier. In some parts of the state, snowfall has exceeded record high marks over the past decade. And just like rainstorms in Minnesota have gotten more frequent and more extreme, heavy snows are also becoming more frequent and sometimes larger.

But just because we’re getting big snowfalls like what we saw last week, that doesn’t mean it’s staying on the ground. During this same period, Minnesota has also experienced record counts of winter thaw events.

“So even though we’ve got more thaws occurring during winter, warmer shoulder seasons and a shrinking of winter in general and a lessening of its severity in terms of temperatures, we are actually seeing snowfall— especially snowfall events— increase across really the entire state,” Blumenfeld said.

But it’s especially pronounced in Schurke’s neck of the woods in northeastern Minnesota, “where snowfall always tends to be heavier than other parts of the state.”

Northern Minnesota is one of the most rapidly warming areas of the United States. In the northeastern corner of the state, “a typical winter night is now seven degrees warmer than a typical winter night would have been at the turn of the 20th century,” Blumenfeld said. “That’s real, that’s observed.”

That’s played out primarily in warmer winter overnight lows. It just doesn’t get nearly as cold as it used to. But that has not resulted in less snowfall.

“We’re also finding that snowfall has either remained at kind of historically high marks during this period, or in some cases, it’s exceeded them,” said Blumenfeld. “And this is just one of many examples of how you can have trends that seem like they’re counter to each other, even as the climate is changing.”

Much of the state, during the 2010s, received nearly as much or as much snow as had ever been observed, Blumenfeld said.

Part of what’s driving that increased snowfall is that big winter storms, such as the blizzards that have slammed into Minnesota this month, are more common now.

“Heavy snowfall events, days where you get four inches of snow or more, have actually become somewhat more frequent over time,” Blumenfeld said.

Meanwhile, the heaviest snowfall on any given year also tends to be heavier than it used to be.

In northeastern Minnesota, especially along the ridgeline along the North Shore, that’s likely due in part to a warming Lake Superior, which is one of the fastest warming lakes on the planet. That, in turn, has led to significantly less ice cover, which has created more lake effect snow.

“So when you have decreased ice cover, you then have an increased season where you can get that lake effect or at least lake enhancement, with that moisture transport coming off of Lake Superior,” explained Ketzel Levens, a National Weather Service meteorologist in Duluth.

Another reason Minnesota is experiencing more frequent heavy snowstorms is driven by the same climate forces that are leading to more frequent extreme rainstorms.

Global warming has put more ocean water into the atmosphere. And that means there’s more fuel for passing weather systems that dump rain, or snow, on Minnesota.

That doesn’t mean that every time it rains or snows that the state is getting more than it used to. But there’s just more moisture available.

“And occasionally, that’s being turned into or converted into record or near record snowfall events,” Blumenfeld said.

But here’s the rub. Despite more big snow dumps, that snow is melting faster than ever. Across the entire state, Blumenfeld said, there were more winter thaw days between 2010 and 2020 than had ever been observed previously.

“And this was off the charts,” he said. “In some cases, the frequencies of those thaw days where the temperature stays entirely above freezing, in some areas, those frequencies were 50 percent higher than they had been the decade before, and two times higher than what they had been for the majority of the 20th century.”

Blumenfeld likes to use Duluth as an example, which has set several records over the past couple decades for seasonal snow amounts and individual snowstorms.

And the number of days with no snow on the ground in Duluth has increased by about 60 percent.

“So even though it’s snowing as much or more than it’s really ever snowed since we’ve been recording, we’re seeing less snow on the ground in general, fewer days with deep snow cover and more days with no snow cover,” said Blumenfeld.

“We’re not going to suddenly get storms like that every year,” said Blumenfeld.

But “it’s safe to say, for the foreseeable future, we can expect them to have increased frequency.” Some years will be drier than others, but “when you average it all out, everything points to more of these.”

Blumenfeld said he hears frequently from skiers and other outdoor enthusiasts that even if the quantity of snow has remained strong, the quality of the snow has degraded. There’s less dry, fluffy powder than there used to be.

Tracy Twine, an atmospheric scientist at the University of Minnesota, said it can be useful to look to other parts of the country for analogs of what Minnesota’s winters could look like in the future.

“And so you can kind of think of the winters that happen in the southern Midwest, maybe Missouri, southern Illinois, that’s the kind of weather that we might be seeing more typically in the future,” Twine said.

Twine co-authored a study earlier this year that found that in an extreme case, if little is done to slow global warming over the next several decades, that the number of days per year with snow cover could decrease by nearly two months, especially in central Minnesota.

“We don’t know exactly how all of this is going to play out in the future as our winters keep shrinking,” Blumenfeld said. “But right now, we’re in kind of a golden era for snowfall in Minnesota. Just keeping it on the ground has been the challenge.”