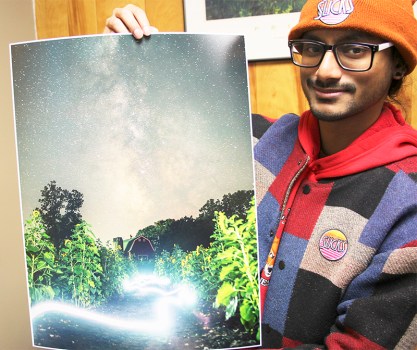 Jacob Schlichter with an image of "Sunflowers in Starlight." Alex Guerrero/Albert Lea Tribune 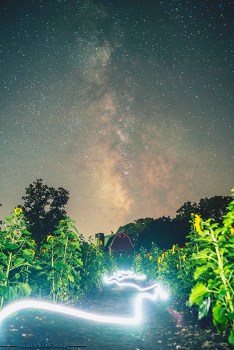 “Sunflowers in Starlight,” was taken at the sunflower fields in Manchester by Jacob Schlichter. Provided 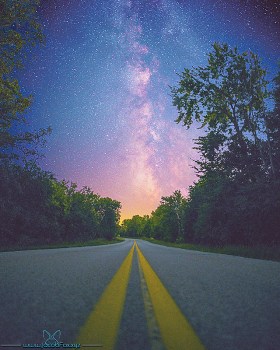 "HWY 105" will be one of the astrophotos Schlichter will have on display at the Rochester airport. He said it took took two years of planning and preparations for him to get the right shot. Provided

Jacob Schlichter is an Albert Lea photographer and fashion designer who grew up in the area.

His interest in photography goes back to high school.

“I saw a lot of my friends were running around with cameras and I wasn’t familiar with an actual camera as much as I was with a video camera,” said Schlichter, referring to recording snowmobiling on GoPro cameras.

From there, he transitioned to photography in high school.

“Right off the bat I was just in love with it,” he said.

He also loves capturing people in events and time in what he called event photography.

“It was just really cool to be able to capture all these people just in a moment of bliss,” he said, referring to photographs from concerts or festivals.

“I have always had a lifelong love of astronomy,” he said. “I used to want to be an astronomer, and then when I discovered photography I was like, ‘Wait a minute. There’s an intersection that I can put all my passion and love into?’”

He’s been going nonstop ever since.

And his passion for photography has led him to being recognized by the Rochester airport, after leaders of the airport put out a call for art. Schlichter figured that because Rochester has an international airport, visitors would likely be visiting local areas. And his three submissions all focused on local places.

He described his first piece, “HWY 105,” as an astrophoto that took two years.

“I spent that entire time scouting locations throughout the year, because in astrophotography even 15 seconds and your whole photo is ruined,” he said. “Everything is misaligned. So it took a lot of planning every night.”

He said he spent a lot of long nights looking for the right location. And he found the right spot on Minnesota Highway 105 seven miles south of Austin.

“I had to plan it for the summer, the right time of year for that Milky Way to be in the sky for the trees to line up with the leading lines,” he said.

He took the photo roughly seven miles south of Austin on Minnesota Highway 105 in Mower County.

His second submission, “Sunflowers in Starlight,” was taken at the sunflower fields in Manchester.

“I combined light painting and astrophotography,” he said. “… Astrophotography is basically the combination of astronomy and photography. Basically you’re taking photos of the stars.”

The photo is actually his second sunflower work.

“This time I lucked out because the way they cut the trails into the sunflowers actually made a really beautiful-looking path that lit up the barn in the background,” he said. “It gave me a nice background element with the foreground being the sunflowers and the light trail leading right up to the Milky Way.”

And depending on how complicated the artist wants it to be, an artist could get anything from a Milky Way photo to star tracking and doing star trails or deep-space photography.

Getting the shot wasn’t as simple as getting there and snapping away either, and Schlichter said getting the shot required a “pretty good understanding” of moon cycles, his positioning related to Earth, light pollution and knowing where to shoot.

“You need really, really good quality equipment to really pull this off in an effective manner that isn’t just gonna look blurry or noisy,” he said.

Lens quality was also important for astrophotography, something he described as “make or break.”

“You get a decent prime lens and the quality of glass is going to make all the difference in whether or not you get a pin prick sharp star, or if it’s blurry or you get the chromation on the edges of each star that’s making it off white or pink or blue,” he said.

In viewing his pieces, he wants viewers to gain a deeper appreciation for the natural beauty of Minnesota.

Schlichter first heard about the call after an email was forwarded to him, which he thinks was from the Albert Lea Art Center.

Though he’d done a gallery exhibit before, Schlichter admitted he usually shied away from submitting work as part of a competition, though he had submitted work for the state fair.

“I’m not the best at marketing myself or taking advantage of some opportunities,” he said.

The other reason he doesn’t do these: He doesn’t hear about them.

But he talked himself into submitting pieces for consideration, and said he thought this was an opportunity to submit work people might enjoy.

What convinced him to do this was his familiarity with the airport in Rochester and admitted to having a good time whenever he’d flown through there. He made the decision to submit a day after he heard about the call early this month.

Though Schlichter didn’t know when the work would be displayed, he knows it will be on the other side of Transportation Security Administration, meaning his work won’t be available to see unless you’re flying to or from the airport. He also said people in charge of the project were thinking about a public exhibition, but they were currently trying to get all selected artists together to discuss the possibility beforehand. The deadline for accepted artists to drop art off is Friday, and the work will be publicly displayed starting either late next summer or early next fall.

“I was just really excited,” he said after learning two of his pieces were accepted. “I was shocked, I was really happy.”

In the meantime, he’s working on winter pieces, some of which require knowledge of basic coding and “a few federal licenses” that take longer to complete.

“I have a really cool nature-inspired hat coming out, and I basically sew on about 140 different leaves onto a bucket hat so it kind of looks like you’re wearing a bush,” he said.

Anyone interested should visit https://getslicks.com to browse the store.