Southbound I-35 closing at Albert Lea; I-90 west of A.L. remains closed 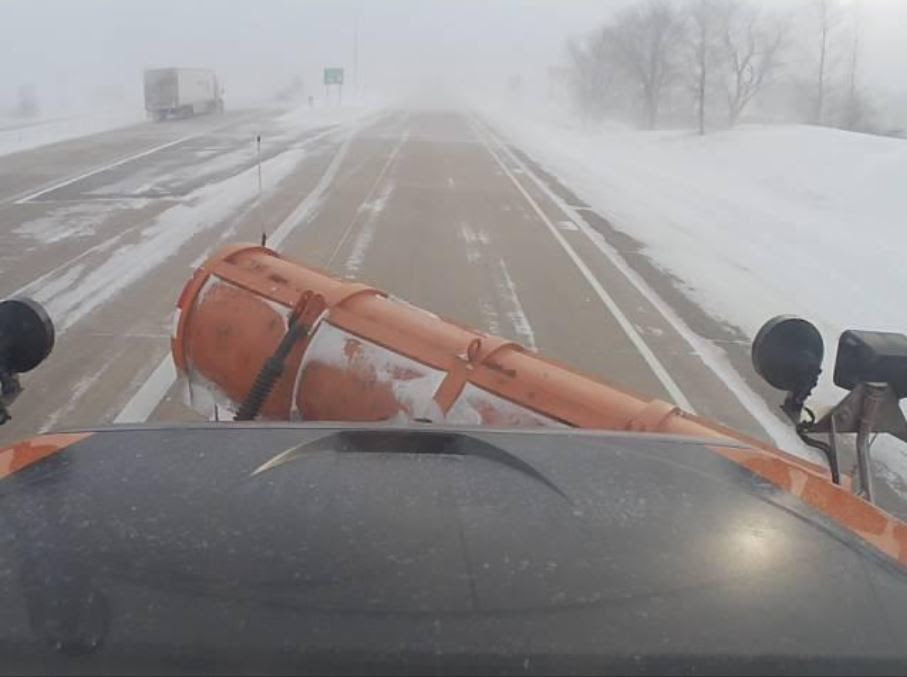 At Albert Lea, motorists will be unable to travel southbound on I-35 and westbound on Interstate 90. Both directions are closed beyond Albert Lea because of poor visibility caused by blowing snow.

I-35 northbound from the Iowa border remains open. Southbound I-35 is open from the north to Albert Lea at Freeborn County Road 46. 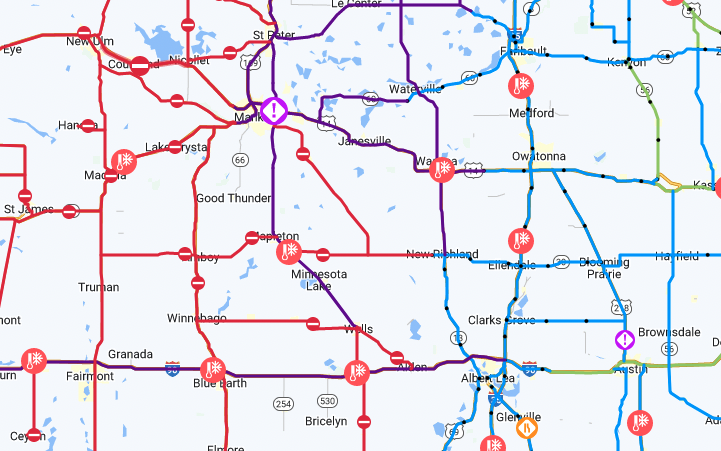 Interstate 90 closed again at Interstate 35 at 2 p.m., according to the Minnesota Department of Transportation 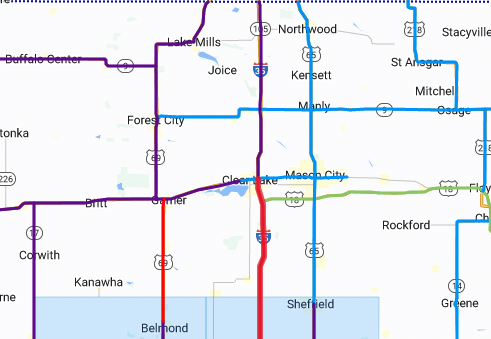 Southbound Interstate 35 at Albert Lea will be closing at 4 p.m. Image courtesy Iowa Department of Transportation

Interstate 90 west of Interstate 35 at Albert Lea is closing again at 2 p.m., according to the Minnesota Department of Transportation.

I-90 remains open to the east from Albert Lea to Wisconsin.

The closure is occurring again as blowing snow and poor visibility has increased west of Albert Lea to the South Dakota border.

All Faribault County roads will close at 2 p.m. Friday due to road and weather conditions, according to authorities. No travel is advised, and roads will remain closed until further notice.

Blowing snow is causing drifting and poor visibility across the region. Also, I-35 in Iowa is listed by the Iowa Department of Transportation as No Travel Advised. Drifting snow on I-35 and poor visibility in southern Minnesota has been increasing at this hour.

MnDOT will announce the highway’s reopening via its Twitter page: www.twitter.com/mndotsoutheast and the MnDOT Southeast Facebook group: www.facebook.com/groups/MnDOTsoutheast/. 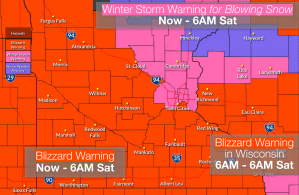 Blizzard conditions are continuing, with winds increasing and gusts as high as 40 to 50 mph expected.

A blizzard warning remains in effect for all of south-central Minnesota through Saturday morning, with significant drifting and reduced visibility. Conditions are expected to worsen  through the evening, and people are advised to not let their guard down.

The National Weather Service advises people not to travel unless absolutely necessary.

According to the Minnesota Department of Transportation’s Facebook page, Interstate 90 reopened west of Albert Lea. Travel conditions remain challenging, but MnDOT snowplows are pushing back drifts. Many other state highways in south central and southwest Minnesota remain closed or travel is not advised.

Freeborn County Sheriff Kurt Freitag said because visibility is declining throughout the county, county plows will be out until 2 p.m. today. After that, there will be no plows on county roads due to visibility and extreme cold safety concerns.

Freitag asked people to keep that in mind if traveling on county roads this afternoon to get home from work. People should make sure to have plenty of fuel, a charged cell phone and warm clothes.

State plows will continue plowing state roads and the interstates. He said Interstate 90 should be open soon.

A wind chill warning remains in effect through Saturday morning with wind chills of 35 below zero to 40 below zero likely.