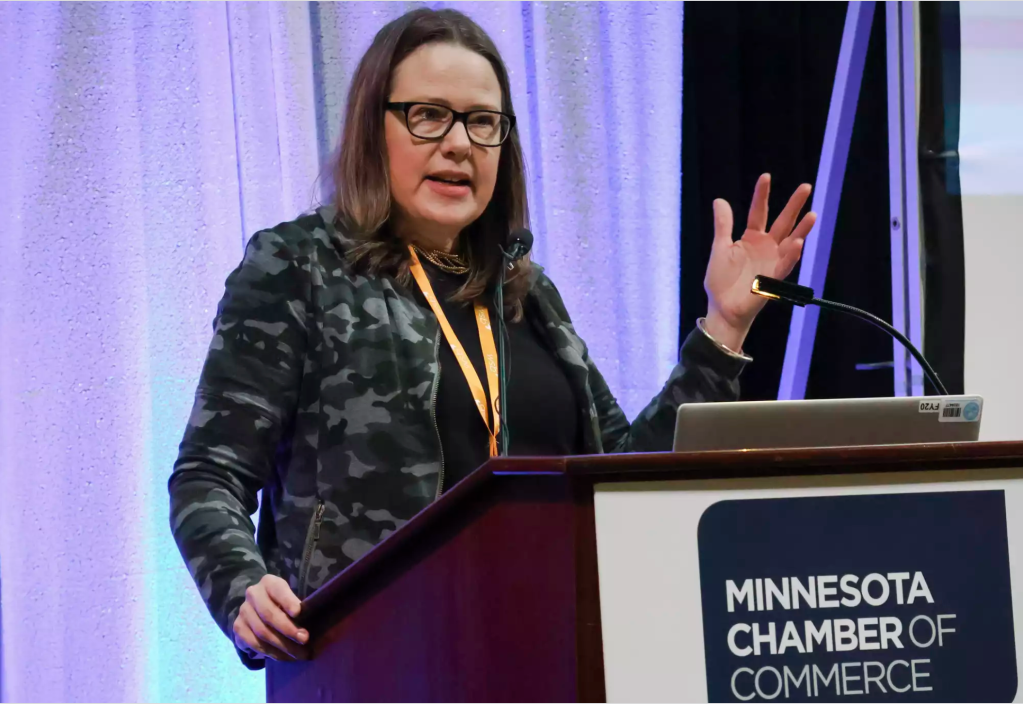 Susan Brower told attendees that Minnesota lost about 90,000 workers over the course of the pandemic, mostly due to the accelerating trend of baby boomers moving into retirement. She said the workforce is unlikely to grow significantly without major immigration or interstate migration to Minnesota. Tim Nelson/MPR News

Minnesota’s workforce shrank during the pandemic which was no surprise.

Businesses shut down, sometimes permanently and the sharp rise in the burden of child care, education and other family obligations hit women particularly hard.

“Despite that strong return of pre-pandemic labor force participation rates, there are still about 90,000 fewer workers in Minnesota than there were before the pandemic,” Brower told several hundred attendees at a Minnesota Chamber of Commerce Women in Business gathering on Wednesday in St. Paul.

She told the crowd that the state has one of the tightest labor markets in the country, and she said there’s no easy solution to getting workers on state payrolls.

Brower said automation can’t close the gap and other options are limited, because demographics are the ultimate cause of the “missing” workers.

“It’s not the great resignation. It’s not mothers, by and large, who have stayed outside of the workforce. When economists have looked at where the missing people are they found that it is just the aging of the workforce moving into those lower participation rates, more and more people in the older age groups in their late 50s, early 60s,” Bower told the group, including dozens of state legislators and soon-to-be-legislators.

She said Nordic countries have similar challenges, and have tried to encourage births to address their worker shortages, “with no luck.”

Brower said that the only intermediate-range solution will likely come from foreign immigration and migration from other states — although Minnesota now has years of net outmigration already cutting into the labor force. Climate change, ironically, may make Minnesota more attractive in some cases, she said.

She told employers to focus in the short term on keeping the workers they have, with flexible schedules, work and family balance and other accommodations.

“For those of you that can, now is the time to make your job as attractive as you possibly can, to compensate your workers as much as you possibly can,” she said. “The power really is shifting toward what workers want. They have more choices and they will make the choices that they need to make for them and their families.”

She told legislators Minnesota would be best advised to focus on policies that improve job quality, including open career trajectories, training opportunities and opening more opportunity for workers of color and workers with disabilities.