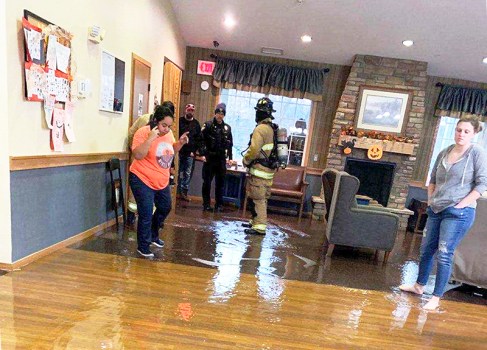 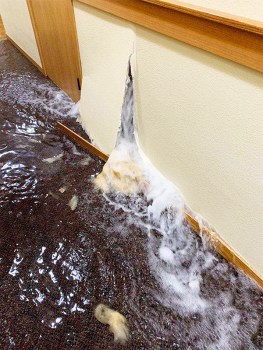 Water breaks through a wall at Prairie Senior Cottages during the Thanksgiving flood. Provided

Nothing can ruin a holiday like an unplanned emergency. Just ask Krystal Braund, regional director of Prairie Senior Cottages, and Dee Dee Mondragon, director of the Albert Lea campus.

Braund and her team spent the afternoon moving 22 residents from the center to St. John’s Lutheran Community nearby after flooding the afternoon of Thanksgiving.

According to Braund, the flooding started with a crack in the water main shut-off valve.

After being notified water was coming from the mechanical room, she said she heard water rushing at the wall and door while flowing out the bottom of the door and sides. Water covered the lake side’s living room, bedrooms, kitchen and laundry room. It was so high water covered her feet and up to her ankles at some spots.

So after she walked in, she began directing her staff to first call 911, then proceeded to tie her hair back and try to shut off the main water valve, an attempt that was ultimately unsuccessful.

“The water was freezing, and it was coming at you pretty hard,” she said. “I could barely see to navigate my way and I got thrown into some of the pipes or the shelving that was in there.”

Even firefighters were unsuccessful shutting off the valve on their first attempt.

Ultimately, the decision to relocate the residents to St. John’s was Braund’s.

“We knew that they had other levels of their building shut down, they were empty,” she said. “I knew they could hold all of my residents, if not most of them.”

The decision was made 15 minutes after she arrived at 4 p.m. To move that many people, she needed a school bus, which firefighters provided. They also needed five residents to be moved by ambulance, as well as a plumber.

Mondragon had a similar recollection of events.

“When I drove up to the campus there was police officers and firefighters walking around all of the grounds,” Mondragon said. “From what I understand they were looking for the shut-off outside of the building.”

When she arrived, she noticed the door was propped open and water was flowing. She also heard water flowing.

Mondragon said there was confusion and some fear among residents.

In total, it took only about 38 minutes to evacuate the residents from the time Braund arrived.

Braund began contacting families of residents around 10:30 p.m., after all residents were fed, in bed and accounted for at St. John’s, though she noted some families were at Prairie Senior Cottages as the flooding began and helped to keep residents on the side of the building where water had not seeped in, though water began seeping in to that area, too.

“A lot of [families] sounded pretty grateful that we handled it and that they were in a safe place,” she said.

“We’re very grateful the community came together,” Mondragon said. “Everybody was here very quickly. There was a lot of chaos.”

In total, residents stayed at St. John’s until Dec. 12, when they moved back.

“We’re beyond grateful for St. John’s taking us in and helping us out,” Braund said.

Damage costs to Prairie Senior Cottage are still being assessed.

Kathy Woodside, director of marketing and public relations at St. John’s Lutheran Community, said in an email that St. John’s was honored and grateful to assist in relocating residents.

“We were blessed to have an unused space to make their stay comfortable and safe,” Woodside said. “It was nice to have the opportunity to have them be part of our community, and we are proud to have helped our neighbors — and now friends — in their time of need.”