Richard “Dick” Kary, age 91 of Albert Lea, passed away peacefully surrounded by family on December 2, 2022. He was born on December 19, 1930 in Eureka South Dakota to Emanuel and Gertrude Kary. He graduated in 1949 from Java High School. He went on to obtain his bachelor’s degree from the University of South Dakota which he attended on a Babe Ruth Scholarship for baseball. He enlisted in the Army after college and spent two years in Germany. On October 16, 1954, Richard married Judith Rau and from this union their four daughters were born. He began his career working for Standard Oil and remained with them for 16 years. 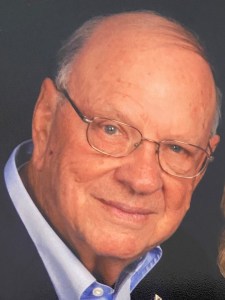 In 1971, Richard and Bob Phillips started South Minnesota Oil Company in Albert Lea employing many wonderful loyal people. He went on to co-found Food-n-Fuel convenience stores in the late 70s and remained an active businessman until the age of 90. Dick was very involved in numerous service organizations- he was a member of the Noon Kiwanis Club, SCORE, Shriners and was also President of Albert Lea Development of Greater Jobs for several years. Although born to be a businessman, he was also an avid outdoorsman and always made time for fishing and fowl hunting; in addition, he never missed a trip to the Cayman Islands in the winter with his wife, Judy. Preceded in death by brother, Dean Kary. Survived by loving wife of 68 years, Judith Kary (Rau); children, Liz Guenther (Mark), Katherine Kary (Sandy), Laura (Tom) Smith, Sue Severson (Shane); grandchildren, Kristine (Alex) Trueman, Dustin (Julia) Guenther, Jarrad Smith, Ashley (Ryan) Smith-Mikkelson, Leah Smith, Emily Severson, Nick Severson; great-grandchildren, Lincoln, Vaeda, Jaxon, Wells, Ashton, Lily; brother, Merlin Kary; sister-in-law, Donna Kary. A visitation will be held at Bonnerup Funeral Home from 5-7P on Wednesday, December 7, 2022. Funeral Service 11A on Thursday, December 8th, 2022 at United Methodist Church of Albert Lea, with visitation beginning one hour prior. Interment will be held at Graceland Cemetery in the Spring or Summer of 2023. Dick’s family would like to extend a sincere thank you to the staff of Thorne Crest for the love and care they provided to him. In lieu of flowers, memorials are preferred to the Kiwanis Club, Salvation Army or United Methodist Church.