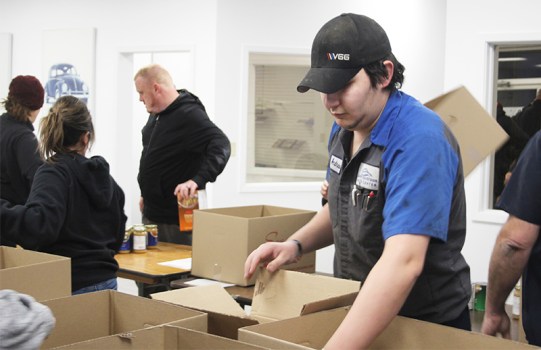 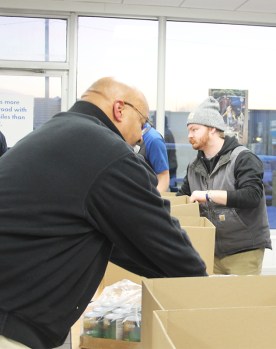 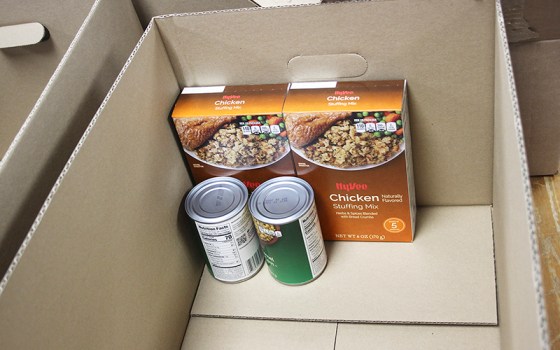 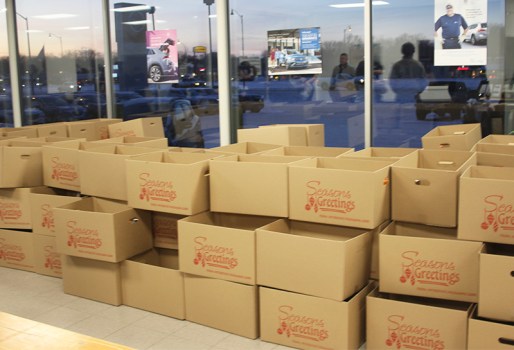 Company packages up, distributes over 150 boxes of meals

It seems the whole town is in the holiday spirit. Just look at Dave Syverson for an example, who partnered with the local school district this week to spread holiday cheer.

On Tuesday, between 20 and 25 members of the company packaged over 150 boxes of meals that were distributed Wednesday to families in need during a drive-up event for families who were selected by social workers at Albert Lea Area Schools.

“We knew there was a need for families around the holidays,” said Travis Stortroen, general manager of the dealership.

Stortroen highlighted the increase in food prices as one reason for the growing need for the event.

And these were not typical meals, as each one served between six to eight people, and each box contained stuffing, mashed potatoes, corn, green beans, gravy, a ham, buns, a pie and a case of water.

McVicker noted there were people at last year’s event who actually tried to donate money.

“We asked them to use it elsewhere,” he said.

He also noted that leading up to the holidays, people would ask if the food drive was happening.

Stortroen’s favorite part about the event was knowing families that may not otherwise be able to have a nice meal will get one.

There’s even a benefit for employees.

“We’ve gotten good at packaging food in boxes,” he said.

He’s been with the company for 6 1/2 years, and has been a part of the program all three years. For him, this was personal.

“I’ve been to the point in my life, I didn’t grow up with my family having much money,” he said. “We’ve needed help, we’ve needed food shelves, we’ve needed donations before to have good holiday meals.

“So being at a point now where I can be part of the other side of it and help other people have meals is something I love to do.”

He also said he has seen  relief on parent’s faces, knowing they’d have a holiday meal.

Lodin, who has been there for nine years, loved seeing people’s faces when they arrived and described the experience as “overwhelming” to remember.

“I love to see how excited they are for it and how us, as a team at Dave Syverson, come together,” she said. “And we love doing it.”

There was a reason the company did this before the holidays.

“People are traveling, social workers are off for school break, this is just a good time to do it,” Stortroen said.

Stortroen said feedback had been good, and it’s his hope more businesses in the area will do something similar.

According to Stortroen, all employees at that location pitched in, and those who were turned away from helping Tuesday planned to participate Wednesday.

“People are more than happy to chip in and do it,” McVicker said. “You’ll see people just thank other people for doing it and being here and volunteering. So it really gets everybody involved.”