There’s a method to the madness: City staff explain how decisions are made for snow removal 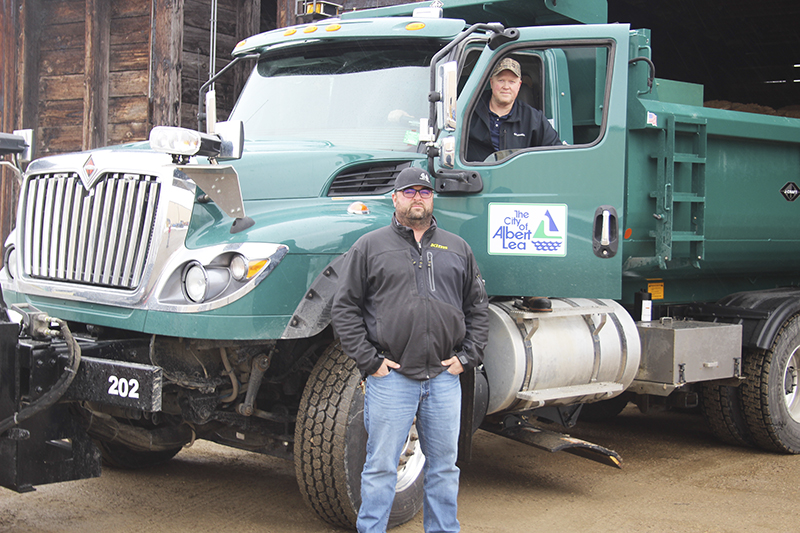 It’s December, and in Minnesota that means snow will be on the ground off and on at least through April. Just last week over 5 inches of snow blanketed the area following Thursday’s Holiday Bazaar.

But with temperatures usually below freezing for the duration of winter, how does the city of Albert Lea respond to excessive snowfall?

The first thing is to prepare for what could potentially be arriving.

“We prep all our equipment, figure out which staff is going to be coming in and assisting on the road,” said Ryan Hajek, assistant director of public works for the city of Albert Lea. “We have people that could possibly be on vacation, we have other departments that help out and maybe they’re gone or the other departments have projects or emergency projects, so we need to plan our staff accordingly first.”

In fact, in preparation for snowfall Tuesday, Hajek’s team was preparing for snow removal by checking oils, greasing, checking cutting edges, ensuring the city’s brining mixture was ready, spraying brine, ensuring there was enough of a sand/salt mix to treat roads and even checking road quality.

One problem with snow removal was determining if the snow will be in liquid or solid form, and that meant watching weather forecasts at all times to decide what needs to be done, with tentative plans made at the last meeting of the day at 3:30 p.m. and equipment ready to be deployed.

“They’re doing maintenance and stuff and doing other things out on the streets during the day, but typically to make the call and [say], ‘Hey, we’re going to come in and plow at what time?’ — that happens roughly probably at about 3:30 the night before.”

According to Street Department Supervisor Mike Lillibridge, trucks were ready for any snow Tuesday.

“There’s usually always some trucks ready and available,” Lillibridge said. “Say we would have got freezing rain (Tuesday morning). Those trucks were already ready to go.”

Based on when snow arrives, Hajek will plan a time for snow removal.

But what merits prep were slippery roads or if Hajek’s team knew ice was coming, in which case Lillibridge’s team puts brine down.

One misconception is that every street will be plowed when residents wake up.

But things happen, and Hajek pointed to the example of a truck breaking down. When that happens, someone else has to plow the area after they complete their own routes.

And then Lillibridge not only has to bring the truck back to the garage for repair, but also ensure that a plower — who also serves as a mechanic — is pulled from the road.

For the snowfall at the end of last week, Lillibridge’s team was out at 4 a.m.

“We plowed for almost three hours before the snow quit at 7 a.m.,” he said.

That means going slower, but if someone on his team goes too slow there won’t be enough momentum to push snow off the road.

Temperature also plays a big role in plowing. According to Hajek, snow is lighter and fluffier when it’s colder, making it easier to push.

There are also some common misperceptions Hajek and Lillibridge wanted to address.

“Everybody’s got the [perception] that they didn’t plow in front of my place or they didn’t come back,” Lillibridge said. “It’s got a lot to do with parked cars on the street.”

In fact, if cars are parked on both sides of the street, bigger plows might not be able to fit between the cars and a plow.

“If we didn’t plow somebody’s street, there’s a reason,” Hajek said. “Either it did accidentally get forgotten because we do have a lot of new guys on the crew and they need to know where their routes are.”

Another misconception was that everyone on the snowplow team knows how to plow.

“A lot of the training needs to happen during these snowfalls,” he said.

“That doesn’t include the trails, sidewalks and that kind of stuff,” Lillibridge said.

Depending on the time of a snowfall, plowing starts at 2 a.m. unless too much snow is expected to fall later or visibility makes plowing unsafe.

Snowplowing and ice control will only happen when there are 3 inches of snow or more, snow drifting causes travel problems or ice affects travel. Priorities for treatment include hills, controlled intersections, bridges and curves; arterial and collector streets; school zones; bus routes’ and commercial and industrial.

“[Removal] can fluctuate just a little bit depending on wind and stuff like that,” Lillibridge said.

Priorities are determined by traffic and access for emergency vehicles.

“I think we do such a good job that [residents] get used to their snow being gone by 5 a.m. every single morning,” Hajek said. “We have a snow fall like this last one where it came a little later. We didn’t want to come too early because … we would have been plowing instead of for eight hours, we’d have been plowing for 12 hours and then we’d have to pay a lot more overtime.”

Hajek also said the city didn’t have an even-odd ordinance because having one would take three days to plow.

“Then you got to plow the odd [streets] one day, the evens the other day and then we would be hauling,” he said.

He recommended people not park side by side on city streets and try to move or park a vehicle in a different spot when possible.

He also noted they would have to involve police and tow trucks for people who didn’t move their cars.

And for homeowners, he suggested not plowing the end of driveways until after a plow had been by and it appeared more city plowing wouldn’t be occurring.

For a complete list of rules and regulations about snow removal, visit https://cityofalbertlea.org/departments/street-department/snow-removal-policy/