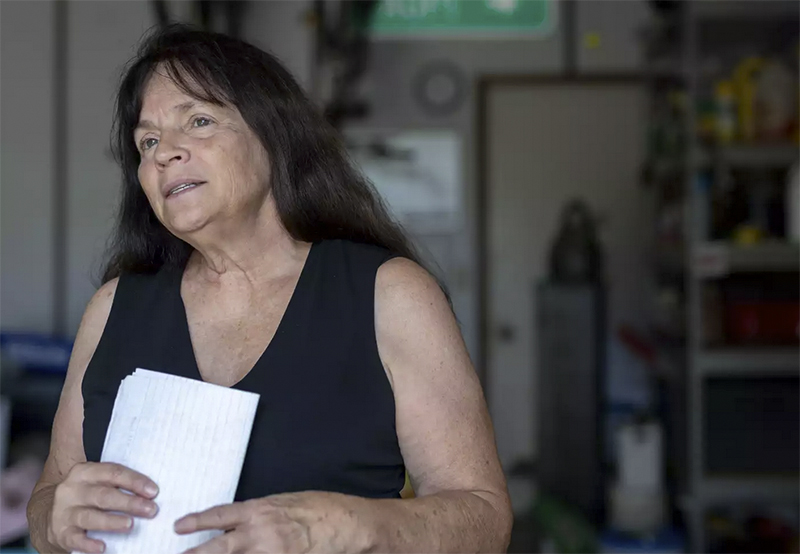 Taopi mayor Mary Huntley looks out from her garage. She brought MPR News reporters inside to show them a clock, stopped at the time the tornado hit, she had salvaged from the wreckage of the nearby city hall building. Ben Hovland/MPR News

The April 12, 2022 tornado damaged every structure in the southeastern Minnesota town of Taopi.

Mayor Mary Huntley first rushed to rescue her now 95-year-old mother from her damaged home, then took time to survey the citywide destruction.

“I remember wandering the streets at three in the morning, just looking around and thinking what are we going to do? But in the morning, it’s just you get up and you do,” recalled Huntley.

The storm destroyed 10 homes in the town of 60 residents south of Rochester about four miles from the Iowa border.

Mayor Huntley can look out her window and see four new homes and two still under construction.

“So when I look out at Taopi, I’m seeing a whole new landscape. I’m seeing a town that is more new than old,” she said.

Seven of the 10 homes destroyed in the storm are rebuilt or under construction, the mayor said, a sign the town is coming back.

The population of Taopi dropped by about 15 residents after the storm, but Huntley thinks many will return as housing is available. Two landlords chose to not rebuild destroyed homes, but one of those properties was sold and will be rebuilt she said.

The community of 170 just south of Alexandria on the northeast shore of Maple Lake suffered significant damage. About 40 buildings were destroyed in the storm, some three dozen had major damage. Some were seasonal cabins, many are year round homes.

The recovery is painfully slow said Mayor David Reller. He only knows of one home that’s fully rebuilt and occupied by a family. Many damaged homes are still in the process of being demolished.

“With all the snow on the ground, just looking down Forada Beach Road, it looks like bombed out area,” he said. “Trees that mostly are trunks missing a lot of branches. It’s depressing.”

Many residents are struggling with the economics of rebuilding, said Reller. They were shocked to find their homes were under insured because property values have increased in recent years, while construction costs inflated.

“Homes that they need to rebuild, it’s going to cost quite a bit more than the insurance is covering”, said Reller. “And so, you know, just their their frame of mind, their thought is it’s a bit depressing.”
In Taopi, donations poured in after the storm destruction. Mayor Huntley said more than $250,000 was distributed to residents to help pay rebuilding costs, and the donations did more than help pay bills.
“It was that spirit of community, people we did know people we didn’t know, who cared about us,” she said. “That’s where the hope came from. People really do care. And that I think kept the spirit alive, that this is a little city worth saving.”

In contrast, a fund set up by the city of Forada collected $29,000, money that will be used to replant trees across the community. The Alexandria Response Fund collected and distributed $43,000 to Forada residents.

Reller has heard from many homeowners who are facing the option of borrowing money to bridge the gap between insurance and rebuilding costs. Residents can qualify for low interest loans from the federal Small Business Administration.

“I know some families and I mean what they were dealt they don’t how to recover from,” said Reller. “Where you had a home that doesn’t exist, you have a mortgage, but you don’t have a home. You’re under insured, you lost two vehicles. You’re paycheck to paycheck to paycheck, that’s a common theme.”

The city is still waiting for some federal disaster aid said Reller, and while Forada has received significant help from the Douglas County emergency management staff in negotiating the recovery process, as mayor it’s been a tough year watching residents struggle.

“You hear the stories, you absorb them and then you sit on the city council and [ask] what can we do as a city?” said Reller. “In a way you’re powerless.”
Reller is stepping down as mayor at the end of the year to take the job of Forada city clerk.

He’s optimistic the city will see recovery efforts take off in the spring.

“City council and public meetings happen in my dining room at my house,” she said. “It comes with the mayor’s job I guess, my house is our city hall at this moment.”

She said a new city hall would be a thank you to residents who persevered and kept the town alive.