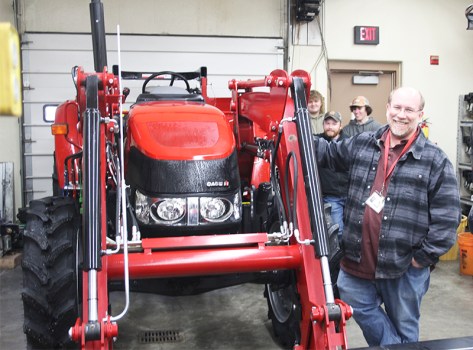 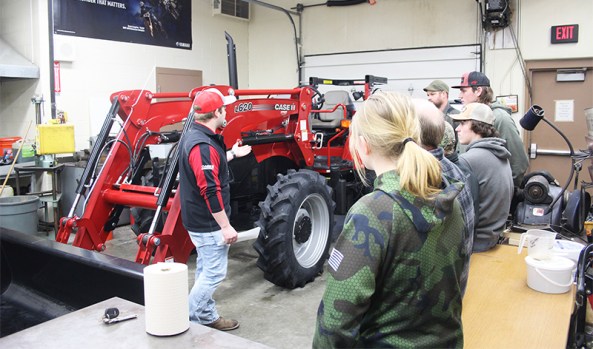 Students from the FFA club listen to a presentaiton about a utility tractor, the type that will be used as part of the Minnesota FFA Agricultural Technology and Mechnical Systems Career Develpment event. Alex Guerrero/Albert Lea Tribune

There is a tractor inside Albert Lea High School, and it’s not by accident.

Jeff Jenson, agriculture and industrial technology teacher, wanted students in the school’s FFA program to be able to examine it in preparation for the annual Minnesota FFA Agricultural Technology and Mechanical Systems Career Development event.

“It’s basically an event that has students study different areas of agriculture mechanics — small engines to welding,” Jenson said. “This year it happens to be utility tractors.”

Students will study different areas and then compete with students from other schools in the same topics in a regional contest at the end of the month. The top three or four scores will then move on to a state competition at the University of Minnesota-Twin Cities.

Part of the contest includes written knowledge, which will test student’s problem-solving skills.

There is also a practical portion that involves physical skills such as welding, plumbing and measuring. It will include competing against other students in performing skills.

And with the utility tractor, there could be a set of questions about it, such as if it had enough oil in the crankcase or its serial number.

“It depends on who is writing or creating the contest — what kind of questions they want to ask,” he said. “They’re generally different every year.”

Senior Isaac Shea has been involved in FFA since eighth grade and comes from an agricultural family.

“My great-grandpa and my grandpa had dairy cattle, and so I remember when I was young I used to go out to their farm all the time, and my grandmother was president of the FFA when she was growing up,” he said. “So I’ve just been pretty involved.”

Shea plans to enter a career in welding.

Fellow senior Cody Laskowske decided to join because he was considering a career path in agriculture before deciding a medical career would be more appealing. And though he’s no longer considering being a dairy farmer, he was happy he joined.

“I’ve loved every minute of it,” he said. “We have a great community here in the FFA culture — great people around.”

He said some of the skills he has practiced in the agriculture mechanics program, such as welding and pipe sweating, were essential for running a home.

“It provides connections from what kids can learn in school in the different courses that we have at school such as small engines, welding, electricity, machining/manufacturing, woodworking and others,” Jenson said. “It gives them the opportunity to study further [in] those areas and to exhibit their skills by competing against other students that may have those same educational opportunities.”

Jenson himself participated as a child, where he said he experienced many of the same challenges these students will face. One year, his team at Albert Lea High School even qualified for state, where he placed seventh.

“It was eye-opening to see the wide range of questions and topics that they covered at the state contest compared to the regional contest,” he said.

According to Jenson, the FFA program has participated off and on for several years, depending on when students were interested in it.

“These students have been working on studying things since probably December, beginning of December,” Jenson said.

This is his eighth year teaching at the school, while this was the fourth group he has worked with for the contest. Prior to Albert Lea, he helped teams with the same competition in Winthrop.

“I like to see students connect what they’ve learned in school in something outside of school they can transfer on to a career,” he said.

But even for students not interested in agriculture, he encouraged students to get involved in some type of activity, whether sports, drama or something else.

He also thanked Bob Pike, a resident field service technician, for helping him with FFA.

Jenson estimated there are 28 chapters of FFA in Albert Lea’s region.